“Ghost bikes” are bicycles that are painted stark white, tires and all, and erected by friends as a memorial at the site where a cyclist has been killed. Someone mentioned my white bike looked a little like a ghost bike, to which another wag replied, “Yeah, maybe if the ghost was Elvis”. I don’t normally name my bicycles, but this one has become the “Ghost of Elvis”. 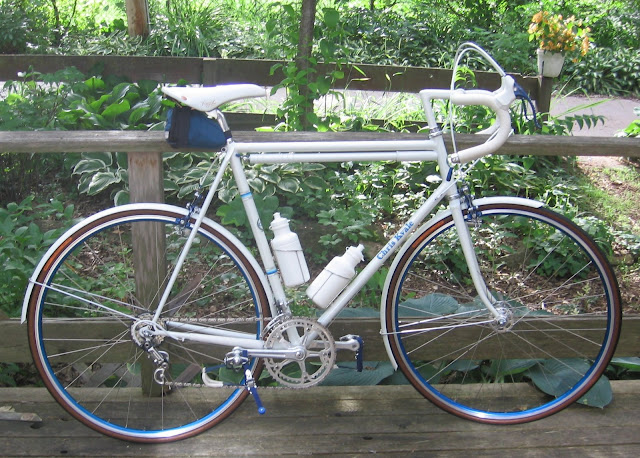 The Ghost really isn't as tacky in person as it is in photos - which, let us hope, could be said of Elvis too. It's a simple pearlescent white with blue trim. To some less discerning eyes there is apparently too much white and the blue components are over the top. In fact, it has been compared to a pink flamingo, a desert sunset on a van, or a black velvet painting – which I don’t understand at all, as it’s obviously not black. Whatever others see, I love it and perceive a beauty that maybe lesser eyes cannot…and even so, it was not something I had any control over.

The Ghost is a 1982 Chris Kvale, built by a man I consider a master of his craft. When I bought the bike it was used. It wasn't fancy, but had graceful proportions and delicate lug filing. It was mostly a “form follows function” machine. It had been raced for years by a fellow from Minneapolis, who suddenly and unexpectedly... got old. I wasn't buying an “Elvis bike”. I was buying the old "Johnson bike".

One afternoon John Barron and I were poking around his basement and I stumbled across a box containing a NOS blue Modolo Pro brakeset. They sparkled. They sparkled like jewelry. My wife wears sapphire and diamond jewelry. These brakes looked like sapphires and reminded me of my wife. And they were certainly a damned sight cheaper than the earrings were. And unlike the earrings or the old Campy brakes, they would actually stop a moving bicycle. I wrote him a check.

My friend Dan Ulwelling was pushing a set of NOS 1972 Mavic SSCs which he thought would look good on it, but I resisted, mostly because I was trying to get rid of the hassle of sew up tires. After Dan died I mentioned this to John Barron. Some time later he called to tell me he had finally found a set of blue Mavic Open Pros, which looked similar to the famous SSCs. After all his effort what was I to do? I sent him another check. 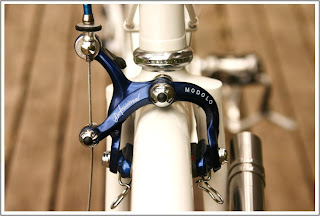 Later I bought fenders, mostly because I like the randonneur look, rather than because of their functionally - having neither, I prefer the illusion of endurance rather than that of speed. When Chris Kvale was respraying the frame he asked if I wanted the fenders done too. Painted fenders? It had never entered my mind. So I deferred to the master - the frames original creator, and had the fenders, stem and rear light painted to match the frame. (Actually, he pissed and moaned about it through the whole process.)

The white seat. I don't know where the white seat came from…or when it appeared. It just seemed to be there on top of the seatpost one day, slightly worn, as if it had always been there.

Then the Cossack showed up with white elkhide sew-on bar wraps. I think we can agree that it's always good thing to match our leathers if at all posible.

So as you can see, I was the victim of things beyond my control. I was a pawn in a darker game. It was all the fault of the others - Dan, J.B., Lorna, Kvale, the Cossack, and of course Elvis himself. Now Hiroshi at the Jitensha Studio has shown up with cute little Frenchy style front bags which he can order in white or navy. A double whammy - white or navy? And possibly Curt Goodrich or Ahren Rogers can make a small, inconspicuous front rack that won't infer with the sidepulls - and it could be painted either white pearl or sapphire blue. Two more names to add to, what I can only conclude is, a conspiracy.

Of course that doesn’t explain the amazingly tacky blue tires that appeared late last summer. (Only because the white Michelins that Scott Davis had were too tight. He should probably get honorable mention.)

We can certainly agree that it's important to match our leathers wherever possible.

I think a navy canvas bag would show wear much less. Unless, the bag were white (perforated?) leather, in which case some wear would enhance it's appeal and lend character.

It is important to match our leathers, and also to make exceptions.

In the photo, the blue seat bag works because it allows the saddle/ seat cluster to stand out. I would go the same way with the front -- you want to see those lines, and all white would wash it out. The figure needs a ground.

How about a full-grain 7-8 oz leather case, blue, with white stitching (or lacing, if you want to really Elvis it up) and nickel plated roller buckles?

The blue saddle bag is history. I have a blue canvas Inujirushi bag awaiting the completion of a bag/decaleur combo by Curt Goodrich. Thte white bag would have nice nice though. Incidently the white elkhide bar covers are gone in lieu of white perforated cowhide and the blue tires (never photographed) have been replaced by white tires. Inspite of all the silliness it is a wonderful riding bike, my favorite of the handful I own.