Return of the Cup 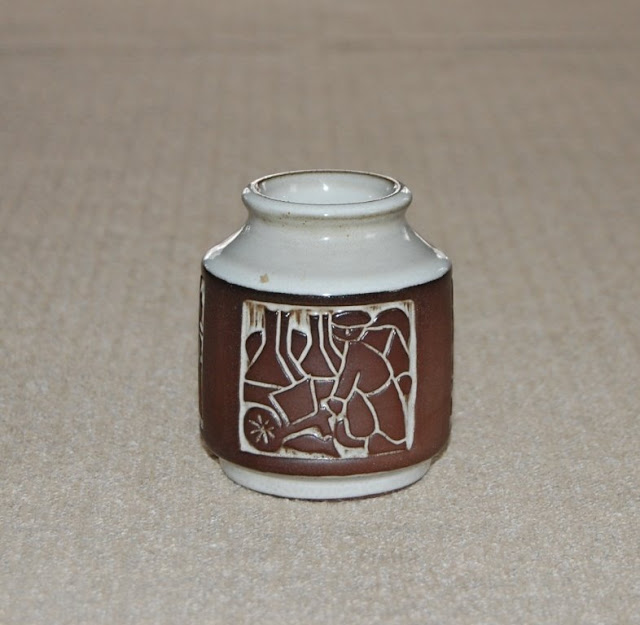 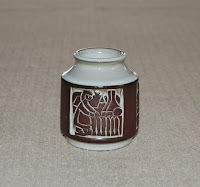 It's a small simple vase; really more of a cup. There are three scenes of daily life incised into the clay. Many people would describe it as crude rather than beautiful. Beauty does tend to be in the eye of the beholder though. 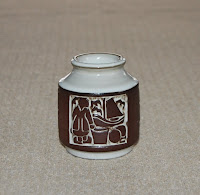 My Grandfather Neil was born near Aalborg, Denmark and my Grandmother Nellie in Iowa, a first generation Danish American. Years ago my Aunt Kathleen and Uncle Harold went on a trip to Denmark to visit the land of of our ancesters, and returned with the vase as a remembrance for my Grandparents.
For years the cup sat on a shelf with my Grandmother's treasures. Tucked among the delicate porcelains it looked a little out of place, like a bucolic country cousin that the family finds just a little embarassing. It was something I could relate to it. Like many of her generation, Grandma simply couldn't appreciate a wabi-sabi quality in things. After Grandpa died and Grandma was downsizing and simplifying her life she gave me the vase because I had always admired it. In my house it shared a shelf with raku pottery and antique wooden cooking bowels, polished by handling and ovalized by time. It fit right in. 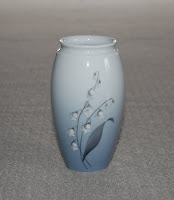 Shortly after Grandma died, Kathleen and Harold were visiting and the vase caught my Aunt's eye again. She obviously wanted it and we arranged a trade. She got the cup and I got a piece of Danish porcelain, which had also been my Grandmother's. I still have the porcelain, but it only comes out for a week in the Spring. We fill it with Lily-of-the-Valley like Grandma Nellie did; then it's back into storage for a year... safe from it's rougher companions on the open shelf.
After Kathleen died, Harold moved back to the community and bought a nice apartment in a retirement community. Recently, after a nice meal out, we returned to his apartment for a gin and tonic. As we were talking, he mentioned that he had accumulated a lifetime of objects, that his children either didn't want or didn't have room for, and we could take what we wanted. I didn't hesitate. I asked if I could have the vase.
It's back home again on my shelf.