At our cottage in Lanesboro we don't have much on-street parking, but as the boulevard is very wide and there is no curb, we just pull the car off the road - note the tire tracks. 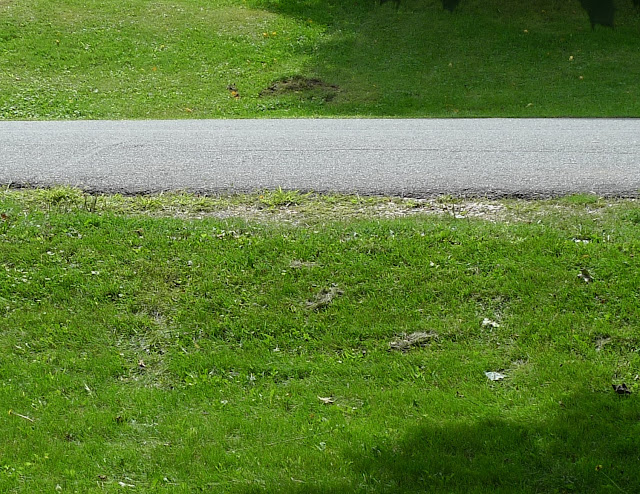 Evan, the young man who mows our yard, is twelve years old, an impressionable age. He needs an older, wiser man to misguide him. I have volunteered to fill that roll. The car needed to be moved so he could do his lawn maintenance thing. As at that age I was driving a Massey-Harris 44, I felt it was time for Evan to take the wheel. When I asked him if he wanted to move the car, he seemed stunned, claiming that he didn't even know which pedals to push. I assured him that there was no problem, I would talk him through everything. So when his father and Lorna were momentarily distracted, Evan and I got in the Honda, moved the seat forward, strapped in, and carefully reviewed the controls. After I checked both ways, we made our move. There was not another car in sight. What could possibly go wrong? Evan eased his foot on the gas. As it was an uphill slope I suggested a little more gas. We went up onto the street at a pretty fair clip. As we were going across the street, I said, "Brake ... BRAKE!" Evan did the logical thing. He pushed his foot down hard. On the accelerator. We slammed to a halt when the trailer hitch and brackets buried themselves in the slope of Keith Burmeister's yard across the street.

In the tradition of good sportsmen everywhere, we dug the chunks of sod out of our undercarriage and replaced the two foot divot. The grass is still a little torn up, but I think it'll eventually come back.

I believe this goes in the category of "no good deed goes unpunished".

That young man will remember you for his lifetime.

You are helping him!

Oh Gunnar, I can see Lorna shaking her head in my mind's eye! Whatshisname, the radio host guy, would recommend a slab of rhubarb pie about now.

Lorna and the lad's father were sitting on the deck when they realized what was transpiring. When the predictable happened, he said Lorna actually hung her head between her her knees in dismay. No pie was served, but Eric and I did have a beer.

Glad to hear the adventure ended on a high note. Hopefully the beer was a good craft brew. I'm sure that Evan will have an endless supply of stories to tell around the campfire after a couple of summers of your tutelage.

You've probably inclined the kid toward safer driving for the rest of his life -- and the divotee is complaining -- so, all in all, I'd chalk it up as a successful life lesson.

Jeez Jimmy, that just brought back all the stupid things we did, as a team, in cars and pickups.

Good place to experiment with mass, motion and mother earth! You have taught (or rather, "he learned") a valuable set of lessons there. Well done. Do it more often.