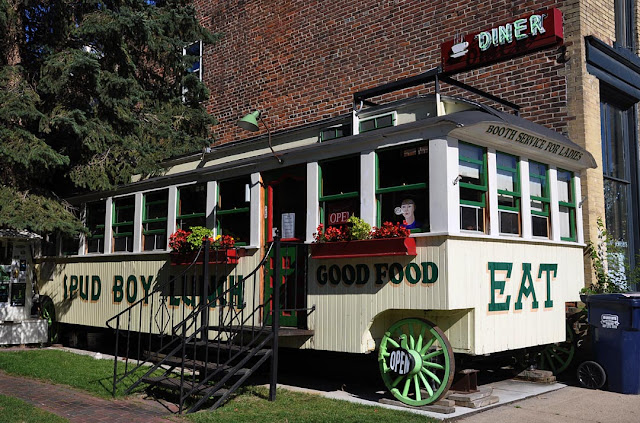 Two of the neighbors at our cottage in Lanesboro are Gordon Tindall and his wife Valerie. I do not know Gordie and Val well, but it's hard not to admire a man who's only car is a 1951 Hudson Hornet. 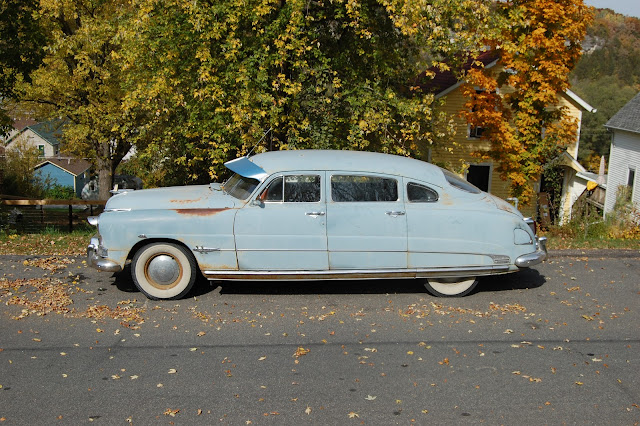 Gordie is a cook and a...a...a restorer. He works on old houses, old cars, old things that need saving. He fell in love with vintage diners and has restored and operated three of them.  The first one, in Decorah, Iowa, he sold to a man who shipped it to France. The second one, the Red Rose Diner, is in Towanda, New Jersey. He ran that one during the day and at night he completely rebuilt another one that had been found in Ohio, stored in New York City and eventually shipped to Towanda. This one is special because of it's age - at least 1927, and the fact that it is the only one left with wheels. It was tentatively going to be the Yellow Rose Diner. When he completed the rebuild he dubbed it the Spud Boy Diner and he shipped it to Lanesboro, Minnesota.

Vintage bicycles? There are a number of blogs devoted to vintage diners, Here's one with a long pictorial history of what has become the Spud Boy diner in Lanesboro. Gordon had a friend in Towada who recorded a lot of Gordie's life, including the diners in YouTube videos. We should all have friends as caring as Gordie's. A YouTube search of Spud Boy or Gordon Tindall yields a lot of videos. Here is a couple of the videos.


My brother and I will be having noon lunch at the Spud Boy tomorrow. :-)

Post a pix of the Spud Boy's menu and what you order from it.

That almost assumes I carry a modern phone with a camera. I do not. I'll try to remember to pack a camera.

Yes, take it along and give us a photographic tour of the Spud Boy.

Well at least he hasn't had a car payment for a while.