Yesterday I picked this one off eBay. It's not one of those rare, collectible things that makes some people get damp, but it's a very nice bike to bring down and ride in Texas.

Some of the top end Nishikis for the European market were supposedly made by Colnago, but this one was built in Japan in the late 70s (?) by Kawamura. After the Japanese exchange rate got out of hand, Nishiki production moved to Giant in Taiwan and the brand became a bit more of a commodity. The Ultimate was the top of the line (though possibly not cataloged), original full Campagnolo equipped, even down to the Campy rear dropouts. On a Japanese bike!

As someone observed, "The irony is, of course, if it were more common, more famous, but a less well built European bike, it'd going for twice as much." For instance, Silk Hope's reaction to my buying an old Japanese bike was, "WTF?"

And if it was an expensive vintage European bike, I wouldn't have bought it. 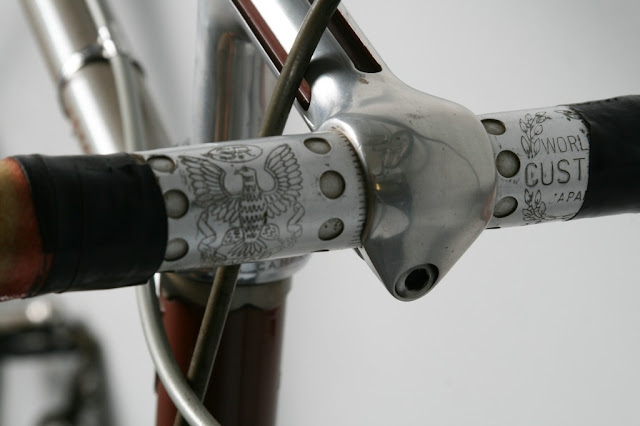 Very nice. I still have the bike I raced on for three years in the late 70's. I bought it new as a frame in 1977. It's a Japanese made Nishiki Pro. It is a solid color called champange. It's looks the same as the color on yours. However mine has vertical rear dropouts. Very rare to see in 77.

Gunnar I have to admit she seems very refined. Nice color and great shorelines on the lugs. How does she ride?

Ride? Not very well actually. She hasn't been shipped to me yet. Even if I did hold her in my hands, it's 40F and drizzly off and on. It's warmer indoors.

Gorgeous. Even I can appreciate that. Well done.

Makes perfect sense to me. And the engraving on the handlebars is classy, too.

A Nishiki Ultimate is as well built as anything coming out of Europe at the time!

I have two Japanese bikes and really like them. Enjoy!

I do not know. I would guess Italian, but the bicycle has moved on to another home.