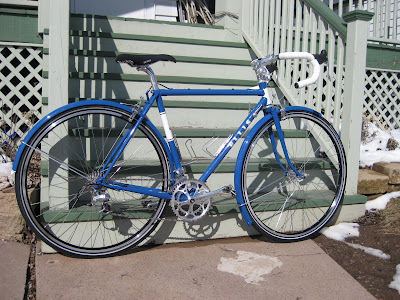 Doug of the Northland, occasional commenter to this blog, is the owner of this custom beauty, an Ellis, made by David Ellis Wages of Waterford, Wisconsin. Take a gander at the full-wrap fender and particular it's perfect fenderline. This would seem to be an easy thing to do. Take my word for it, it ain't. The frame builder has to have everything perfect and then the bicycle builder has to have his act together too. Ellis Cycles "Since 2008", is a little misleading, as Dave Wages has been building frames for 15 years and has won a number of show awards since hanging out his own shingle. And just a word about Doug and his creds. He lives without an auto and commutes a fair distance year round...in Duluth; Duluth, the land of cold, snow, ice and HILLS! I've been to San Francisco. I've been to Duluth. San Francisco has gentle slopes. Duluth has hills. Also, he completed the 2008 Arrowhead Ultra 135. Enough said.

The fenders are Honjo fluted fenders. Dave had me send him the fenders before he started building the frame. He pre-drilled all the mounting points prior to painting. They really turned out nice.

In case anyone was wondering.

I love the way links take us to so many wonderful places. I peeked around in your blog and like what I see! Cheers.
Jeff