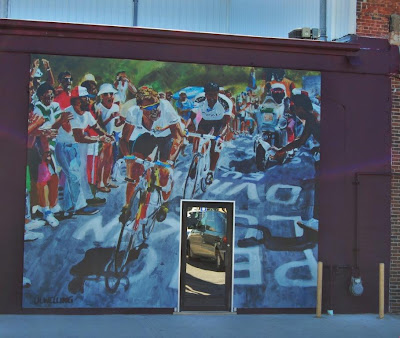 Recently the Rydjor Bike Shop mounted a large print of a Dan Ulwelling painting around the rear door.


Dan Ulwelling was a friend who owned the Rydjor Bike Shop. We discussed art, politics and family, but it was a love of vintage bicycles that was our primary bond. Although he was 10 years younger than I was, in someways he was a mentor - someone that I could ask advice on any subject and get help, not bullshit. Dan’s office was at the back of the shop, elevated so it looked over the shop, but more importantly to me, it was at eye level with his large collection of vintage racing bikes. When the traffic was a little slow in the shop, we would sit up there among his paperwork, paintings and sketches, looking at the bicycles hanging from the ceiling and he would pick a bike and tell me everything he knew about it – everything from the marque’s history, the bikes history, to the tube specs and components - which were original and which he had replaced. Over the years we critiqued maybe 30 of them, one at a time.

At first meeting Dan might have seemed to be a simple person. He was quiet and modest, but with a kind sense of humor. As time passed I grew to know him better, and the layers slowly peeled away. It became obvious he was much more complicated, very intelligent with varied interests. He read a lot on many subjects, enjoyed drawing and painting, cabinet making, and racing vintage motocross motorcycles as well as his bicycles.

About five years ago Dan was diagnosed with terminal cancer. He was very up front about it, not feeling sorry for himself, but accepting it in his own philosophical way. The form of cancer he had normally would take years to run its course, but 2 1/2 years ago Dan died suddenly, devastating all of us. The shop had a carbon Trek on display that had been a Lance Armstrong bike. It was taken off its stand, pushed back in a corner, and replaced with Dan’s bike - his daily rider, along with his cycling gloves and shoes; a shrine to a lost friend. People stopped by the shop, but it was hard to talk, difficult to put feelings into words. In the evening the line at the funeral home threaded through the chapel, out the door, up the sidewalk and around the corner– all people biding farewell to a “simple” bicycle shop owner. The next day there were probably 600 people at th service at St.Augustine. There were 600 people there only because that was all the little church would hold with people standing at the back and in the aisles. His wife Katie and his children spoke. I just cried. As the service wound down I slowly regained control. It ain't over 'til the fat lady sings...and her last song was "Danny Boy".  A cappella. The tears started all over again. 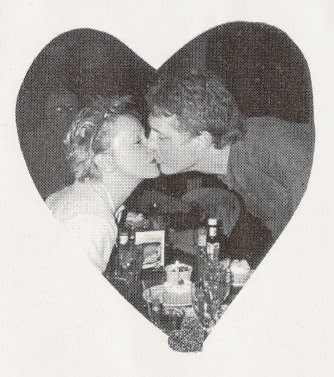 A wonderful tribute and accolade. We should all be so lucky to have people like this in our lives.

As fine a man as ever walked.