I went over to Dexter's house today - two old guys sitting around talking about bicycles and good people dead and alive; mostly dead unfortunately. The wheelset I was there to purchase turned out to be 27" rims, rather than the now standard 700's. At the asking price I bought them anyway without hesitation, if only for the Phil Wood hubs. 30 years later and the Phils are still as smooth as butter. 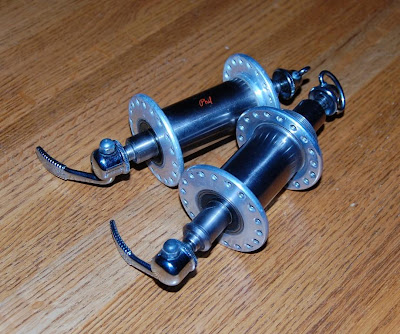 One of things I like about Phil Wood hubs, in this day of hype and advertising, there isn't big logos all over them, just a simple "Phil" in small letters. That, gentlemen, is class.

I recall reading that when the company was young, Phil Wood was in Europe, probably pushing his products. While touring the Cinelli factory, maker of some of the finest racing bicycles ever made, Cino Cinelli showed Phil his personal bike. It had Phil Wood hubs. Ne Plus Ultra.