When I was looking for a picture of a proper Morgan automobile I came across this. Since 1910 the Morgan Company has been owned and operated by the Morgan family. Okay, that's cool. But read on. In the September '08 race cited, the car was driven by a team which included Charles Morgan! Now what the hell, if you own the company, enjoy the ride! I love the way the British will say things like, "The cars are showing great pace...", when we know what they really mean is, "These suckers go like a bat of the hell...", a quality which Morgans always have had. 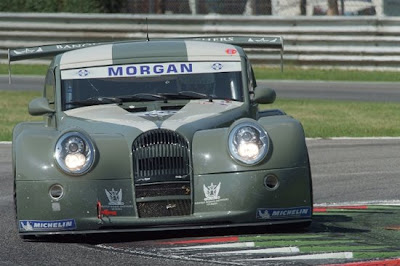 "Congratulations to the team at the FIA GT3 Championship at Brno coming in 5th and 21st in the second race, a fantastic result , with the lead car beating all Ferraris, Porsche, and Lamborghinis.
The cars are showing great pace and are now starting to worry the really well established teams. Charles Morgan shared a car with Frederic O’Neill, finishing well and really enjoying the race. The only driver racing with his name on the front of the car!! Well done to the drivers and the team.
The 3 car “AutoGT Racing” team, sponsored by Banque Baring Brothers Sturdza S.A., is run by the renowned F1 racers Jean Pierre Jabouille and legend Jacques Laffite.
Fitted with a dry sump 5.0 litre BMW V8, with some 420 Bhp, a Holinger 6 speed sequential gearbox, reworked suspension and racing brakes, carbon bodywork and revised aerodynamics the package is now proving highly competitive."

Looks like Charles Morgan needs to give his "wheels" a new paint job (gray is not a very exciting color). How about the colors of the Gunnario Berga's Mooney? I'll email my recommendation to him today.

Morgans + bikes! I am enjoying your blog. I have been owned by a 1958 Morgan 4/4 Series II since 1973 and by a 1987 Morgan Plus 8 since 1993. One of my Morgan buddies is building a bike for me from an Italian road frame of otherwise undetermined origin, Campy gear, Brooks B67, Honjo fenders, etc. Keep up with your good blog!