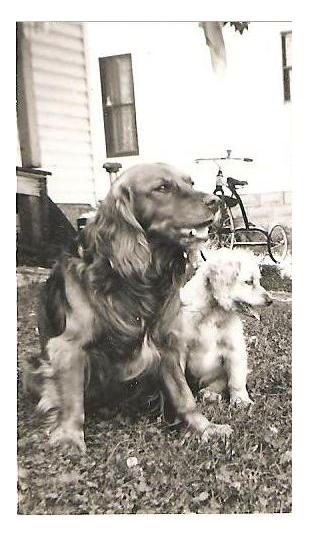 The dog's name on the papers was Berg's Buff Orpington - my Father's quirky sense of humor. The Buff Orpington is actually an old chicken breed of the same color. We just called him Buffer. He was a Field Bred Cocker Spaniel, the hunting dog Cockers were before breeders wrecked them by downsizing and citified them. They were the local breed of choice for pheasant hunting, all of the same line of sturdy brush busters, most the same color. 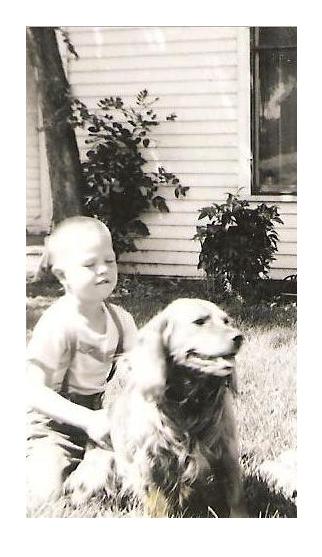 Now people buy "free range" chickens. In the small town 1950s, all the dogs were "free range". The only dogs that were chained or leashed were runners or biters. The dog adopted me as his sidekick. As long as I could remember he was a constant, by the bed when I woke up, with me everywhere I went all day, and up the stairs when I went to bed. When I started school he went with me, did his doggy things all day, and was back waiting for me by the door when I got out. I didn't think of him as a pet. He was more like an extension of myself.

That closeness occasionally got us in trouble. One time we were chasing Mrs. Andrew Hanson's miserable old cat. We came barrel-assing around the corner of her house, the cat running for it's life, the dog trying to end it, and poor little Gunnar just trying to keep up to watch the ensuing fight. The old lady opened the screen door for the cat and slammed it hard. Buffer never missed a stride. He went through the door like it wasn't even there. Hence fore, we were banished from that neighborhood. One more place we couldn't go.

The one that was the worst was the "peanut incident". Two things you should know. One, peanuts were sold in bulk from large burlap bags which sat on the oiled wood floor of the grocery store. Two, it was not unusual for my dog to follow me into the store. Yep, he marked those peanuts really well. Another place we were banished from for life. It seems like a lot of people swore at my dog.

Like most dogs, Buffer was a superb judge of character. He got along with just about everyone, except that old bastard, Alfred Johnson. Now Buffer was oversized for his breed, a substantial animal. Old Alfred was not allowed to pass. He had to cross the street to get by to get uptown and pick up his mail. This may have been a tactical error by Buff. Alfred had a reputation as a dog hater, a poisoner, and probably finished off Buff. At least I blamed him. We found Buff dead under Rhoda Jensen's back porch. My buddy Polecat and I buried him in the backyard. Polecat's father was the preacher, so we marked it with a cross made from a yardstick, assuming he was a Christian dog, and quite likely a Baptist.
Rest in Peace, Buff Orpington Berg.

Geez, Gunnar. Seems like you've been thrown out of all the classy joints...

I think I've spied a niche avocation for you -- breeding back the field Cockers of yesteryear. It's sadly too true; today's Cockers are basket cases.