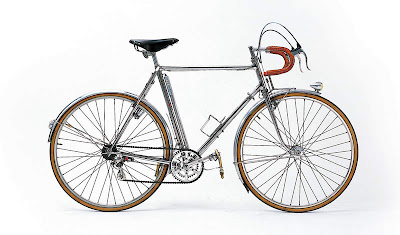 Anyone who has seen my bicycles will recognize the style of Ernest Csuka. All of the other great French constructeur companies are gone. Ernest was a nephew of Alex Singer. Now that he is gone, Alex Singer will probably be the last to fall. Originally all racing bicycles were single speed. If you ride a bicycle with multiple gears you owe something to these French constructeurs. 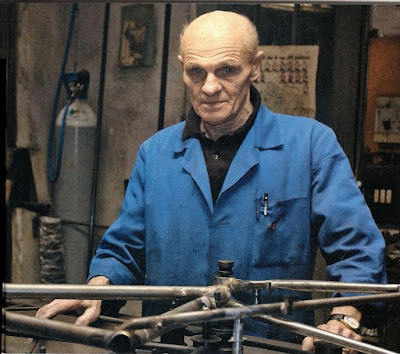 "Ernest Csuka, constructeur of Alex Singer bikes
for many decades, died on December 22, 2009. He
was 82 years old. Ernest Csuka was the last of a
generation of great constructeurs, whose work in
post-war France had shaped modern bicycles, with
lightweight tubing, modern geometries, and many
aluminum components which later found their way
to racing bikes. Many of the bikes Ernest Csuka
built have been ridden hard for decades, and
still are ridden today. They combine light weight
and a light feel with quality and durability."

Today it's commonly assumed that bicycle technology "trickles down" from racing. In fact, as you point out, much of what became de rigeur on racing bikes began with the bikes les constructeurs like Singer and Csuka built for randonneurs and cyclo-tourists.