This beat up frame hangs from a peg in my local bike shop. It was ridden by Andy Hampsten for the Levi team in 1985. 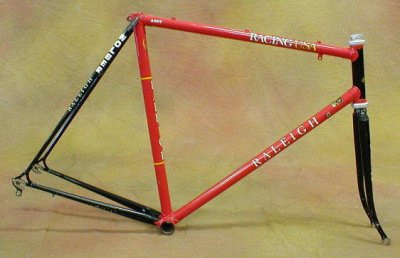 Three years later on Stage 20 of the Giro d'Italia, riding for the 7-Eleven Team, he launched a solo attack on the Passo Gavia in freezing rain and snow. His brakes froze. The dérailleurs iced up. Minimal braking, no shifting. He was overtaken at the end, but placing second launched him into the Giro lead and he became an Italian hero forever. Riding to school in the snow of Grand Forks, North Dakota served him well. He is still the only non-European to win the Giro d'Italia. Not even Mr. LeMond nor Mr. Armstrong. 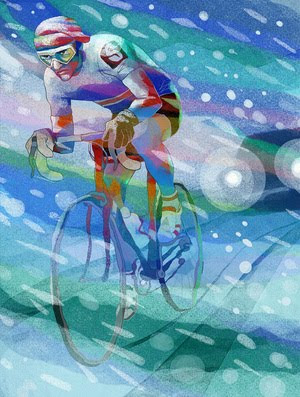 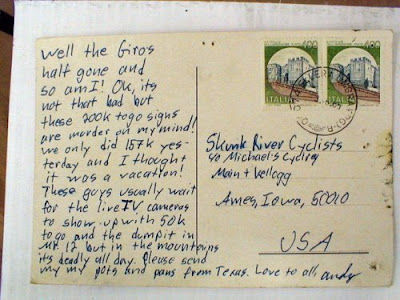 I like, "Please send my my pots and pans from Texas." He must have sensed he was going to make it over there.

Upon reflection, Hampsten's fortunate that he hails from this region's stoic Scandinavians. It's the only gene pool I know of that would encourage such behavior for so small a payday.

Research is warranted. If this type of conduct is attributable to something other than the old folks having gone mad after the wagons broke down, then that's scary.

Great Post.
Love the lack of commentary in the vid.

A funny story about that frame:

Dan was a little uncomfortable claiming it was Andy's frame without hearing it from him. So as he was thinking up ways of getting ahold of him I used Yahoo people search and looked for an Andy Hampsten in Boulder, CO. Sure enough, his number is listed and Dan gave him a ring. Andy was more than gracious and he and Dan talked for quite a while about the frame's details, component choices, races ridden on it, etc. That definitely added to my admiration of Andy Hampsten.

Andy seems like a good man. Unlike another former rider with Minnesota connections.

Hi, Gunnar. You might remember me from a year and a half ago when I sold you a pair of Mafac hoods for the Clubtail. I was pretty tickled to see the Hampsten postcard: I used to work at Michael's Cyclery in Ames, IA (not quite THAT long ago), and I remember seeing it there. Michael's is no longer, but two of the former employees run another shop there (Skunk River Cycles). They can't believe Michael let go of that postcard.

The flood! Aren't you the one that was in the process of being washed out? I hope everything is going well for you.

Yes, that's me! I'm doing fine, thanks. I wasn't washed out, but Iowa City is still recovering, as is Cedar Rapids, etc. I enjoy your blog. Happy holidays.