Most of our neighbors at the Alamo Inn were probably birders and as most of our daily outings were at birding hotpots we crossed paths with a number of other birders, some a number of times. The last week our neighbors in 202 were from England and coincidentally we met another Brit couple, Ian and Julie, at Willies BBQ and they came over to our Apartment 203 and helped us drink a nice cabernet on our last evening in Alamo. We showed them a couple of bird pictures on this blog. Julie was already familiar with 1410 Oakwood! She had caught us on a Google search of Texas birds and the Alamo Inn. A few months ago when the traffic here peaked at over 400 hits a day, I found it a little unnerving, but when I realize that most are probably sweet people like Julie, it's not so creepy.
There is a train that goes by, across the road from the Alamo Inn, three times a day. At the sound of the horn, both Brit couples rushed out in amazement to watch the train go by, counting the number of "wagons" as they passed. A big, loud, long diesel train! Something I never give a thought to, other than to piss about them as I wait at the crossing. What is ordinary in one place is exceptional in another.
Wherever the birders gathered there was a lot of discussions of where certain birds had been recently sighted, life lists, optics and cameras. Birdwatchers may be casual observers of birds, birders are not. They are intense, sometimes traveling all over the world to see more species of birds. I enjoy watching the birds behavior and I have no life list, other than in my head. Lorna keeps informal annual lists on the back of bank deposit slips.  You meet people and they are all excited by the Golden-crown Warbler sighted at Frontera, or the Rose-throated Becard at Estero Llano, and it's hard not to get caught up in the chase. For now our coin is balanced on it's edge, spinning and teetering from casual birdwatcher to serious birder. 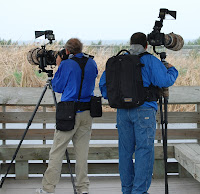 Okay, let's talk optics  - binoculars and spotting scopes. Some, ... no most, of the optical devices were amazing. Lorna and I both have discontinued or renamed binoculars - Lorna has a very nice set of Bausch & Lomb binoculars, made before before they spun off the binoculars to Bushnell, who chose to drop the higher end products. I have a set of Leupold Blue Ring Wind River Pinnacles, which I think are still made under another model name. I have also acquired an Alpen spotting scope and a carbon-fiber tripod - both light enough to lug. Among the passionate birders, these would all be considered very entry level. While some have Leica or Zeiss binoculars, the optics of choice are the high end Swarovskis, with an occasional nod to the Kowa spotting scopes. If push came to shove, I suppose we could afford these, but I refuse to buy a pair of binoculars that cost as much as a good used car. And the cameras? They are just silly mind-boggling.

From a guy who can't see across the street, I enjoyed the critics of the optics :-(
lcp