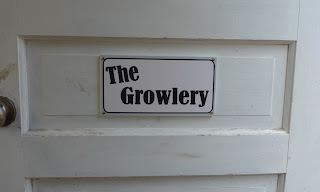 The sign on the door.  I don't like it. I bought it at a flea market in Donna, Texas. I told her what I wanted, "As plain as possible, with a basic font." I have no idea why "The" is crooked, but then again, I paid almost nothing for it. 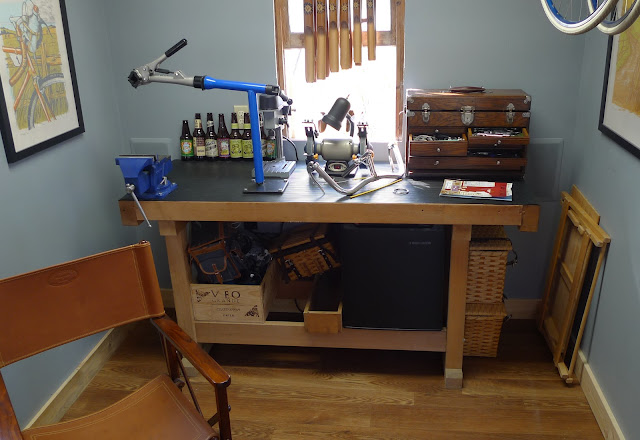 The bench started out as a woodworker's bench. I removed the two vises and slid it in place with the backside visible. The grinder and drill press are not anchored. The black top is a five dollar runner from Home Depot to cover the bench dog holes. That black hole under the the top is a beer frig. The bottles against the wall are the leftovers from an ale beer celebration last Friday afternoon. John Rust was there, but his sidekick, Odin, God of War couldn't make it. Lorna filled in admirably. Oh, check out the flooring, new since the previous photos. 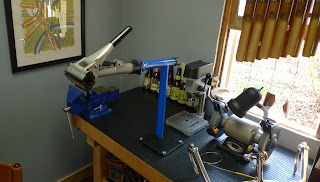 The bicycle clamp vise is a holdover from a design project for Target Corp bicycle racks. Park Tool sent me all their clamps as samples. Unfortunately, although my employer did get the contract, my eventual design did not include the Park clamps. On the upside, between the guys at Park and the Streater model shop I have a nice table mount bicycle vise that swivels out of the way when not in use. There is a solid steel rod insert with a little stop notch to lock the vise in the working position. So, to Dan Garceau, who was head of marketing and all the other great people at Park Tool, I owe you both for the clamps and for the nice retirement gifts you sent me. Whenever you're passing through, I'll try to pay you back in beer. 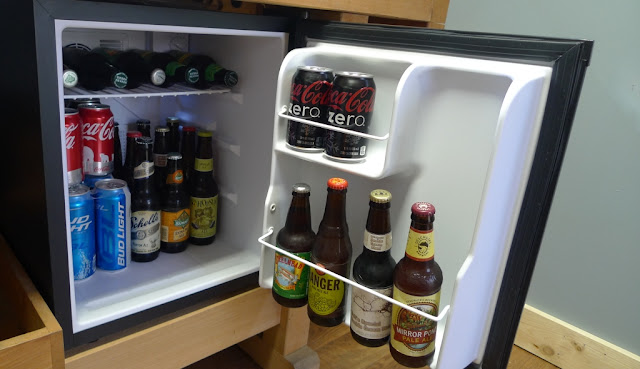 Now the really important part - the under-counter cheapo refrigerator filled with assorted very hoppy beer ... or Coca-Cola and Bud Lite for those who chose not to participate in the celebration.

Everything has its place, and everything in its place.

It is a beautiful space Gunnar, nicely don

I'll be there in July... McLean in hand.

Thanks to everyone for nice thoughts.

I received an email today from Rathke, admiring the bench. With extreme foresight, 20 years ago he donated the Growlery workbench when he moved to Detroit.

A big thank you to David.

are those bamboo chimes in the window? nice space

Yes, they're bamboo bonkers. A full 12 note scale. Wind marimbas. Because of space/function issues, I'm afraid they'll have to hang from the eave outside the window.