E.O.Wilson is Pissing People Off ... 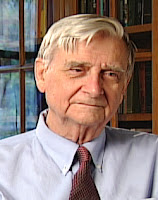 ... again. At my age it's hard to maintain heroes. They keep disappointing me. E.O. doesn't. Now he is pushing a theory he calls Group Selection. I've been reading Wilson for years as he has gone against the mainstream scientific community. Ultimately he tends to be right, and he takes joy in the intellectual battle.

"The alternative theory holds that the origins of altruism and teamwork have nothing to do with kinship or the degree of relatedness between individuals. The key, Wilson said, is the group: Under certain circumstances, groups of cooperators can out-compete groups of non-cooperators, thereby ensuring that their genes — including the ones that predispose them to cooperation — are handed down to future generations. This so-called group selection, Wilson insists, is what forms the evolutionary basis for a variety of advanced social behaviors linked to altruism, teamwork, and tribalism — a position that other scientists have taken over the years, but which historically has been considered, in Wilson’s own word, “heresy.”

"On a recent Monday afternoon, the distinguished Harvard biologist Edward O. Wilson was at his home in Lexington, talking on the phone about the knocks he’s been taking lately from the scientific community, and paraphrasing Arthur Schopenhauer to explain his current standing in his field. “All new ideas go through three phases,” Wilson said, with some happy mischief in his voice.“They’re first ridiculed or ignored. Then they meet outrage. Then they are said to have been obvious all along.”

Wilson is 81, an age at which he could be forgiven for retreating to a farm and lending his name to the occasional popular book about science. Over the past year he’s tried his hand at fiction writing, publishing a novel about ants — his scientific specialty — and landing a short story in The New Yorker. But he has also been pressing a disruptive scientific idea, one he reckons is currently in phase two of the Schopenhauer progression: outrage." more

I'm not much of a student of Sociobiology, but I think that group selection makes more sense than kin selection.

In my personal opinion, altruism is best explained by the prisoner's dilemma. http://en.wikipedia.org/wiki/Prisoner%27s_dilemma

Namely, that if two competing people (or groups) are subject to multiple interactions, over time they will learn to cooperate out of self interest.

Of course, then there is that whole spiritual / religious argument about being made in the image and likeness of God, which may be true but I won't find out until after I'm dead. Using the prisoner's dilemma again, it's probably best that I go along with it just in case.

I have chosen another road.

E.O. Wilson is one of my favorite scientists. He's right on!