The following, a reaction to an earlier post, is from Michael White. This is definitely a classier frame than mine, but the thought is generally the same. In fact I already have the Jitensha flat bar just waiting for a vintage Shimano trigger shifter to show up in the mail. Nice cafe racer, Michael, a real wolf in lamb's clothing. 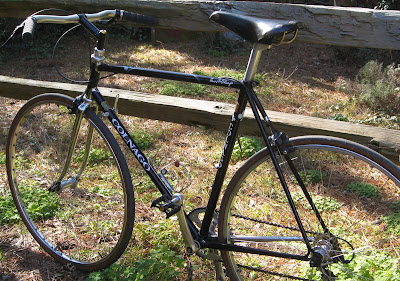 About a decade ago, I spotted this Colnago frame hanging, NOS, in the front window of a Florence shop (Cicli Conti). On an impulse, I brought it home on my shoulder. I built it with expensive Super Record parts, many of them pantographed, which I found (mostly NOS) on Ebay over the next six months. It was intended to be a Sunday bike, something that would take me back to my roots, etc. It did what I asked it to. People noticed. I polished it. Gradually, though, I found that I took it out less and less. My modern road bikes got and still get most of the miles. One day, I realized that a year had passed since I’d last ridden the Colnago. This made me feel a little queasy . . . a betrayal of sorts.
So I rebuilt the bike in the style of so many older steel bikes I’d seen in the cities of Europe. I took off the expensive Campy parts, and put on cheap stuff from my parts boxes. The only noteworthy components now are the Jitensha bar, which I really like; the Bullseye hubs; and the single Simplex retrofriction lever. The bike is completely transformed. In the past two years, this bike has become my steady commuting bike, my go-to bike for almost every shorter ride. (It’s still fine for longer training rides, too.) Usually it has a VO saddlebag and lights attached. I’m a professor, and find that though I love bags and racks, I actually don’t need to carry much to and from school. Also, I live in a temperate climate, which helps, though I sometimes use clip-on fenders.
If you haven’t ridden a Colnago, they have very stable handling, which works nicely in this configuration. A lugged bike like this is reasonably light for a road bike, of course, but it seems super light and snappy and fun and elegant as a café racer/commuter. Also, this bike sees every version of me, in everything from lycra to gym shorts to hiking pants to dress slacks. It has versatility, speed, and style in spades, and it never fails to delight.
William James had a school of philosophy termed “pragmatism,” whose basic premise is to try to understand what works for people. Not what they want, not what they say, not what they think or desire, but what actually works in practice. This bike isn’t what I wanted, not what I set out to build, but it is the bike I grab about 90% of the time when I need a bike to get down the road.
Michael White

Rad. The way a bike should be: used.

All it needs is Cantilever brakes!