First of all, who is Dave Moulton? The following is pretty much the Wiki entry. I rewrote it a little and edited it down to a manageable bite. 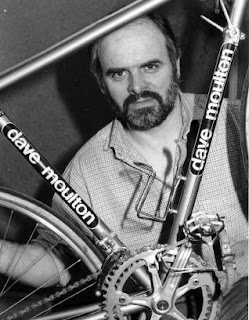 Edward David Moulton, born 1936, studied at Luton Technical College in England and beginning in 1957 learned bicycle frame building from Albert "Pop" Hodges in Luton. He opened a frame-building business around 1975 in Worcester, England. In 1976, Paul Carbutt rode one of Moulton's bicycles in the Olympics in Montreal, Canada. The bike frames were marked with Moulton's name, "Dave Moulton" in large lower-case letters. He emigrated to the United States in 1979 to work for Vic and Mike Fraysse in Ridgefield Park, New Jersey, building bicycles under the Paris Sport brand that was used by the U.S. Olympic Cycling Team. In 1980 he went to work for Masi in California. In 1981 he rented space from Masi to start his own frame-building business. By 1983 he was doing well enough to move his business to a stand-alone location in San Marcos, California. That year he went into partnership with Olympic cyclist John Howard and manufactured bicycle frames under the John Howard name. In 1984 he began making frames under the Fuso label, Fuso being the Italian word for Molten, and between 1985 and 1987 made a small number of frames under the Recherché label. Moulton's bicycles have been ridden in more than 20 world championships, in major races including the Tour de France, and in Olympic events. He now lives in Charleston, South Carolina.

A few months ago Jack Gabus (aka Silk Hope) thought he had purchased an older Moulton. The deal inexplicably exploded, leaving Jack extremely angry and moultonless. Then the bike gods smiled. Karma? A gentlemen in England had a Moulton for sale, a very early example. Jack bought it for, what was in my opinion, a song. 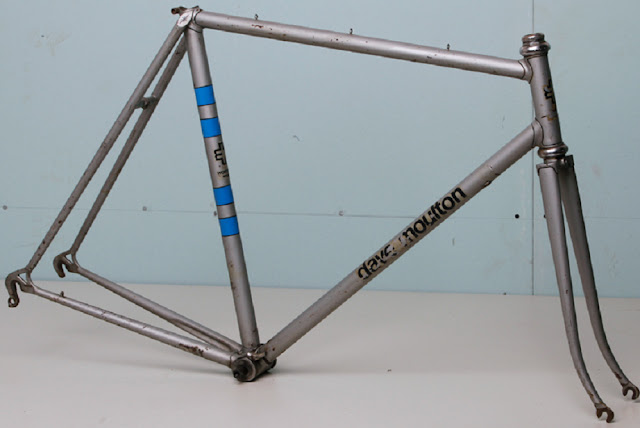 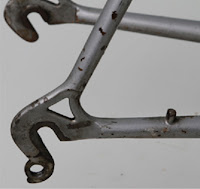 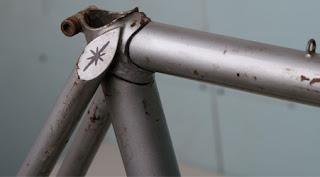 This is an old bike. Should it be restored or left alone. If you restore, where do you get transfers?  Go to the hassle of scanning off the bike and having someone make them? No.  Dave Moulton is still alive and well, and he is going to have some transfers made. With his obvious blessing, it'll be restored. Jack is thinking having it painted cream with dark blue lettering panels.

@Jack, If this is a 1975, why are you considering the panel transfers which seem to show up two or three years later?

Ah, the age old question: to restore authentically or to preserve whatever is left of originality? My answer would hinge on how realistic it would be to have an attractive, functional bike if one attempted to preserve what's left of the original finish. From my prospective, "grey porridge" isn't all that interesting. A nick here and there can be touched up but once a machine gets passed a certain point, refinishing is the only way to go, especially if the bike in question has no specific connection with an important race, rider or other historical benchmark. Additionally, since this is a bare frame and none of the components will be original, preserving the remaining paint and decals seems less compelling. If it was my bike, I'd get her stripped and repainted and ride her like I stole her. I'm certain that's the outcome Dave would hope for.

That's the approach I take to my race boats, and some of my boats are past National Champions, some are older than I am and one competed in the Olympics. I don't abuse them but neither do I agonize about using them in anger--in the manner in which they were built. The world, in my opinion, has enough wall hangers.

And some are on my walls. I still really haven't taken the Galmozzi out except to check brake and derailleur function.

not only does it deserve to be restored, and ridden, a bike like this requires a very special ride. I say Jack flies to Montreal and rides the route of the 1967 Olympic Road Race.

@Gunnar: Because Dave said he liked them better. That was good enough for me. But final decisions has not been made until the frame arrives from jolly ol' England. I want to see what shape she is in. @Tom you can join me and we'll drink the champagne on the last lap. His first comment was "It is a damn museum piece leave it as is but get the frame checked to make sure it doesn't fall apart".

One nice thing about repairs on a Moulton. His trusty apprentice still makes frames under the Fuso name(Russ Denny)here in So Cali.

@George: My other passion is Porsches. Dad and I use to pull them apart and make them brand new. I still have one (silver 69' 911 E coupe)I now have a few rock dings but I drive the hell out it. In fact I broke the rear end loose yesterday and almost lost it on the 133. Damn that was fun!

I agree with what George and Tom have said.

This makes me think of productions of Shakespeare plays in which the directors, designers and cast tried to make everything as "historically authentic" as possible. They're usually boring, quite frankly. Classics--whether of literature or cycling--are like living, breathing organisms, not dessicated artifacts. Let them live in the present!

'Pends on the build. I have done both.
One, you can build in the spirit, but make it more ridable.
Or two, it's really fun to try to get it as close to original as possible. But then of course after you're all done, it could turn out to be five years older than you thought, like my Galmozzi was. ;-)

Either way. the process is fun.

In light of the history, and ESPECIALLY because Jack is Porsche drifting, there must be NO BLUE anywhere on the bike. Or near it. Walls and/or clothing which are blue and in proximity must be repainted a non-blue shade.

Christsake. At least we finally have an opinion. Good man.

Jack, I'd paint it to match the original color and do original decals. It'd be very retro-cool.

Can we have another one. As usuall the rev has definite feelings. Oh yes Rev I hope the shoulder is stitching itself back together.

@Gunnar: The cream would be somewhere in the neighborhood of the Pinot express. (non fat).

I'm going to be the contrarian here. Dave Moulton did not just build the bike, he also painted it. Why go through the trouble of tracking down an early Moulton, then alter it? I have a couple of old frames that started out looking just like this one, but with the use of some good quality automotive paint restoring compounds I have been able to get the frames looking pretty nice. A good coating of very high quality wax and the frames are ready to ride. I might replace the decals if they were available, but even then I'm not so sure. Having said that, as far as components go, either original 1976 Super Record, or 2012 Super Record 11 works for me! If it were mine, it would be ridden and ridden often!

@Tony, Point well taken. I lost that one a few days before I posted the piece. Ultimately, Jack's bike, Jack's choice.

@Tony: When I first get a relic like this I give it a through cleaning and than good wax job. I am sure I can get the decals from Dave. So we'll see what she look like after that. As for components it will be some sort of 1st gen Super Record a la Paul Carbutt's bike. Definitively not going the modern route. I will add bottle bosses to the down tube if the bike is redone.

And why not clamps?

I hate them. It is one of those little original things I can do without.

Whatever you choose to do, this is one nice bicycle! (Did you get it from Hillary Stone?)

Silk: No matter which course you take, please share a few pix of the finished result! Have you contacted Dave M. with the frame Nr so he can add her to his list of survivors?