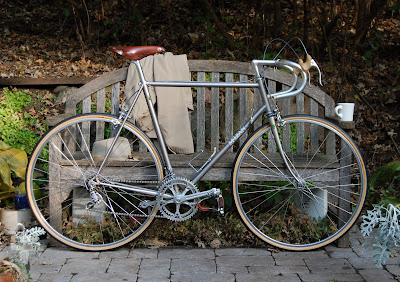 I took 5030 around the block. It was a bit of a trick as there are no cables attached,i.e. one gear, no brakes. Since the last ree-port I got the old Modolo brake levers back from their vacation in California and reunited in marriage with their Modolo Pro calipers. Thanks a bunch, Jon. I also installed the period REG bottle cage (per Allan Pollock's suggestion) and the Cinelli toe straps (pretty, pretty). I wrapped the Campy toe clips in leather because they were scraped up and it was cheaper than buying new ones. Eventually I'd like to find Cinelli clips. I have some, but they're all beat to hell. After this thing is built-up neat I'll take a set of pictures, then ride it hard without worrying too much about it. It's not a weapon that should be sheathed. The bars will shortly be wrapped with dark blue Tressostar fabric tape. I considered stitched leather covers, but it wouldn't be typical for the period. In general, I really like the angles of this bike and it's quite light for a 60cm steel frame. The photo is nicely detailed if you want a closer look.

The leather toe clip covers may not be period-correct, but they are a nice touch and go well with the Cinelli toe straps.

The blue Tressostar would look nice, as would blue cable housings. And, of course, if you could find a blue Silca pump, or have one painted in that color, that would be nice, too.

Anyway, it's exciting to see the bike "evolve."

I have a yellow Silca that will be painted to match the frame. I would prefer a chrome pump (more correct), but it's surprisingly difficult to find the right size that will accept the Campy pumphead. I considered blue cable housing, but it's difficut to locate dark blue housing that will handle the old, heavier cables I'm using. I can't live with Jagwire on this one.