Today  I took the McLean over to Lanesboro for some riding on paved trails.  The village is picturesque and the trail is mostly wooded, on an old rail bed which follows the Root River. I forgot the camera again. Remembered the bike though. 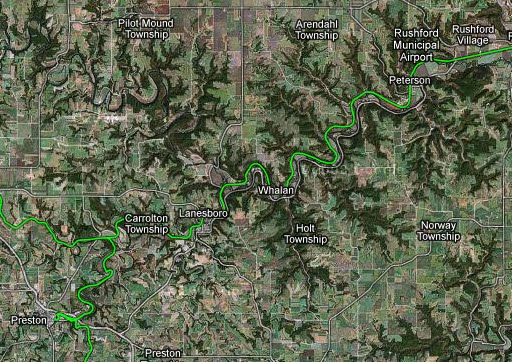 I went a few miles west toward Fountain and Preston, mostly because I enjoy riding through the cuts - deep, narrow gorges chiseled  through sold rock. They are a little like open topped tunnels. It's hard to imagine they were wide enough for a train, at least a modern train. After this short detour I went back to town and had a brat and root beer at the Wursthaus. Arv is still there and he played a couple of polkas on the accordion for me. Badly. With this new fuel on board I mounted up and headed east toward Whalan, only about five miles. I stopped for water in the park at Whalan and talked to a group from Des Moines who had decided to fore go RAGBRAI this year for the Root River trail. ??? Age maybe? I continued on to Peterson where I rested a little, watching kids playing baseball, then headed back toward Lanesboro. The weather was perfect, moderate temperatures and humidity with minimal wind and I was rolling pretty good - good for my revised expectations.
A few miles outside of Whalan I was ambushed by a couple of young men in baggy shorts on mountain bikes. They had smooth tires, seats up, bars low, but they were definitely mountain bikes. It's bad enough getting passed by young punks, but sitting astride a McLean and having mountain bikes blow by is hard to swallow.  I sucked it up and closed in within striking distance. They ignored me. I decided my finish line was the bike rack at World Famous Pies in Whalan. They didn't even know they were in a serious race. As we got within sight of the pies, they were still unaware. I wound her up and blew by them. Well, almost by them. Just as I got even with the lead rider, he glanced over, stood up and gave me a taste of Cavendish and was gone. They knew. Peach pie with just a little ice cream and coffee helped sooth me.
Coming out of Whalan I spotted a familiar old boy ahead of me. He was sitting astride an old Bianchi, toe straps and all. We exchanged words and I followed him for the five miles into Lanesboro. When I thought it was my turn to pull, he immediately passed me. Hell, he was 70. I let him have the sprint. His name is Bill Morman, a retired IBM engineer from Rochester, who owns the ice cream shop in Lanesboro. We sat on a bench and talked, trying to figure out how we know each other. After half an hour, probably longer, he had to get back to his ice cream and I just had to go. Nothing epic happened. Actually that pie was pretty epic.

Bitter medicine is good for the soul.

I love it! The ride is "epic" in the sense that it was a sort of passage: from being passed by the young punks to meeting a sort of kindred spirit (at least in terms of cycling and general life experience).

I was going to caution you about this kind of conduct at our age, but having had to be talked down in my besotted, rodeo-going, younger days from entering an amateur bull riding event, I figure who am I to give counsel? I really enjoyed your Cavendish reference.

My cousin Gene just finished todays route (RAGBRAI) out of Clear Lake in a 50 mile down pour I am assuming it was dry in Minn. Wish I was there so that a Squadron of McLean's (us) could of kicked but on the MTB boys. No disrepect to you Rev. Dick.

Why is Pie so great in the Midwest. Especially if it is made by Menonite women.

Having come from pie making stock and having eaten a lot of great pies, I have some thoughts. A lot of good fresh fruit with only enough filler (sugar, flour, cornstarch) to hold it together, don't make it too sweet (more isn't necessarily better. Crust is not just a container for the fruit. It should be made with lard and minimally worked (think flavor and flaky).

It has been my experience that some Mennonites and Amish make an acceptable pie, some not. I'll take a Danish grandmother every time.

Oh I can see next years RAGBRAI is going to be a real kick in the head.

Not until next Feb. Tightly held secret like Coca Cola.