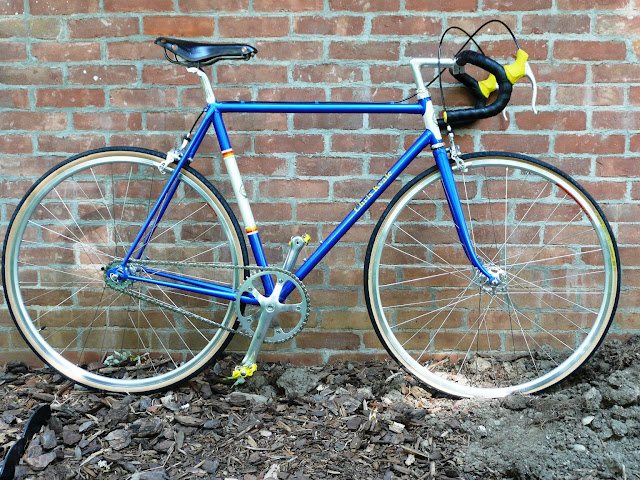 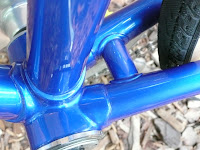 I believe I bought the Jon Guinea Kvale from Tom Sanders. Regardless, this is Tom's newly refinished 1977 Kvale fixed gear with paint done by Doug Fattic. 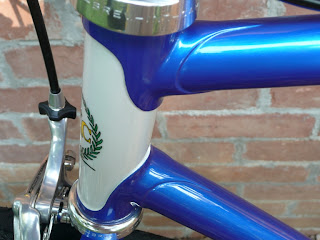 Below is Sanders's town bike, which started out as an early Tom Richie cyclocross show bike which was later adapted to the rider's maturing needs. He said originally it was a 19 pound bike even with the big tires! Tom Ritchie serial #19. 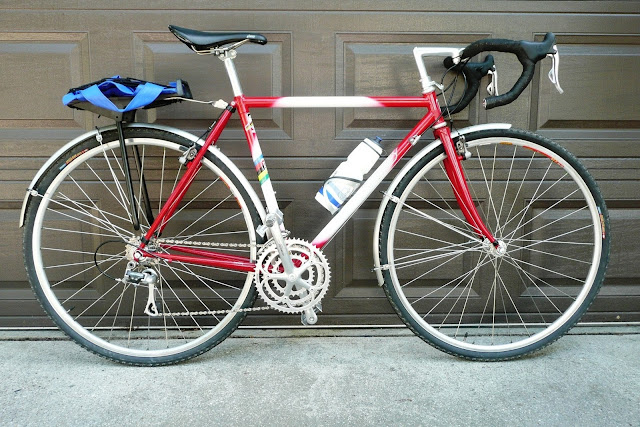 Tom always has an interesting "twist" on his builds. As in yellow pedals etc.

I also noticed the paint. It smooth and beautifully applied, but Chris lays it on thinner and masks the color transition on the inside edge of the lug rather than outside. Neither wrong nor right, but it's almost like fingerprints.

The "interesting" twist is like sticking a pink flamingo in the middle of a beautifully laid out perennial border. Just to keep it from being tooooo refined.(Lorna won't let me.)

OOHh Flamingos! Miami in the middle of Albert Lea. Any other exotic tid bits?

My parents lived on a large rural lake(here in Minnesota). One year at Christmas I found some very cool pink Flamingo wrapping paper. I managed to find a couple of plastic flamingos and wrapped them unboxed for my mother. One of those, "I wonder what this could be?" gifts. Ma said, "Oh, decoys!" To which the Old Man replied, "There ain't no flamingos around here!" She never missed a beat, "That's because we've never had decoys before."

I really need to get a pair of flamingo decoys.

What I'd REALLY like is a flying flamingo whirligig weather vane(the wings spin). Only with human female legs in nets and spike heels (ala Christmas Story). And maybe butterfly sunglasses and a cigarette in a long holder. We can only dream.

Sound like you need to do a sketch, then post on 1410 and we vote on the design qualities of your new weather vane.

This thread has certainly taken a bizarre twist.

I wish Ritchey still made regular bikes like that. Really they were good value.

the Kvale is sweet.

Nice bike(s)!
BTW, we get real flamingos every so often here.
http://mimbresman.blogspot.com/2008/12/merry-christmas.html

Gunnar, if you really want the vampish flamingo decoy you describe, I'll bet our buddy Gabriel could make you one! Ray Etherton, noted British man of great humor , who used to own Bates Cycles (and may own it again?) famously rode with a Parrot decoy on his head for many years. Maybe we each should have a decoy familiar to accompany us.

Great! Of course I'd have to get a divorce.