Galmozzi and the 47 Pound Rooster 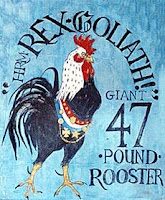 Let's get the 47 Pound Rooster out of the way first. Rex Goliath was a famous carnival sideshow attraction that the Hahn (means rooster) wine company decided to put on the bottle of their popularly priced Pinot Noir - an adequate wine for the money. This has nothing to do with the rest of the entry, other than I was struck by the similarity to the Galmozzi Bicycle logo.

According to Chuck Schmidt,  the famous head badge is actually a play on the maker's name in the form of a rebus: gallo=rooster, mozzi=hub.
Francesco Galmozzi began building bicycles in Milano, Italy in about 1935 (!). The Galmozzi frames are very respected, beautiful as well as fast. They are usually more ornate than typical Italian frames, which lean toward function. Great bikes!
I have never met Rory Mason, a.k.a. Masini in person. We became acquainted because we were both friends of the late Dan Ulwelling, who is responsible for getting us both get interested in vintage lightweight bicycles. Rory has some advantage over me in finding old Italian bikes, as his job with Cannondale and Team Liquigas has him living on the Swiss/Italian border. This has allowed him connections in the bicycle racing world and access to a few more frames than I have stumbled upon here in rural Minnesota. This is what he says: 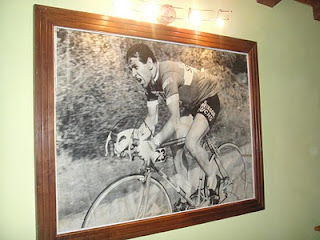 "So I'm finally a Galmozzi owner! I went to Florence last week and stopped by a friend's place. He's Gastone Nencini's son and has quite a collection in Prato. Many of you may have purchased from him on eBay. A quick trade and it was mine! It's the first I've seen 'in the flesh'... my size, and it's now mine!" 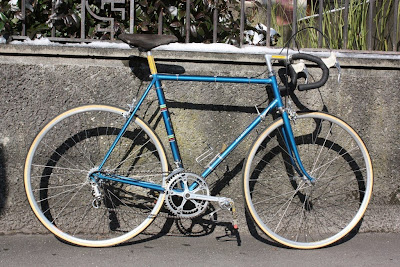 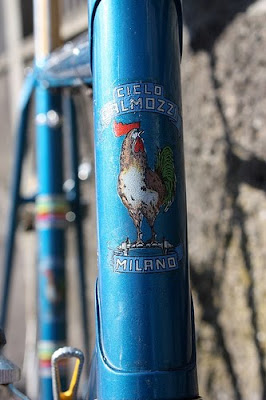 After an exchange between a couple of people who know way more than I do, it is their opinion that this is a late 60s, maybe early 70s bike. This is a real classic Italian racing bike. There simply isn't a better one to trade up to. This is the Holy Grail. There is a nice story and a link to more photos on his blog, Masini's Breaking Away.
Just a quick note on Gastone Nencini. He was a chain smoker who won both the Giro d'Italia and the Tour de France.  A chain smoker?  Boggles the mind to think what he might have done without the fags.

Thanks for the repost! Oh, I sampled a 47 Pound Cabernet while still in the States last weekend... not bad. Unfortunately, the wine-label soaking secrets lie with my wife who was at home!

I have an empty 47 Pound bottle on top of the cupboard between a '02 Old Fart and a '93 Opus One (all 60th Birthday wines). I'll try to soak the label and send it to you.