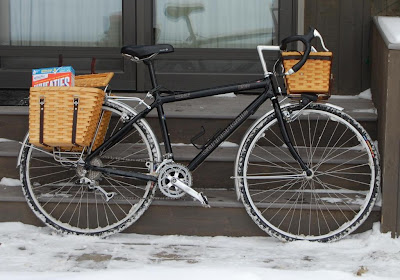 I don't know if Albert Lea was typical, I suspect it was. Fifty years ago there were small grocery stores within walking distance of most housewives. In the older neighborhoods that put stores about eight blocks apart. Obviously that model no longer makes sense, but somehow in the back of my mind I can't shake the feeling that depleting energy sources are going to change the rules again. Maybe fifty years from now a typical office worker will work most days at home. And once a week or so they'll bicycle into the office, or maybe to a nearby grocery store now and then. Right now, I wish the grocery store was closer.
The last couple of blocks to my house is not bicycle friendly right now. I was kind of whining to myself as I walked the bike up the hill. Halfway up I met George Saunders shuffling down the ice rutted lane with his cane (we don't have sidewalks). Now, George is in his 80s with severe tremors and a cane even on good surfaces. I said, "Damn, George, isn't it kind of tough for you walking on these streets?" "Yeah, but I got these," his voice wavering like an old Hepburn, and he showed me the little studs on the bottom of his boots and stick. We talked for a while. By then I had forgotten about how unfair the world was treating me. I wheeled my grocery wagon on home, put things away, and had a poppyseed kolache and a cup of coffee. Life is truly good.
Chad, Just as I pulled up I shifted unto the big gear just for you and the photo op. ;-)

You live in Minnesota... you have hills? Where?

Ha, just about to say something as I read that last line. "There's that gear again..."

That model still applies here...somewhat. I still prefer to use the neighborhood Chinese grocers here in Venezuela. Sometimes I walk, sometimes I ride my bike. Either way, I take my messenger bag. It makes for a easier walk or ride back.