Last night I received an email from Kurt, in which he accused me of being a "sophisticated Minnesota raconteur". I was a little offended. I checked the dictionary. Up 'til then I thought it had something to do with running a restaurant. He implied I hadn't posted one of his paintings because, "It does not quite fit your current image as a sophisticated Minnesota raconteur." Well, ja. As he puts it, this is a "fun painting". I don't know where the idea came from originally. I believe the only street accordion player I've ever seen was when we visited Kurt in Boulder. Gave the guy 5 bucks. That may have triggered this - I'm not clear of the timing. This obviously should have been posted with my earlier Squeeze Box Throw Down post. 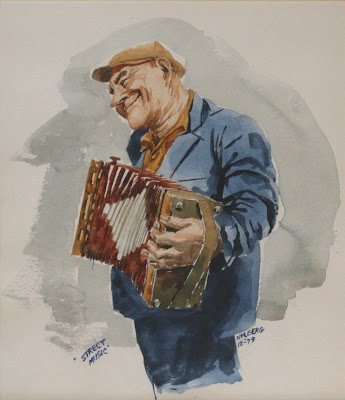 (I should have put aside my pride in working without a net and sketched the hand in pencil first. It is a little awkward, you might even say ... heavy-handed.)

the awkwardness is a good thing.
the roughhewn hands of Michelangelo, Rembrandt, even Vermeer . . . so much of the soul is there.

I sort of agree with your friend who told you to shut up and paint. It's a gift, be humble and use it.

Of course you're right. Just do it. We need more lifetimes. A lifetime to be a poet, one to paint, another to dance. And a couple to play with bikes.

The hands are not just roughhewn. It is poorly executed.

Another whiff of painter's procrastination?

If we need several lives to get things right, then awkwardness is like adolescence: We have to go through it to gain wisdom and refinement.

We really have no choice but to "Just do it." No aplogies to Nike!

Dad please start painting!! I challenge you to do one painting a week. I'll do it if you do.
I spent about three hours last week doing a pencil sketch based on your Chief Joseph. I am so amazed at your ability to create space and depth within that piece. And "street Music" is so expressive. I love it. I need some more inspiration from my amazing...(though admittedly rusty) artistic father. You have been procrastinating picking up painting again my whole life. So stop pulling an Addy "pokey-hontas" and do it. Thank you!! love you, miss you!