This is only a partial report. I learned so much I haven't been able to process it all yet. 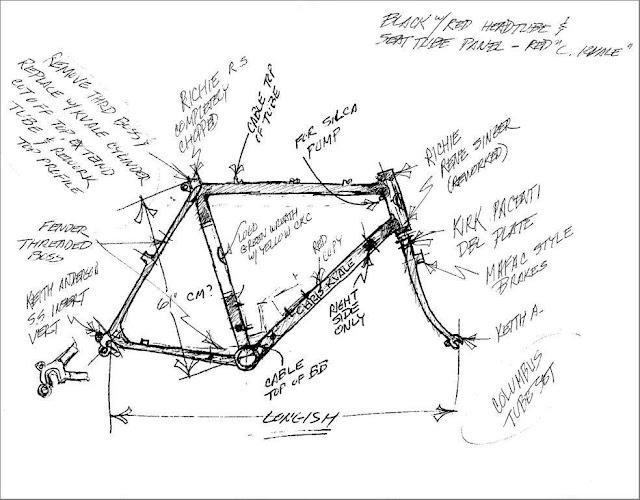 I arrived at Chris Kvale Cycles early Thursday afternoon, with my McLean bicycle, a t-shirt for Chris from Jon Guinea (Chris says thanks), and a folded 8 1/2 x 11" piece of paper. I tend to forget things and the paper was a record of my thoughts for a bicycle - a sketch on one side and scribbled notes on the back. We talked for quite awhile, a little about bicycles, more about the Michigan U.P., his family, but mostly about his knees. He has worn them out with a lifetime of riding and he had another appointment in the morning with specialists discussing his options. They are not good. The surgeon can replace or repair his knees, with bone or man-made materials, and give him good mobility for walking or even casual riding. Unfortunately they really can't give him the range of motion he requires to ride a bicycle as hard as he does. He has more hope after he talking to a cartilage specialist.
I partially disassembled my McLean and Chris clamped it to a flat table and we spent quite a lot of time measuring it as a baseline for a new frame. I felt I wanted a slightly larger frame. He was hesitant because he felt the McLean "looked right" with the present seat and bar setup, and when bikes look right they usually are. The McLean is 59.5 cm center of BB to top of top tube. The two things he is most concerned with on his bikes is the bottom bracket height and the fork rake and offset - trail - far too complicated to discuss here. He maintains that straightness and very small tweaks of these, more than anything, determine how sweet a bike will ride. Eventually he decided he wanted to drop the  BB .5 cm and would add 1.5 cm to the tube length which will give me 2 cm less seat tube showing. He was also suspicious that the fork trail was a few millimeters too long. As he said, because the total distance is so small, a few millimeters is a large percentage and can really jack things around.
He said we had had enough shop theater and it was time for some road theater. We went out for a ride to critique my riding position. Two blocks from his shop we turned left on the Greenway bike path and took it east to a right on the West River Road  bike path. He continually asked questions and critiqued the hell out of me. Basically, I look pretty comfortable, ride pretty well for a big fat ol' boy, I'm a masher and my left knee kicks out with every stroke (a skiing 'mishap'). We switched bikes for a while and then returned after about 5 miles of riding, just enough to get me sweating pretty good.
Back at the shop he measured me, -  height, weight, wingspan, inseam, foot size, verified both legs are the same length, because my left shoulder is lower than the right. An interesting aside, I am 6' 3/4". I have lost over 2" of height since I was young, which means I'm even more overweight than I thought I was. I left fatter than when I arrived. Chris had a medical phone call so I slipped down the hall to Peacock Groove, where Eric Noren regaled me with his tales. He's really cranked up, loud talking a mile a minute, turning the music up, turning it down, back up again, jumping from bike to bike pointing out features. With his tattoos and big personality, he's the antithesis of Chris, but Chris assures me he's a great guy. Eric builds nice bikes, more in the hipster fashion, but he has a suck website.  He showed me a little 12 pound steel fixed gear bike he built. Take that you carbon sons a bitches! Ha! Of course everything hanging on it is carbon. 12 pounds- not the frame, the whole damned bike! 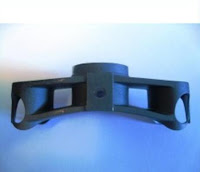 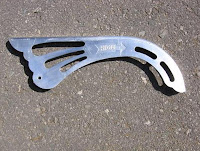 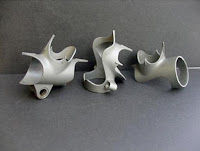 Old French chainguard. It just needs a little TLC and it will look new. The lug set is the Richard Sachs Rene Singer set. The double plate fork crown is a new one from Kirk Pacenti - very traditional.The lugs are just a starting point. For instance on the seat lug, he cuts the top off and welds on his own thin extension and then cuts new flared points from it. He cuts off the threaded clamp extension on the back and welds on his own simple threaded cylinder.  I asked him why he does it?  "Just because I think it looks better."  And, it does. 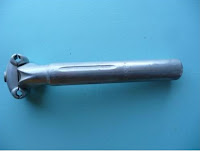 New dropouts from Keith Anderson with stainless inserts. Mine would be similar except are vertical. Chris is pretty excited about these. They free him from nickel plating the dropouts, and mostly, because they're just better.

If you put something from Keith Anderson on that Frame I will never speak or blog to you ever again. That is bad "Ju JU".

All input is valued and will be weighed and taken for what it's worth.

Your being Politically Correct.

My favorite part is the wheelbase measurement on the diagram.
mw

mw,
Well, who the hell am I to tell Chris Kvale what it should be? So I hinted. Turned completely loose, every bike he builds would be a 1980s racing bike - nice, but not the only bike in the world. God, he hates sloped top tubes.

Check out this top tube: I guess who ever raced this had it built that way or Alberto was not paying any attention. It is off by a full inch.

That one is strange, not sloped, but not right either.

Rides as smooth as silk. It makes my Masi Carlsbad seem like a total clunker. I mean night and day.

Mim,
"eventually". Which is more than could be said of vintage Campy sidepulls.

That's going to be a sweet ride. Why only one shift braze-on? Did I miss something? Going 1x10? I do like the asymmetry of that. Nice touch.

Barin,
Note the first small picture. I'm 65 years old. This is the bike to take me to the end. I thought about how I really ride and it's running around town wearing sandals or tennis shoes, often wearing khakis. This is going to be a town bike. A quick town bike with 700c x 38s, drops and guidonnet brake levers, but only because I just can't get use to flat bars. 1 x 10? 1 x 7.

By the way, just sayin, but I think the dropouts, lug choices, fork crown are all inspired classy yet functional choices, and I mean that. I once bought a Bridgestone solely, and I mean solely, for the Ritchey biplane fork crown, and that was stupid but I had to do it.

From one bike lover to another, I love the overall plan.

The chainguard is a nice detail. I just put a modern "Paul's" version on the Merlin since it is a 1x9 now.
Anyway, I had to choose a number for my 1x? question. I chose 10 because I guess its the standard? but now I guess it is 11. I've lost track of certain bike technology living down here. I should have known it would be 1x7. My road bike (the RB-2) is still a 7-speed (with downtube shifters). I agree with MW, it is going to be a sweet bike.

Barin,
On the Mafacs, I have put my money on a set of NOS Suntour XC Pro cantis.

You're going for an end-of-life bike and aren't considering Paul's® Racers? Embarrassing.

My new ride, a Surly Pacer, is significantly smaller (54cm v. 57.5cm) than the frame I just sold. I, too, am shorter than 25 years ago. Interestingly my "ape index" remains in the negative.

Sorry to hear about Chris's knees. But replacements are not the end of cycling, if he's not too proud to use short cranks. But there are no Campi cranks that can be shortened so he just might be. I've got a 6'2" customer with range of motion problems who competes in Brevets on 95mm cranks. Most knee replacements get by fine with 153s.

I used brazed pivot Mafacs or Weinanns on my early frames. Soooo much classier looking than those gawdawful looking Pauls. And unlike when used with the standard yokes, they're all the brakes anyone needs.

Jane's running 1x9 now on her mixte and loves it. Tiny chainring looks silly but she's a good spinner with her 148mm cranks and coasts down big hills.

You ain't gettin' any taller, so if anything go smaller on the frame size.

Mark,
Chris is Chris. He may come around, but it'll have to be his idea. Maybe I can push him in the your direction and get him started.

And of course you're right about shrinkage. Hell, you used to be 6'2" didn't you?

I'm glad to hear Jane's doing well. Greet her from us. I'll bring Dex next time I'm up. My turn to buy. Addy's maybe coming home for a while next month. I'm sure she'll visit your neighbors. You take care.

Mark,
You got theories on shrinkage? All in the spline or do the legs shrink too? Implications for bike fit?

I have some sad hews for Addy. Marlene Bibeau passed way this summer after a stroke. I learned some things about her after she was gone that I'd like to share with Addy.

Shrinkage;
I recently read two things that knocked me for a loop.

A. Prilosec (AKA Omeprezole) leaches calcium out of your bones. I'de been on it for many years.

B. Cyclists who don't walk much, like me, are prone to osteoporosis. It is believed that load bearing isn't enough, you need to have some impact too. My spine gets plenty of impact due to Brooks saddles and all the Pawlenty holes in the spring. But my legs do not.

My legs are clearly shorter than a decade ago. Overall I've lost almost two inches at age 64.

Got any British bikes?
http://abcetour.com is next weekend.

No British bikes (unless you count the Peter Mooney, who is originally from England). The British bikes tend to have those crappy Sturmey Archer hubs and stuff ;-) Okay, the ball's in your court.

Next time you're in town, please swing by Angry Catfish bike and coffee shop. My name is Dave Lee think you might like what's going on here. I would love to see the Ghost in person. 4208 28th ave Minneapolis MN 55406

You're right around the corner from the old Kvale shop?

when will this frame be done? it is going to be something special!

@Virag, It's up and rolling. Search "Kvale" in my blog search box (upper left). Scroll through the junk and you'll find some pictures and a complete build list.

In two weeks my new stem will be back from the platers. I still haven't had custom racks made.

Thanks. All new bikes are special.