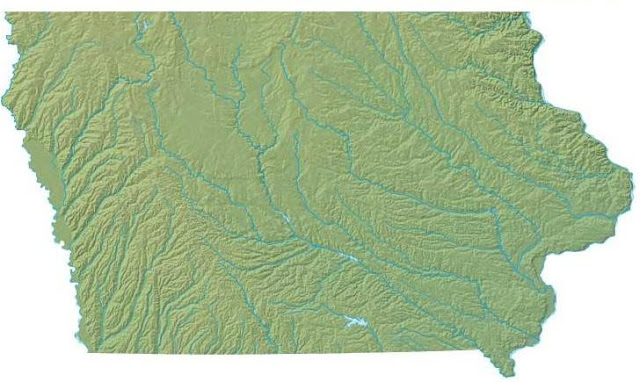 Iowa, an innocent looking state - flat and square. A really big cornfield. A couple of thoughts. When Taylor Zimmerman was over the other day we were talking about RAGBRAI. The Z-Man has ridden back and forth between Minnesota and Colorado a few times. He said climbing over the the Rockies on his recent cross country jaunt was hard, but once you get to the top of a mountain you ride down into a valley for the rest of the day. He thinks western Iowa is worse, a real bitch. The hills are really steep and it's up and down, up and down, all day. In the past, Mr.Gabus has brought friends from California to ride RAGBRAI. He said they think it'll be easy because Iowa's is flat. By day two they are real quiet. The organizers like to spread the ride route around and it'll quite likely be across the southern portion next year. You know, across the wrinkly part, although it is possible the loess hills aren't as steep down there.

Western Iowa is one of the most beautiful places I've ever seen.

Nothin beats RAGBRAI at 6:ooam you've been on the bike about 30 min. You arrive at a Big tent which is Chris' Cake. Well after about 4 or 5 flap jacks and you are ready to ride. Nothing like riding with a huge rock in your gut for the next ten miles.

The flapjacks must of sold Barin.

I detect a hint of hedging the bet. Focus on the cakes.

James, I will furnish a bike for you. You'd look really good on the Peter Mooney. Aye?

Are my eyes in disbelieve! Is Margadant in? Names and addresses Please. SOB this going to be one for the books. I think Kvale better warm up the Torch!

The ball's in your court. This could be the 14,000 foot climb that has eluded you the past couple of year. By God and Jesus Christ if you do this, I will strap a bungee cord on your bike and we will pull you like a travois and get you up the hills to coast down the free side. Or, for Christ's sake, drive your pickup and meet us at the flapjack stand every night. You can carry the baggage and regale the boys with your tales. I miss good face to face time. (Dex is coming over tomorrow.) Maybe we can get Kvale to come along and embarrass us all. God, would that be fun.

Oh gaawd. The next thing you know all of you will be in a circle singing kumbaya. I do like the Margadant pickup idea though.

WHAT?! no campfire songs?

BKM stuck her head in and asked why I was laughing and I explained what was being perpetrated. Eliminating the descriptive 4-letter adjectives, her response translates out to, "Are you out of your $%@*$ mind?! I'm not going to be around to pick up the *^#&@(* pieces. You better tell that #*&#^ Berg you aren't going to do this, you dumb #*$^%!!" (Sort of gives you the flavor of the conversation. You had to hear the tone of her voice to fully appreciate it.)

This summer's Colorado train wreck may have spelled the end for a lot of things. I shelled out both knees pretty badly. I had a cortizone injection on the left knee upon returning and the shot hasn't had very much theraputic effect. So biking is not in the picture.

That being said, shellepping baggage in the truck has some appeal -- but there would be no massage service, at least for the male members of the team. But I'd need a lot more details and coaxing.

By the way, I was in AL last weekend for a nephew's wedding and escaped Saturday morning to find some relief. You and Lorna had already cleared out and I got the fish eye from the Pug. I talked with Westrum -- give him two of your best brews, then keep them coming; he needs therapy -- perhaps a RAGBRAI experience to write about. Creative juices and all.

For Christ's sake, use your telephone.

I'll get back to you on the rest. Brenda is overly theatrical. Tell her to cool her jets, we won't let you get hurt. (I can picture the lady seething.)

I just put Dex to bed. We went to the Old Mill and drank the last Schell's Barrel-Aged Schmaltz Alt they had. As it was a one batch wonder, it's GONE, gone.

And......jeez, those knees have been shot for ten years anyway - no, longer than that. Bone grinding on bone. And you insist on continuing your marathon mountain hikes. Life is short and getting shorter. FIX THEM! So we can get on with our adventures.