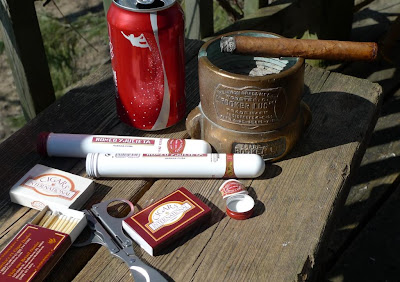 Pictured are the necessary accoutrements and couple of illegal Cubans, one lit, the other to save for another day of lazy sunshine. Thank you to the brave soul who smuggled them past the ill conceived foreign policy for me.
What I really want to talk about is the ashtray. My father-in-law, Bob, was a volunteer fireman for years and a packrat supreme. When he died we were picking through his life's flotsam and jetsam - the things that he had decided were too heavy to take with him on his journey. Among the musty clutter of old paint, broken tools and junk in the garage were the ends of a rotted old firehose. They were heavy, each about a pound of battered bronze. They had nice heft and felt good to hold, but were completely useless. I didn't really want them, but for some reason I was drawn to them. I picked one up and tossed it in the car. It lay in the trunk for awhile until the thumping of it rolling around drove me nuts and it migrated to a shelf in my garage.
Like most men of the time I was a cigarette smoker and one day it dawned on me, it wasn't a hose end at all, it was an ashtray! albeit one without a bottom or any way to hold the lighted fag. I pulled off the canvas hosing and took the end to my friend Phil Wylie and explained my dilemma. A few days later he returned it. He had cut a 10 or 12 gauge circular steel disk, brazed it in place about halfway up and milled two slots in the top rim to hold the cigarettes. Worked good. Eventually I was overcome by wisdom and a will to live, so I quit smoking. The ashtray went down to rest in the basement for a few years.
Later I discovered another vice - cigars, but there was no way to prop a lit cigar in Bob's ashtray. By then Phil had gone to the great chopper shop in the sky so I took it to Al Dahl who milled one of  the slots larger and fit it with a cigar rest made from a piece of brass pipe.
It ain't nothin' special. It's just a old free ashtray that two old friends reworked along the way.  Don't mean nothin' to me. Nothin'.

This reminds me of a Punch cigar that was given to me as thanks for a favor I did to a beautiful co-worker who went on an agricultural trade mission trip to Cuba, and even had her picture taken with Fidel Castro. How I wish I could have gone on that junket!

A friend went to Margarita Island during our Christmas break and brought back a small 5-pack of Cohibas. We sat by the swimming pool at his townhouse and smoked. I am not a smoker, but I really enjoyed that Cuban cigar so much I had a second one.