Whereas I lean toward American bikes from the early '80s, Masini has fallen in love with all things Italian, particularly their old bicycles and more specifically the Galmozzis. Jack Gabus, on the other hand, is a heartless womanizer, lusting and grabbing at every pretty piece that rolls by. While I have sworn off acquiring more rolling stock, I too have my weaknesses. The first is a specific bicycle, the Ulwelling 1976 Cinelli SC. This baby is loaded. Put together by Spence Wolfe, it has Cinelli fenders, the original Cinelli M71 clipless "death pedals", Cinelli Unicanitor saddle, Pino Morini titanium bottom bracket and the Cinelli Bivalent hubs. Mostly I lust for it because it belonged to a good friend. We knew he was dying and we had agreed to a price, but when he did die it was still unexpected and the deal was never consummated. 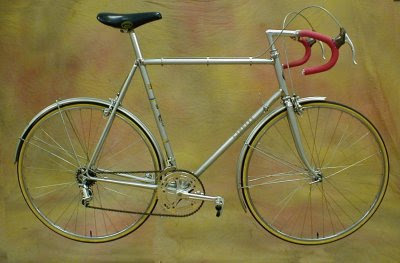 The other dream is a marque, the 3Rensho - the 3 Victories. They were made by Yoshi Konno. To the best of my knowledge Mr. Konno is still living, but he was paralyzed in a bad car accident years ago and can no longer build bicycles. He built clean frames, frames as fine as any made. I have never had a frame that I felt really comfortable equipping with Japanese components. If I ever were to own a 3Rensho,  I think I would like to build it up with Suntour Superbe Pro components rather than the Shimano Dura-Ace. The Superbe stuff just don't get no respect. 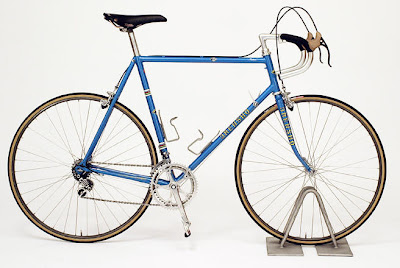 These are all loves from afar, the pipe dreams of an old married man with no money, no time, and no room to store his dreams. Maybe just enough room to squeeze in a Nagasawa? American master builder Richard Sachs only has one bike by another builder. He found room for a Nagasawa.

That 3Rensho is sweet. Those have always been on my list of lusty dream bikes. Yes on Suntour Superbe!

While I am a Philistine when it comes to the functional merit of these gizmos, I must say the I am taken with the lines of the
3Rensho. That's a beautiful bike.

And the Cinelli is inredible. The stories behind these bikes and brands deserve more attention than us collectors can give online. When I win the lottery, I'll fund the book or film version of the history of Italian bikes! ps - check the clanger post, I have new info!

superbe pro is the finest parts ever made, if you're looking at both design and finish. I also like the Mavic stuff, although the French quirkiness is not easy to live with day to day.

When I was a young racer in the early '80's a mechanic at the bike shop were I purchased my first real racing bike owned a metallic silvery-pink 3Rensho. I've wanted one ever since! -Tony

Jack,
I understand your offense. Are you denying the implication then?

A bike whore is a bike whore. It is the truth that hurts. All though most of the Italian collection is from the earlier days. In the last 2 years I come to an opinion that American Steel frame builders in the 70's and 80's are or were far superior (that should start and argument).

You won't get an argument from me on that. If fact, we may be in a Golden Age of Bicycles right now. (Take that Jan.) The only thing happening I don't like is builders, particularly young ones, mistaking flash paint jobs for quality workmanship. Because of my fogginess, I also cannot appreciate a powdercoated, tigwelded frame, no matter how well executed.

Not to mention the price of a frame. I heard at the hand built stuff was going for $9K. not in todays econ.

I guess they don't the princples of "KISS". Keep it simple stupid!

if you're having trouble appreciating a tigged frame, all you have to do is buy one. I mean a nice one--I have a Steelman, but try a DeSalvo, a Serotta, a Sycip, a Strong etc. . . ride it, enjoy it for a while and I'm pretty sure you'll see the light.
mw

Michael,
I am simply not interested in a bicycle that isn't a lugged, butted steel traditional road bike. I drag the baggage of my generation and my own stone chiseled aesthetics. I'm not saying that tig welded, fillet welded, carbon, titanium, mountain bikes, whatever, aren't all perfectly fine, functional machines for someone else. I have owned some of them. They just don't give me any joy at this point in my life.

I totally understand love of old school . . . I'm mostly like that myself, with my seldom-ridden Cinelli, etc. I have lots of lugged steel bikes. I also like to ride offroad. Last summer I had a high-end hardtail mtn bike stolen, and with the insurance I bought a current model, American made carbon wonder bike with long travel front and back. The first time I took it on the local trail it was like: holy mother of crap. it was like: I had no fricking idea what I could do and how fun it could be. It's not as dramatic as that with road bikes, going from one material/construction method to another--but still there are differences, and to me some open-mindedness every now and then is a good thing, more fun. That's just me, though, I like fun. . .

I have never been accused of being open minded. Opinionated yes, never open minded. Seriously, I think all of the new stuff is probably better. I just don't care.