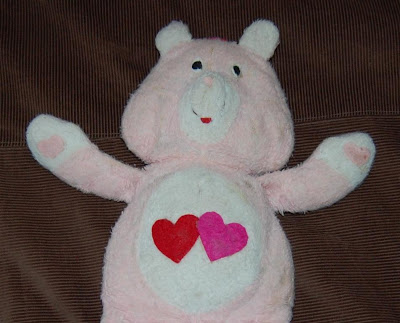 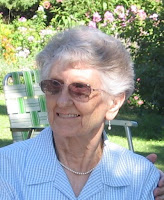 Ad has had Dorothy for as long as she can remember. Dorothy was named after the maker, her mother's Aunt Dorothy, the last living grandma of the generation. At the time Dorothy was made where were a series of marketing driven teddy bears called Care Bears. Dorothy Bear was loosely based on these. Among the other stuffed toys, Ad was given a couple of the factory Care Bears. They were okay I guess, but they were not real, and so went up on a shelf in the closet. Dorothy never went on a shelf. She shared Ad's bed and comforted her on the long, lonely nights. Over the years Dorothy became worn from too much love. The felt hearts wore off, the eyes fell off and her fur became noticeably thin. Eventually the eyes were replaced, she got a little additional stuffing and Dorothy got a felt heart transplant. Ad took Dorothy along to college and then to her apartment in Minneapolis after she graduated.  The only reason Dorothy isn't in Bangkok right now is because there simply wasn't room for her in the backpack or shoulderbag that must transport all of the possessions. Dorothy's waiting patiently at home.

Hey, this is Marissa!
I was so delightfully amused with warm fuzzies when I read this blog. Dorothy made 2 pink bears and 1 blue one. My brother got the blue one when he was a kid. When he grew out of the whole stuffed animals thing (probably earlier than most, I think Andrew has always thought of himself as a macho man) he gave it to me. I appropriately named him Bud. Bud still cuddles with me every night. I'm glad that I got to be apart of the cousinly stuffed animal club, even though I wasn't meant to be.