It's a beautiful day. Bud (da dog: aka Damn-you-Bud!) and I spent some serious time down in the garden, working a little, half napping in the sun, and watching Hummingbirds probing in the flowers and Cedar Waxwings in the Juneberry bushes. There is a bandshell across the bay and the music of the bands playing on Sunday afternoons carries across the water. They are small time groups, sometimes Conjunto, sometimes Gringo, but like all good Minnesota garage bands, they can go from Country, to Rock & Roll, to Polkas (known around here as "Old Tyme") at the pull of an accordian. Ya, you betcha! 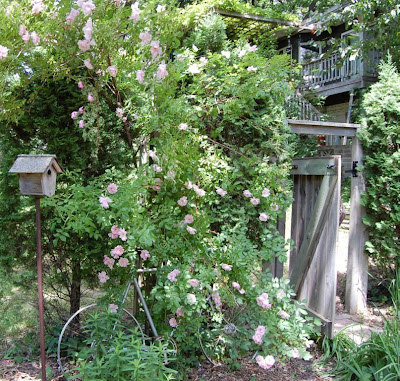 The overgrown bicycle is a 70's Volkscycle. It is surprisingly lightweight, but really poorly crafted and finished. I was intending to build it up more, but the vines and canes seem to have taken it for their own. I guess it will slowly compost in situ. 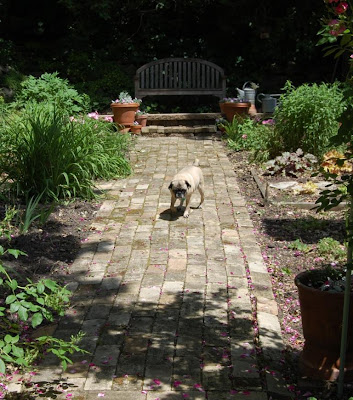 Bud's main hobbies tend to involve revolting odors and he doesn't seem to appreciate music or songbirds. But he knows how get the most out of a little sunshine and he's generally good company. 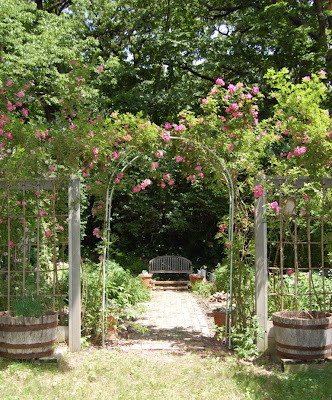 Addy NOT in India 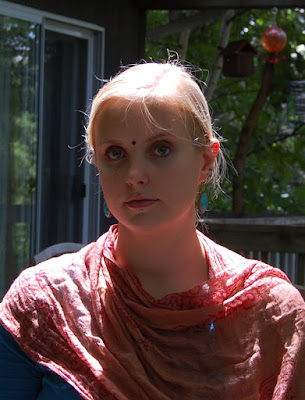 She's been reading Zen and the Art of Motorcycle Maintenance, tempered by her old friend, Jack Kerouac, to pass the time. She just booked bus tickets for herself and her younger cousin 'Rissa (her Addy-in-Training). The next in line. On the 5th, Thelma and Louise will be long gone on Greyhound on a rambling trip south, then over to San Francisco for a few days, before heading up to Seattle, probably by train, to visit relatives. Eventually an airplane will bring them back to the Heartland. It's good to have her back for a while.
3 comments:

The leaves of the oaks were flashing with reflections from the sun bouncing off the water. Breath taking...but effemoral and impossible to photogragh. Sorry. 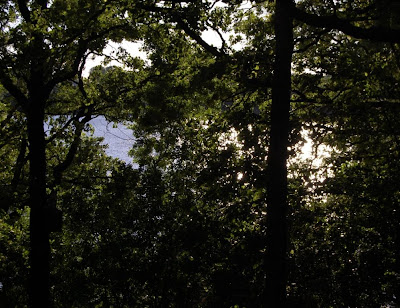 Ad called from India this morning, which made it already a perfect Father's Day. It was cool and sunny, with just enough breeze to keep the wind chimes singing. In the afternoon we did some light garden maintenance and then I read most of the day.

I finished re-reading A River Runs Through It again. Stylewise, Norman Maclean is the flipside of Ernest Hemingway. He's maybe a little wordy, but spirtually he's certainly more in my world than Ernest. I was reading from a hardbound copy with woodcuts by Barry Moser. It's tough to beat reading a good story from a real book, beautifully bound.

We got some grass fed beef from Amy's uncle, so in the evening we had steak and mushrooms on the grill, with just a little too much Tempranillo.

Another good day notched on the calendar.
No comments: 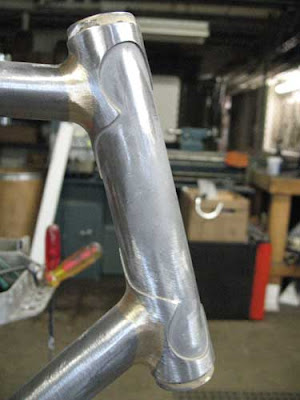 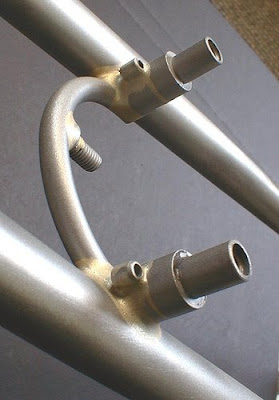 Not from my bikes. No comments, other than I love elegant curves and good craftsmanship. Nice work, guys.

These are some of our Chinese Tree Peonies in blossom now. They're really stunning. Some of the flowers are 8 inches across. It also illustrates my lack of skill with a camera. One of the reds is distinctly coral, another rosy and the third a dark wine tone. Just take my word for it. 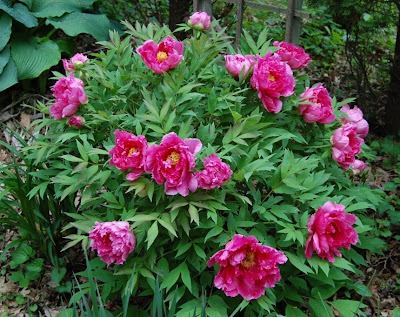 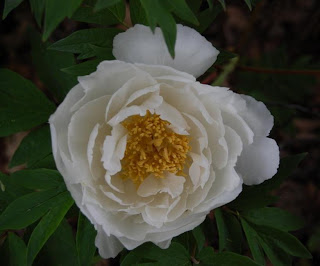 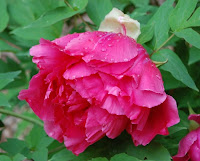 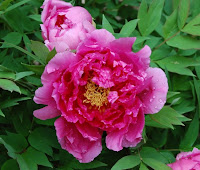 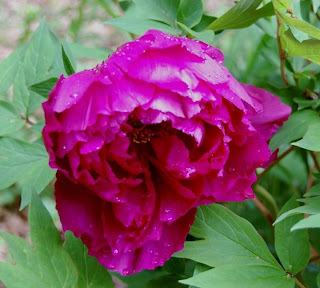 We received a call last night from my daughter, Adena. She is in the Himalayas, living with a family in a village outside of Dharumsala, the home of the exiled Dalai Lama. She is part of a group teaching papermaking to Tibeten exiles. She has an Art minor, with papermaking as one of her loves. I always viewed papermaking simply as a nice craft, something to do with your hands while resting your brain. I don't think I believe in destiny, but it does seem she was drawn to papermaking for a reason.
No comments: 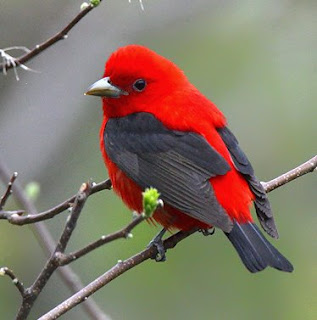 This Spring we have I.D.'d over 40 mitratory birds, mostly various Warblers, in our backyard. Most of the Warblers have moved on, but we still have two male Scarlet Tanagers hanging on. There are no females, but the males seem quite attached to each other. The only explaination I can think of is that they are probably gay. We are hoping that a female will show up eventually, and one of the males will stay. Though that's not likely, the habitate is pretty ideal, except of course, for the jet skis and power boats. Maude Koevnig, the sweet little old lady who used to live next door, referred to them as, "Those Goddamned Sons-a-Bitches!". She was not particularily religious, but used to say that she hoped heaven was as lovely as Oakwood. She lived here in the heart of Oakwood in a little Victorian cottage, surrounded by her books, for 65 years. Where ever in this Unitarian universe her soul is resting, I hope it's green and beautiful, and there are Warblers and Wood Ducks.
No comments:

After a mild Winter, Spring came to Oakwood late this year. The leaves have just about filled out, but the oak leaves still have a Spring transparency. When the light shines through them, it tints the sunlight green, rather like stained glass. There is a tendency to speak in a church whisper now, which will pass when the leaves turn to hunter green leather. I had a friend who had recently moved from New England. He kept committing on how green everything was out here. I really don't think Minnesota is any greener than New England; it just happens more suddenly and a little unexpectedly. All of the energy of nature is held pent up through the Winter, and when it can, it just explodes with life. 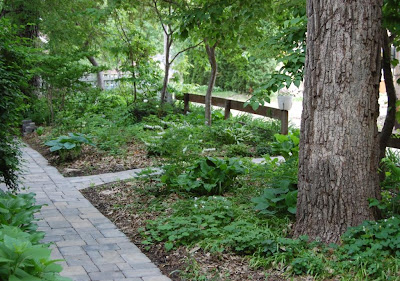 The entry garden. Unkempt, but lush. As always, I have good intentions for grubbing out and moving plants, and replacing the failing fence. 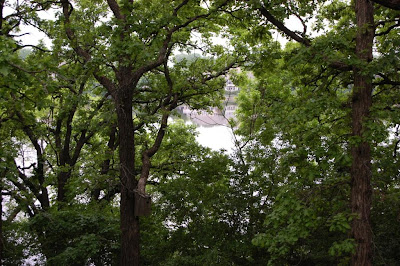 View off the back deck through the trees to the barnroofed, over-garaged, starter castle across the bay. A classic case of money not necessarily equaling taste. In fairness, I should note that I may be a little bitter. They built on that location so they could have a view of my oaks, and then cut down all of, what had been, my vista. I considered cutting down my trees to spite them. After I had cooled down a bit, that seemed possibly short-sighted. I am, as Hillary says, still reserving the option. 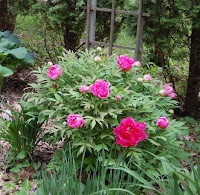 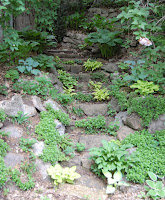 A couple of shots of the flower garden. No roses yet. The five tree peonies are pretty spectacular, in a more delicate way. This is the first or second day of flowers - mostly buds. In two days the bushes will be covered. But I probably won't be out with a camera then. Take what you get.

The steps should be repaired, the dwarf hostas grubbed out and a handrail installed. I like the look, and probably won't deal with it until someone turns an ankle. Probably an old gardener. Me.