I realize nobody cares about the Growlery except me...and Christy from next door. He comes over a couple of times a week to help me sit, pontificate and smoke cigars. Often he looks around and mumbles things like, "This place is just (bleeping) marvelous." He should know; he once owned it. I ended up with the building because Christy and Judy were adding an addition on their house and the storage shed was in the way. It wasn't much. It had a dirt floor, rotten windows and cobbled together shelving. One of his carpenters likened to something that looked like a kid's treehouse. He obviously was not a man of vision.

The first year I worked on squaring it up, pulling in the splayed corners and getting it onto a foundation and putting a floor in. The picture below is year two - insulation and electricity (dropcord through the window). 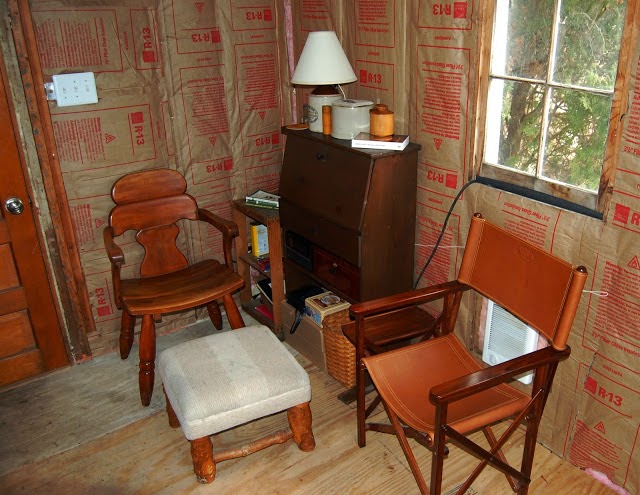 The pictures below are as of today. I have enough recycled cedar to side the exterior and I really would like a small garden storage shed off the lake side and a cupola with a wind vane, etc, etc.  I would estimate I'm only about half done with the project. 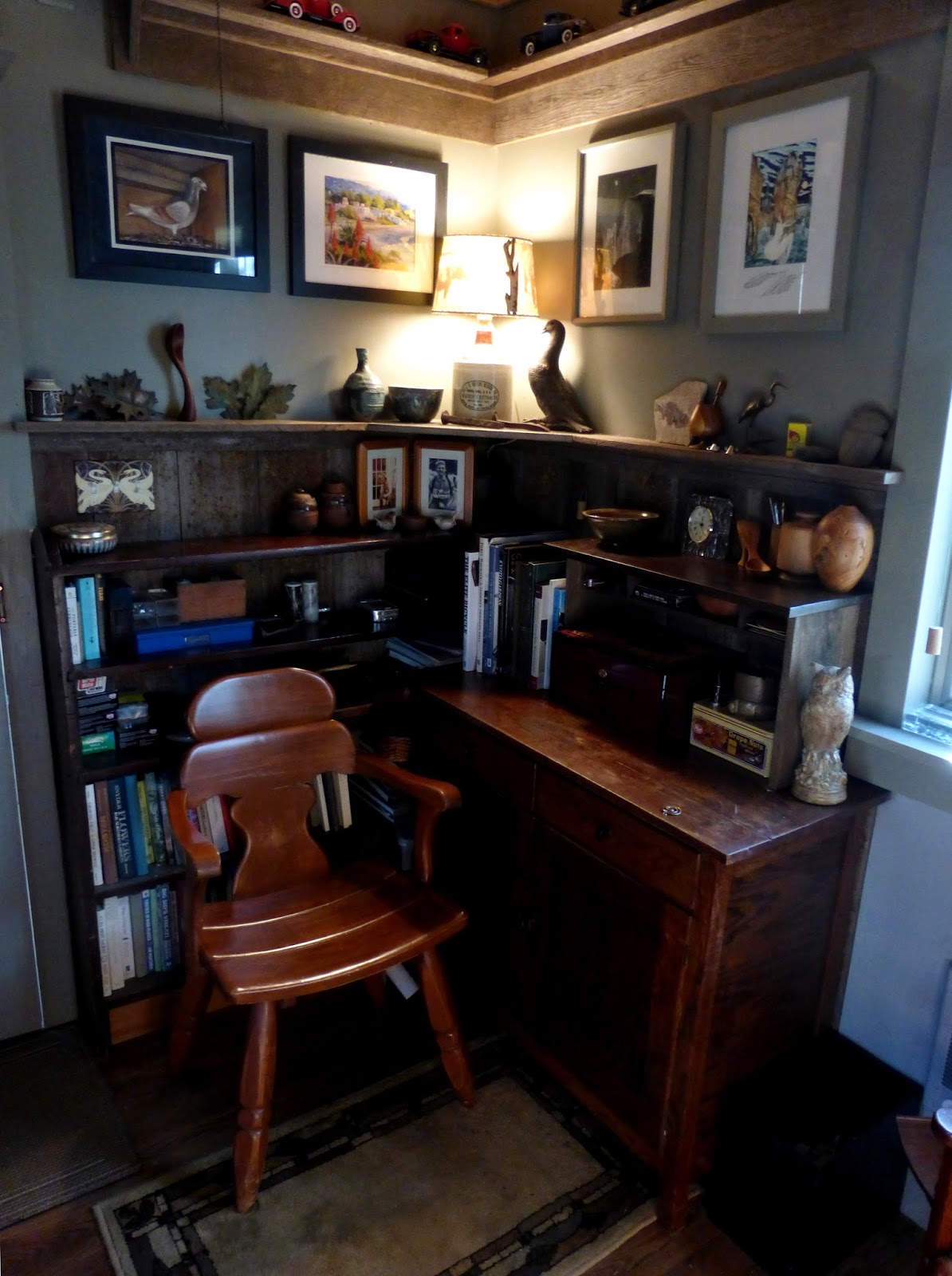 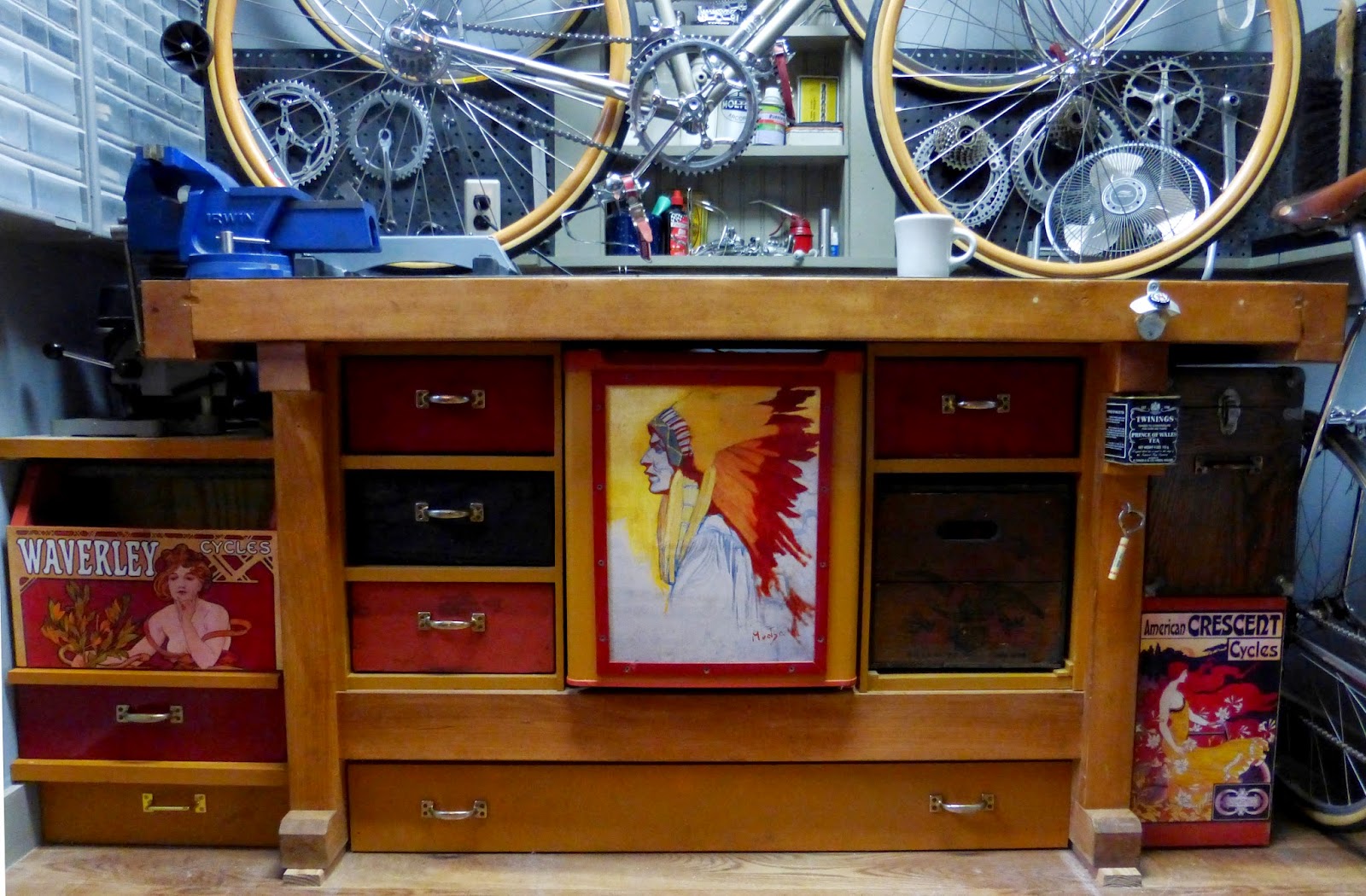 This thing rides pretty sweet. It did have simple swept back bars which always felt a little awkward and didn't let me stretch out a little, which helps my old back. I still have a bad shoulder, but whatthehell, I'm pushing 70 years old and over the years I've bent and broken some parts a little. I may put a bigger chainring on. Last weekend I couldn't keep up with my daughter on her Goodrich and I don't think she was pushing it hard. Then again, maybe it wasn't an equipment issue. Yeah, it musta been.

Yesterday was warm and sunny. I went over to Lestrud's to sit in the sun and have a drink or two. He is really good at building wheels and he had just finished building a new wheelset for me. They are smooth as silk and beautiful - Kirk Pacenti rims laced to Curtis Odom hubs with DT Revolutions - built up by a disciple of Dan Ulwelling. Nevermind who he was, it makes them even more special to me.

Perfect? Well, the Colt Saddle looks a bit chunky, but my ass is taking a liking to it. A Brooks Swallow would look sweet. And maybe the whitewall cream tires are a little foppish. But overall it is close to my vision of a perfect town/trail bike. 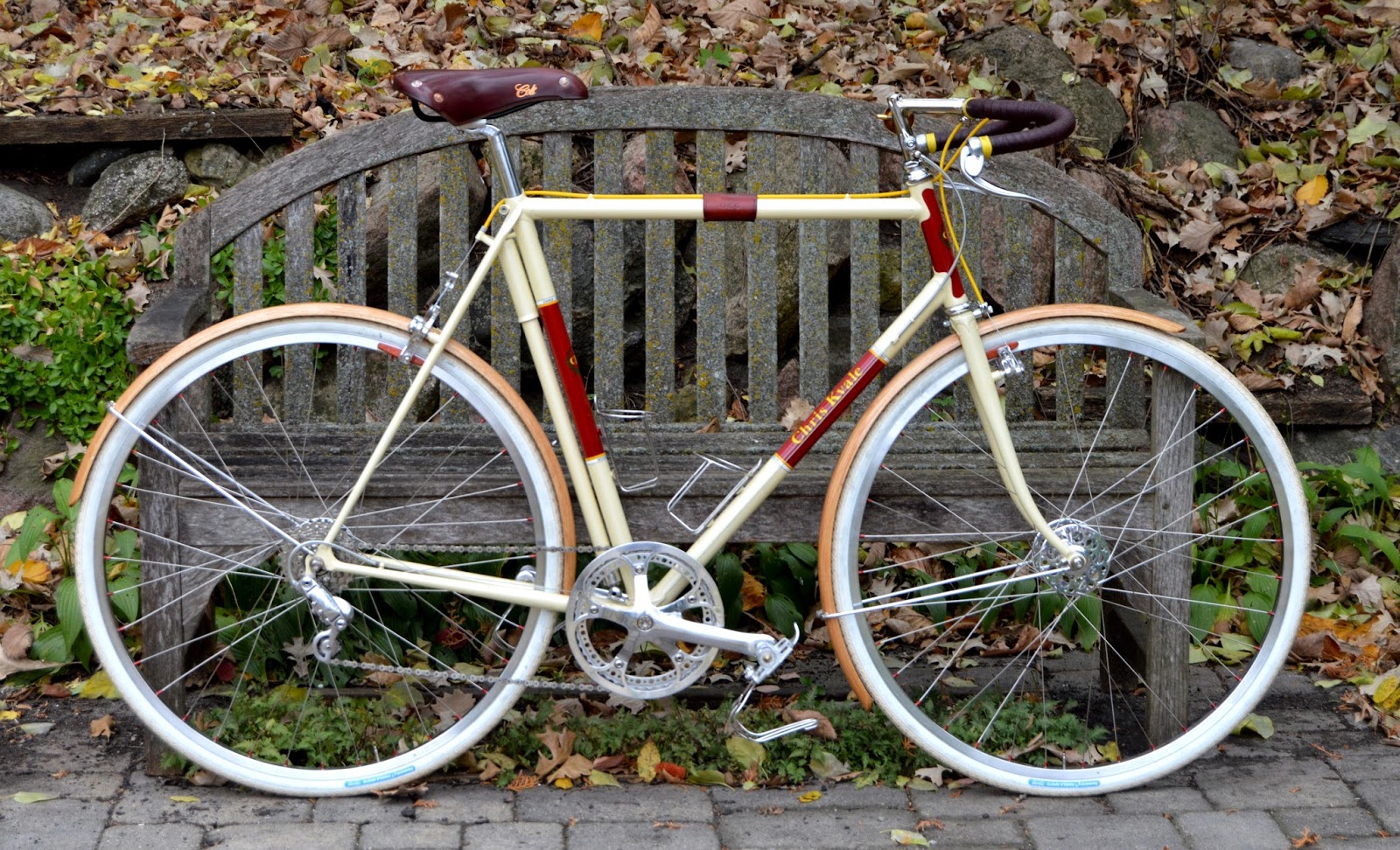 A Visit To Oz

First picture is from the front step of the Lanesboro cottage. It was a sweet autumn day, so we decided to ride bike to the pie shop in Whalan. We rolled into Whalan to bad news - the pie shop was closed and there was a FOR SALE sign. This may not be as bad as it sounds. It is more or less an annual ritual and when the smoke clears in the Spring it is always still open and selling the best pies on this side of my dead grandmother. 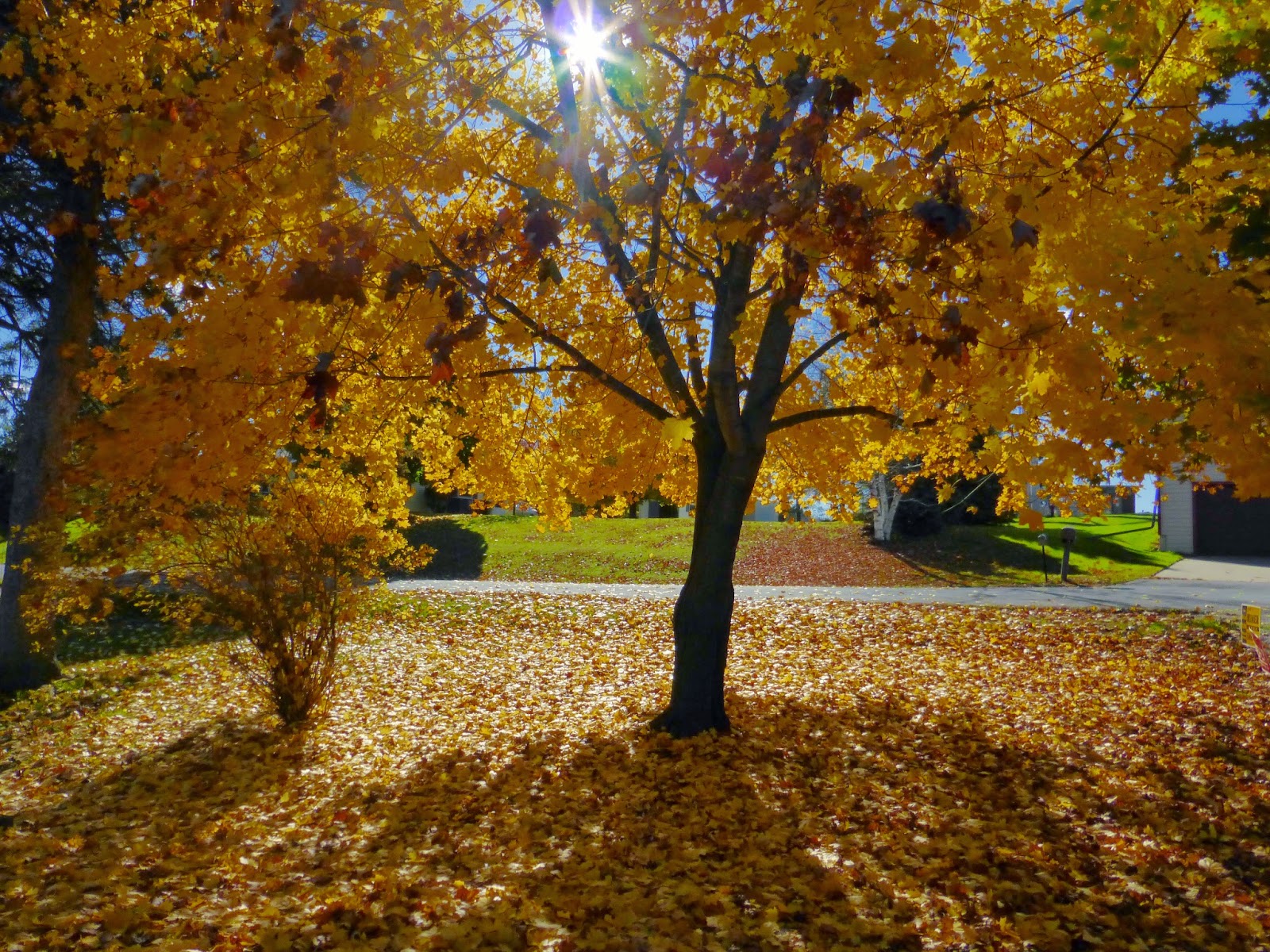 On the way back to Lanesboro we stopped at Frank's rhubarb garden retreat, which he has dubbed "Oz". Hopeful, but I didn't really expect Frank to be there, but I needed to take a piss break behind his shed anyway.

Here's some photos of Lorna - somehow I missed getting a picture of the basketball hoop. Frank shooting free throws? We think we know people, but really never do do we? 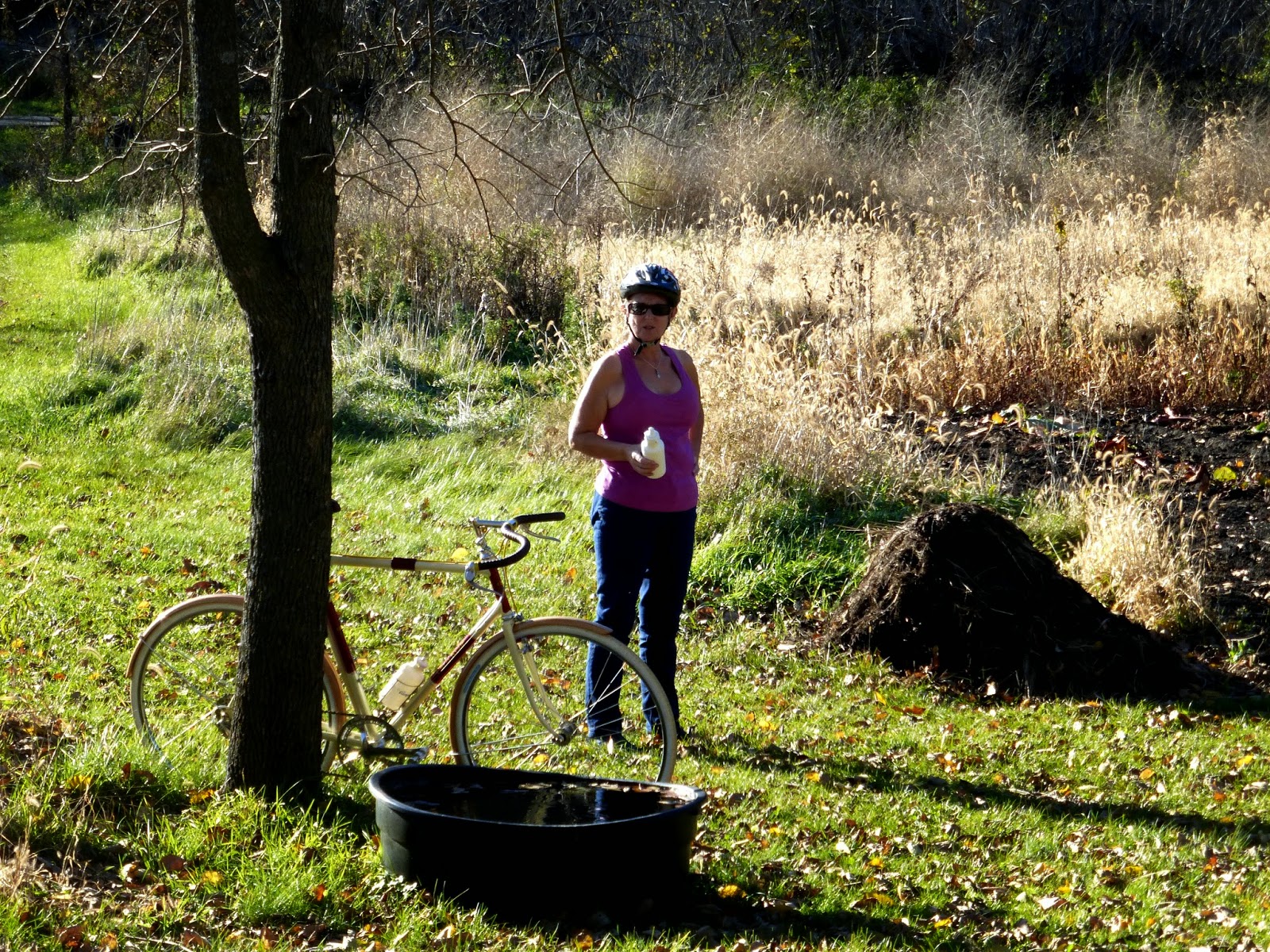 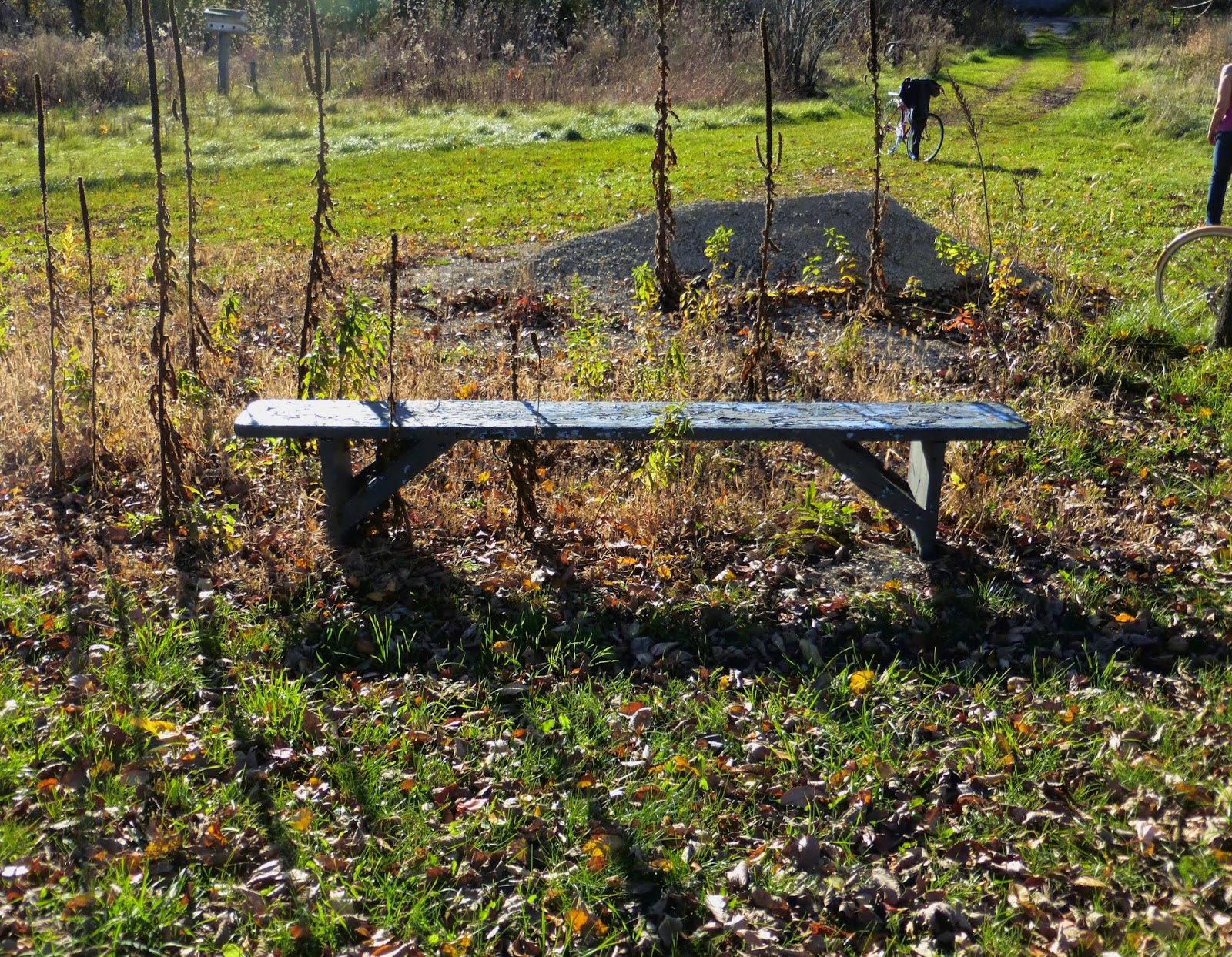 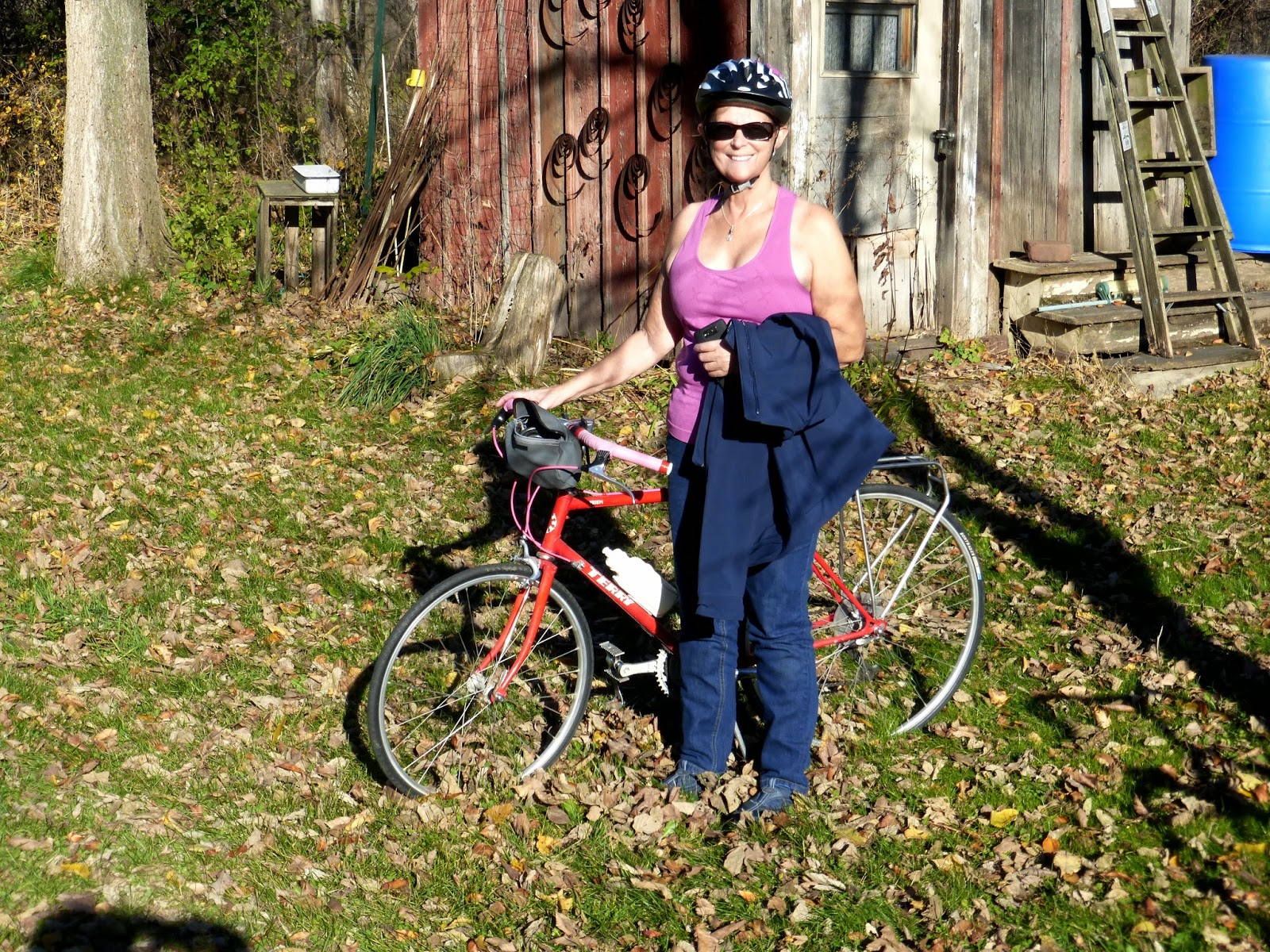 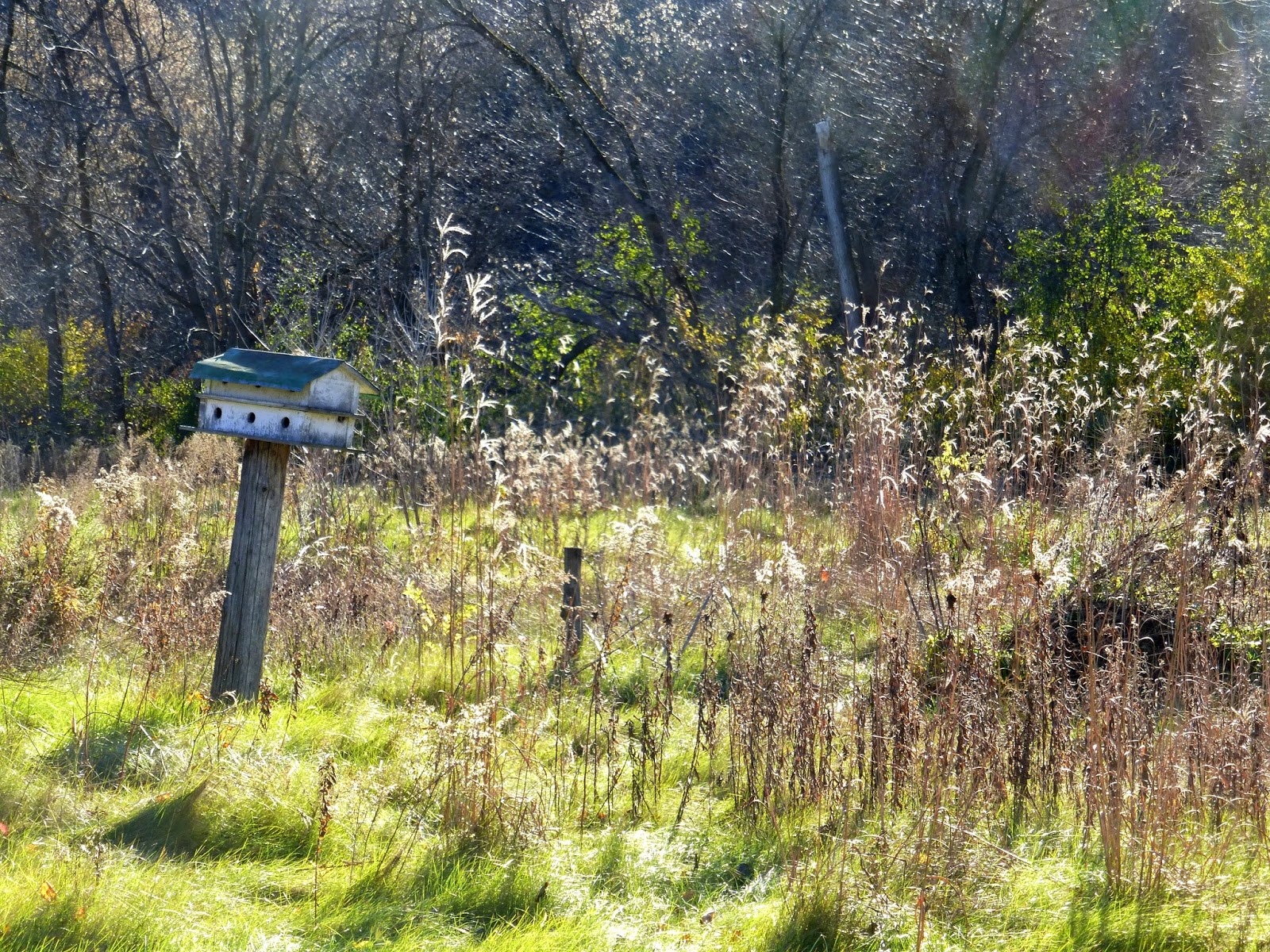 A beautiful day. I hope yours was too,
Gunner B.

Three Galmozzi's. It is somewhat difficult to date these absolutely, as neither Francesco nor Angelo Galmozzi stamped dates or serial numbers on any of their frames.

My best guess on the blue one is 1968, built by Angelo. I think that's pretty close, judging by the lugs, fitments and it has a headtube badge, which as discontinued about then.

The champagne is 1952, built by Francesco, again judging by the lugs and technology. Also this one came to me as a restored built-up bicycle so by looking at the dates on the axle nuts, the rear are 1952, the front wheel 1955. I suspect the front hub is a replacement; it is a little hard to believe someone would spec a Cambio Corsa racing bike in 1955, but strange things do happen. 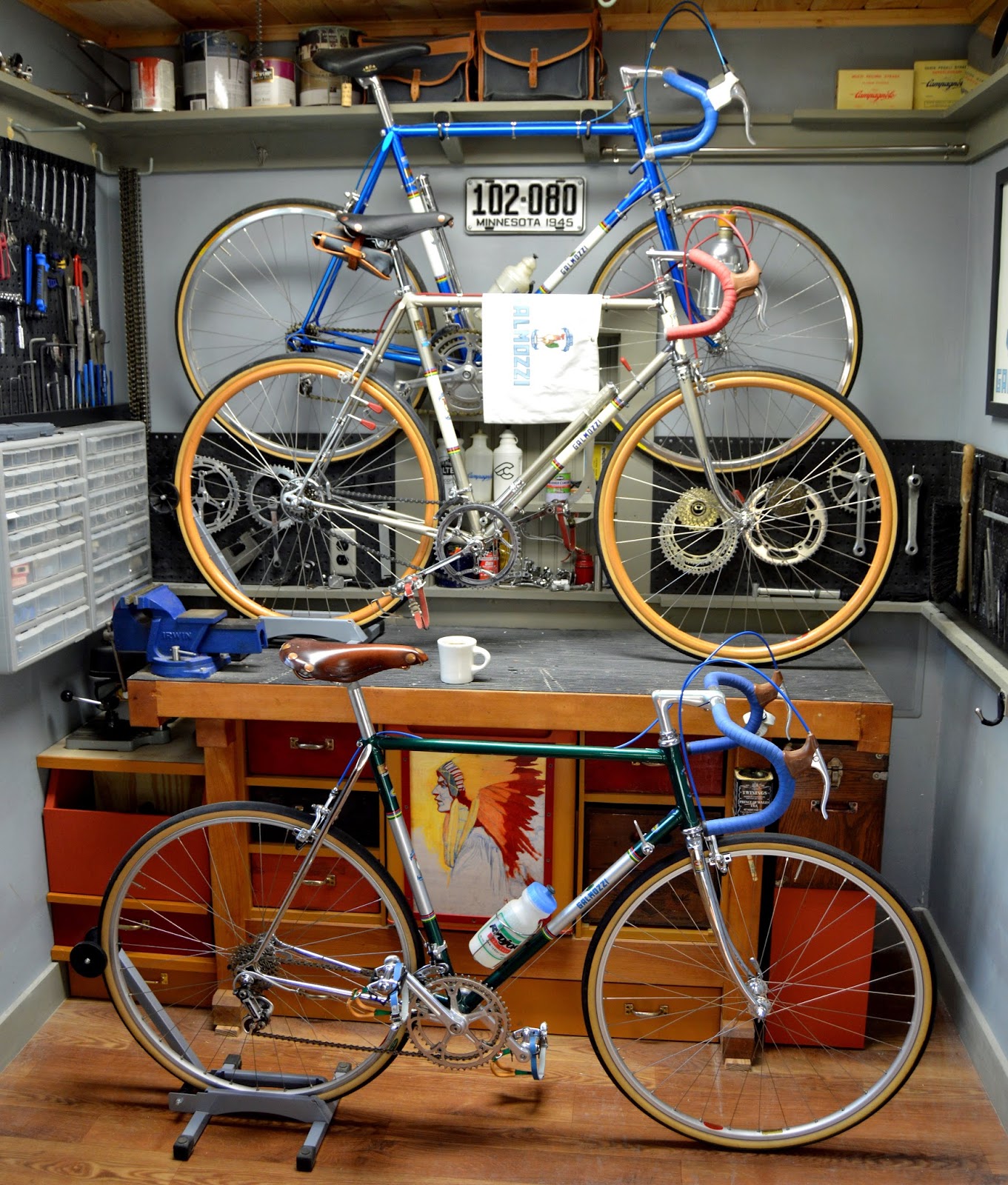 My newest, the green one is easier to date - 1984, built by Angelo Galmozzi. It came to me with a Campagnolo Nouvo Record drive train, Nitto stem and bars, Look pedals,and a wheelset with modern Velocity rims. I switched the Nouvo Record components to Super Record except the brakeset which will remain Nouvo Record - I simply like them better. The stem and bars are now period Cinelli. The wheels are Gentleman 81 rims laced to Campy hubs. I switched the seat out for my favorite Brooks Team Professional. The medium blue wraps and cable pick up the blue infill paint and Galmozzi graphics. There is also a matching pump, right down to the silver, green paint, World Champion strips and rooster graphic. Pictures with close-ups on Flickr eventually. 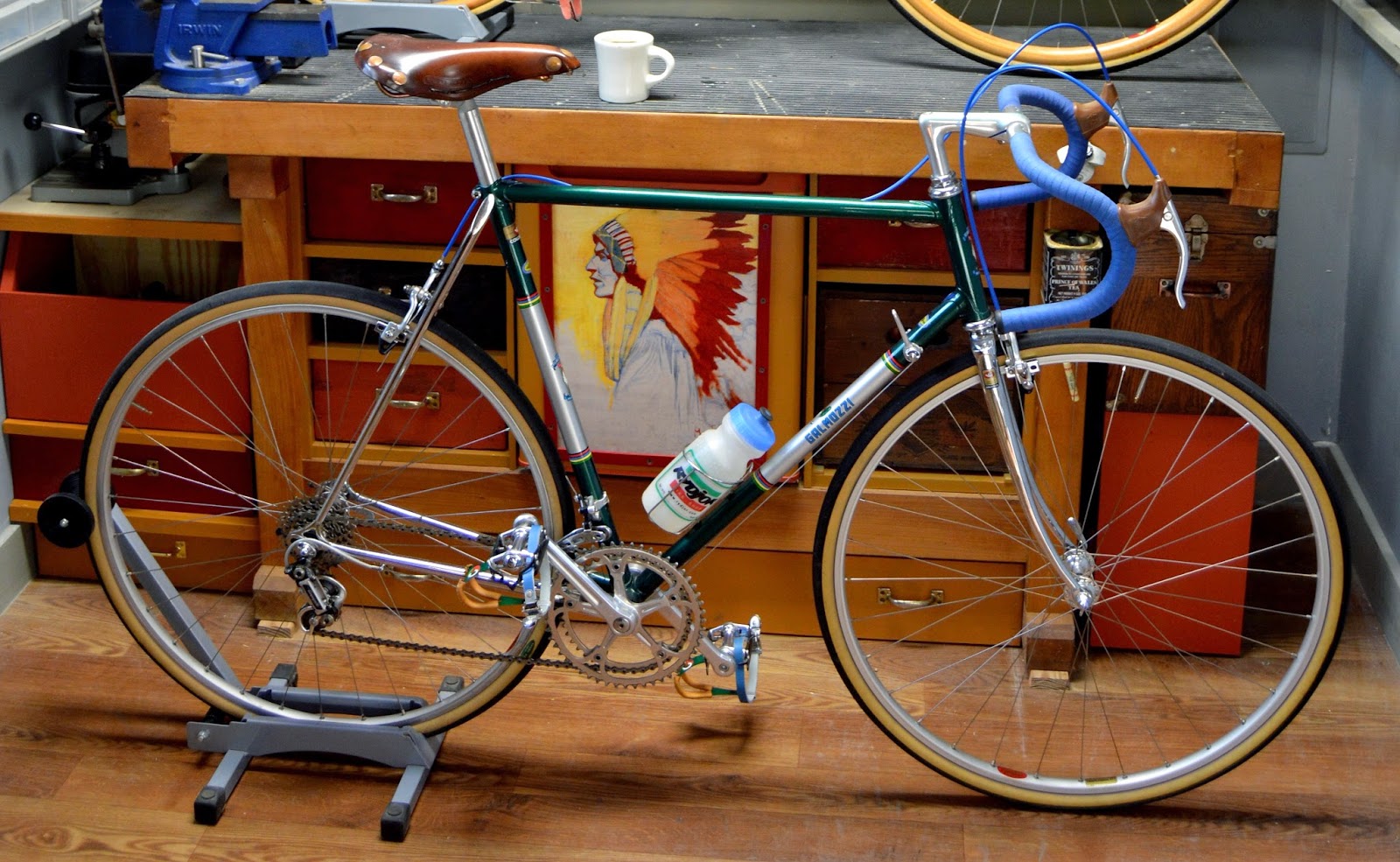 Still tricking out my workbench - painting, adding drawers, bottle recycling box, and a nice red frame on the refrigerator door - The Sioux Chief, the REAL American.

Be well,
G.
No comments:

These things tend to rotate. Sometimes there are less, or more. We have a Burley tandem that really belongs permanently in the basement ready for action just in case. They are all handbuilt, lugged-steel frames with the name of the individual who crafted the frame on the downtubes - straightforward, no cute names, no descriptive models, no brand names conjured by marketers - just who made the frame.

Be well, enjoy any Autumn weather that comes your way, Gunnar
4 comments: