A new low; a haiku with an irritating emoticon - I just couldn't resist. (Does a smiley face constitute a syllable?) 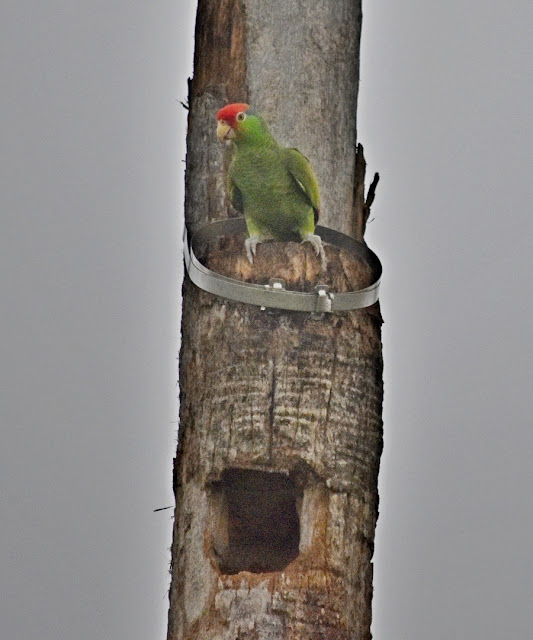 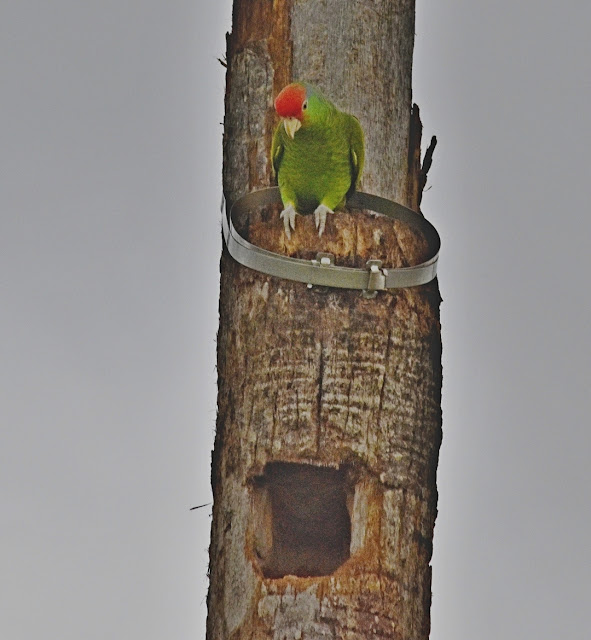 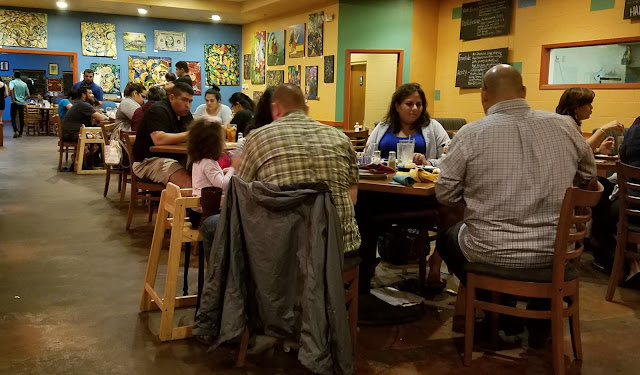 Gonna miss all that shrimp - Gunnar
No comments:

I posted this on Facebook today. A few people shared it and Lorna thinks I should also post it here.

Tomorrow morning we are about to leave our winter home which is eight miles from The Border. After living here for five years I know more about some border issues than many politicians seem to.

Drugs: Virtually all the drugs come in on trucks through existing border checkpoints. A wall would have NO impact on that, so let's take that off the table, not dog whistle the issue. Clamp down on trucks? Maybe - but it is a tall order. I just checked, about 4,000,000 trucks came across the Texas border from Mexico last year. Yes, four million truckloads to check. So let's be up front about it; the wall is only to stop people, and if people seriously want to come across I do not know how to stop them, but a wall is not going to do it.

The culture, families and economies of both countries are linked beyond what most people realise. For instance, I recently read that over half of the hotel and mall traffic in McAllen, Texas are Mexicans, mostly from Monterrey. The business people certainly do not want an 18 foot wall between them and their customers.

The local Hispanic population are not "Mexicans". They may or may not refer to themselves as Mexican, but they are a people who have lived in the United States for generations, some for 200 or 300 years, before the border was drawn, and over time many families have become scattered on both sides of the border and they are being cut off from each other. Grandma can no longer come over for a Sunday picnic.

Say nothing of what it does to wildlife movement.


Enough. Sorry for the rant. - Gunnar 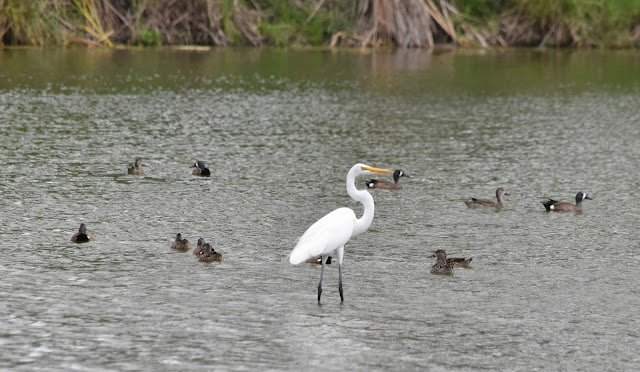 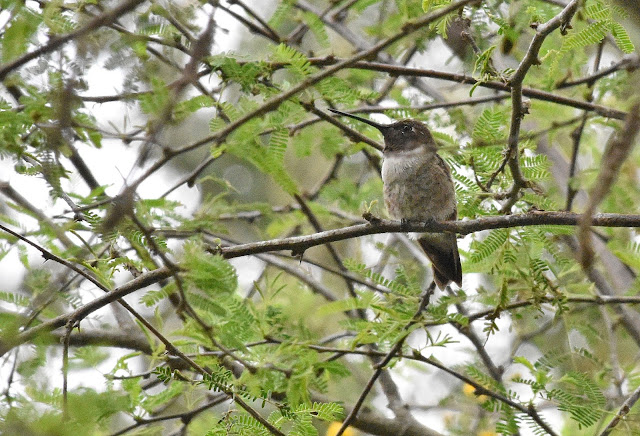 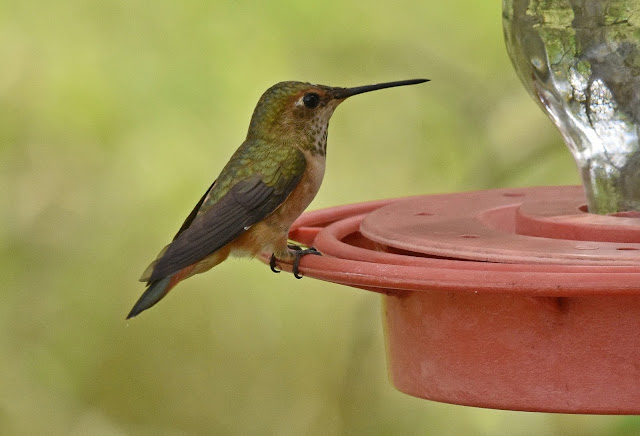 Learning to tell'em apart at a glance. - Gunnar
No comments:

The view of the parade from our balcony this morning. Last photo, a member of a charismatic church giving thanks to her god. The rains held off just long enough. 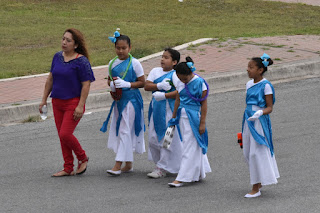 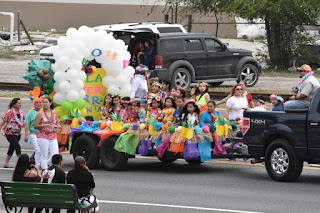 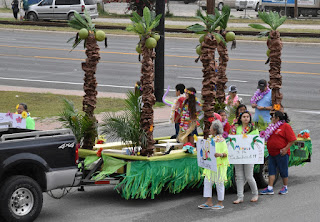 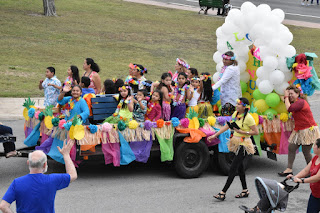 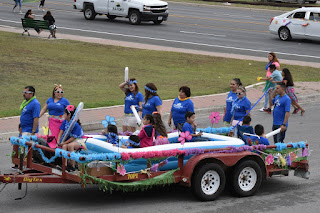 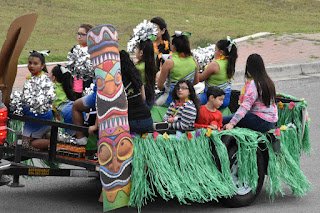 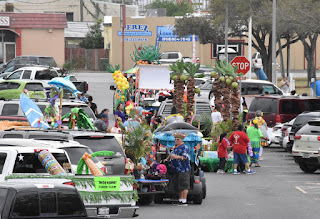 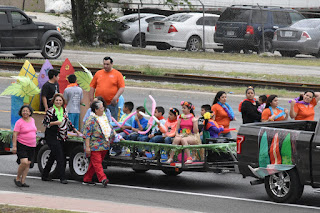 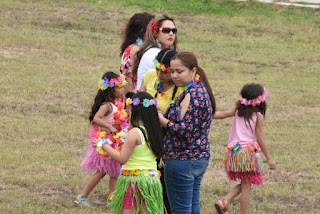 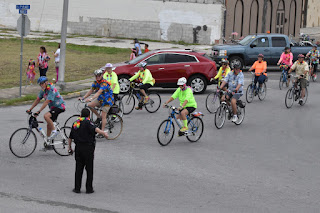 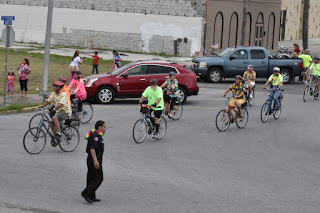 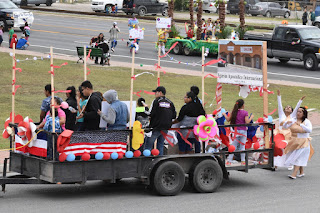 Burrowing Owl:
"On the north end of Border Road, burrow in the west ditch bank about 1/10th of a mile north of the new white drainage pipe - location is marked by a small pile of rocks on a Budweiser box on the east side shoulder."


It was still quite far away and was surprisingly difficult to spot even with the directions. Hats off to our neighbor Anders who spends a LOT of time slowly driving around dusty gravel roads with binoculars - just looking, looking, looking. 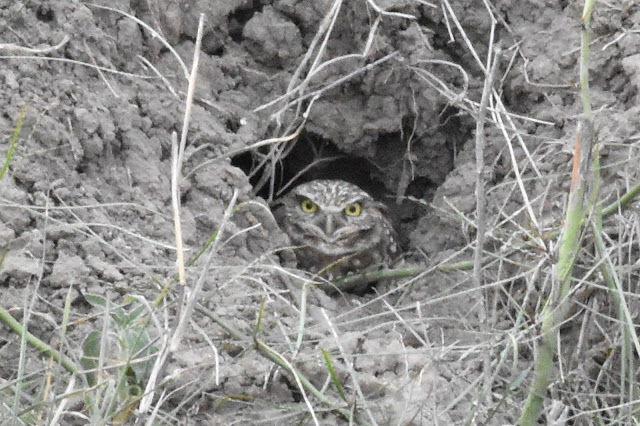 Yesterday there were also Long-billed Curlews. Anders said he has also seen Mountain Plovers in the fields out there, which would be a life bird for me. Mountain Plover is a misnomer. It should be named the Flatland Prairie Plover. They are a hard bird - rare, usually in bare fields as far from the road as possible - and they always seem to match the color of the dirt. I have been with a group with long scopes on tripods to look at them. Maybe. I could not see them anyway. With the condition of my eyes and the nature of the Mountain Plover, I will likely die without ever actually seeing one. That's okay. It's always good to have something out there, just beyond our reach.

Skimmers (and Gulls) And Terns 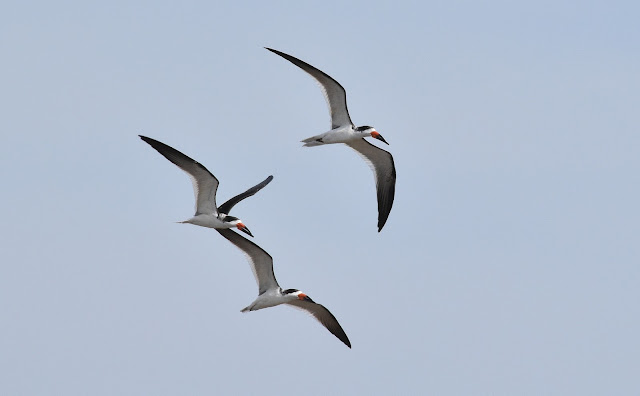 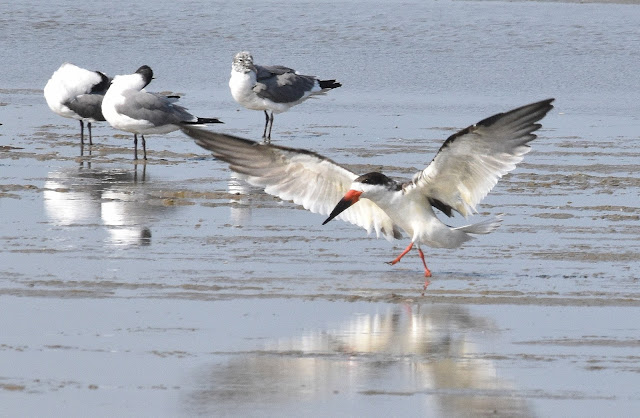 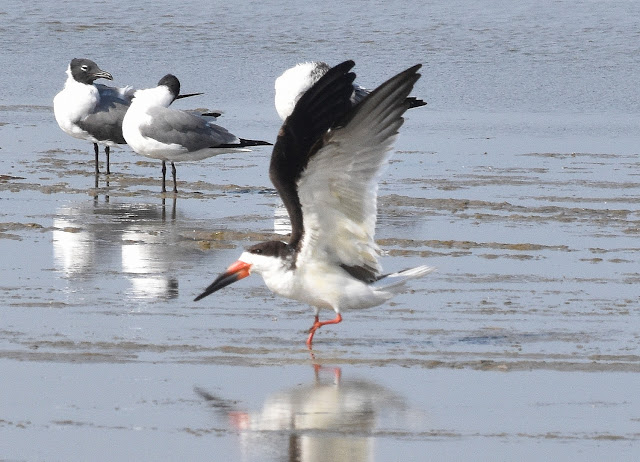 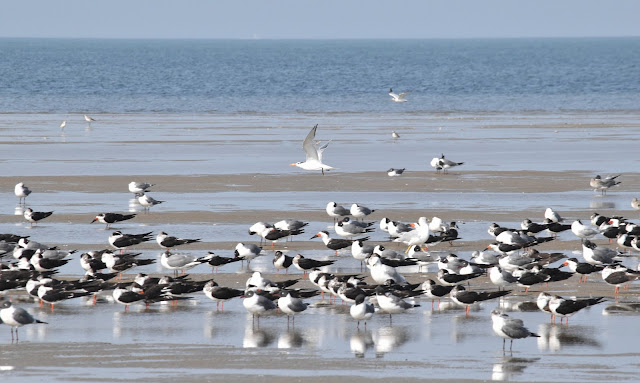 Lorna's sister Anita and her husband John have been staying on South Padre Island the past month so we have visited the Birding Center more often than in the past. We went down yesterday for a last visit. While Lorna and Nita did sister things I went birding.

Earlier this season I bought a new camera body, a Nikon D5500, which is described in reviews as "entry level". That may be, but it's entry level is definitely higher than the camera it replaces and it was reasonably priced as it has been officially obsoleted by the D5600. I have a 55-300m zoom, decent for close to medium distance shots, but it cannot reach way out so sometimes I have to crop the hell out of distant shots and the quality is compromised. All that said, it is light enough to be easily carried.

Some of my earlier shots were noisy so I have been playing around with settings. As a result I am using aperture priority at about F16 for stationary or slow moving shots, and shutter priority at 1/1000 sec or more for flying shots. Ideally I would change the focus and metering mode for each situation, but there is rarely time, and I am NOT a photographer, so I have come up with compromise settings which work - sort of. :-)

There are a pair of ospreys at the center, sometimes they fly over, usually they don't. Today they did. These are 6 foot pictures, they look okay from 6 feet away, much closer and they get a little fuzzy. 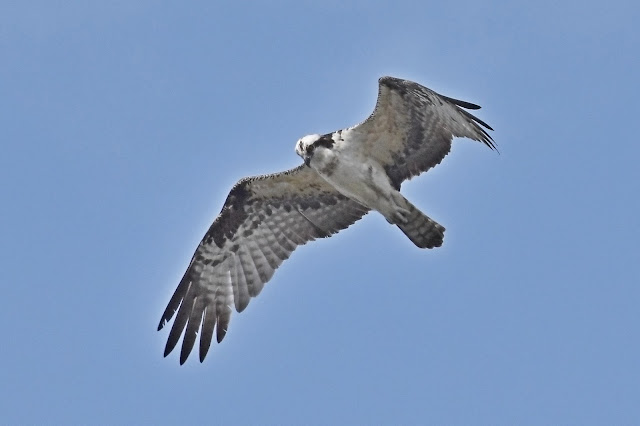 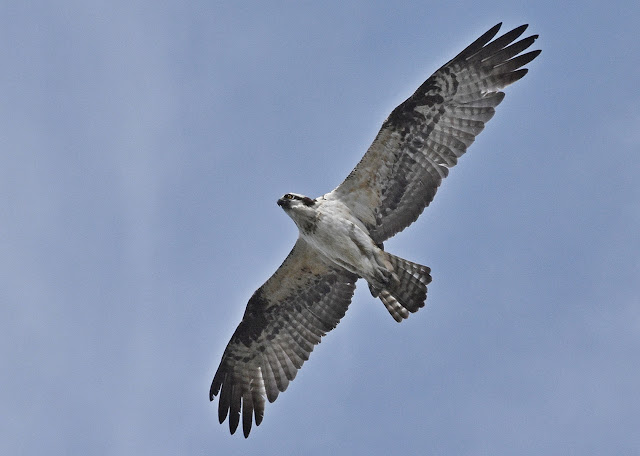