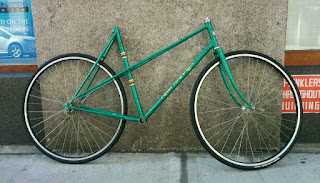 This started out as an unfortunate green bare frame and has been more or less in storage for a few years. I dropped it off with the painter, Jeff Bock when I was picking up another frame. After he resprayed it I built it up mostly with components I had on hand - leftovers from past projects. Junk from the drawers. Some vintage, others vintage in spirit. 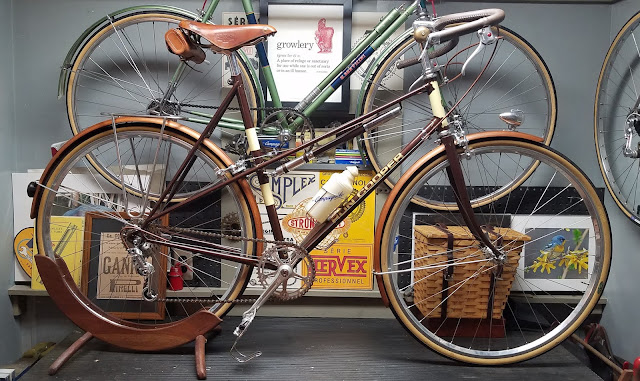 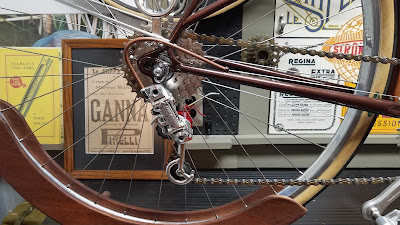 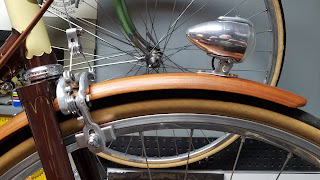 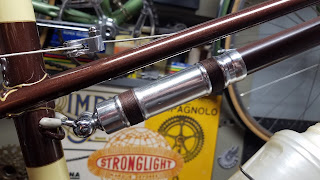 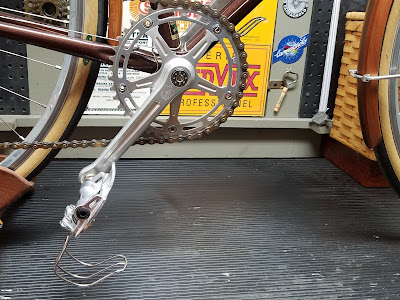 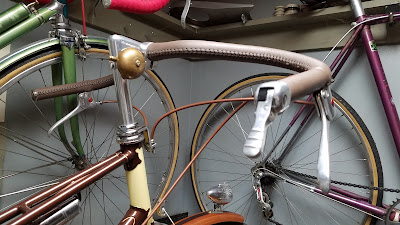 The bars are Nitto Mustache bars with 1 1/2" cut off the ends, then re-bored for the Suntour shifter. They also have a couple of slots cut in them to route the shifter cable inside the bar to clear the brake lever. And of course they are covered with laced leather. (Just a note, lacing leather is surprisingly difficult for a one-eyed man with marginal vision even in the "good" eye.  Not complaining, it just takes way, way longer and there are a couple of errors.)
Here is the end cap on the non-shifter side. It is a domed buffalo nickel, one of 8 from a leather hat band for a Western hat years ago. 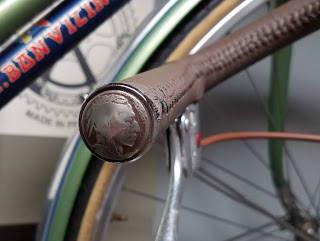 The rear brake straddle cables were an issue. Because the straddle cable had to be longer to clear the seat post they kept disengaging through the assembly slot. I bored the cable puck hole out to accept Mafac straddle clamps. Look and work damned fine I say. 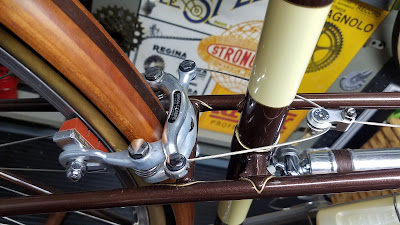 The rear freewheel is the current iteration of the IRD body, but with the older stepped sprockets. 5-speed with 34 big sprocket. Of course the '79 vintage Campy NR derailleur couldn't wrap enough chain for that, so I installed Campy Rally cage plates. Eventually the Regina chain may be replaced by a "modern" chain, but I like the look. 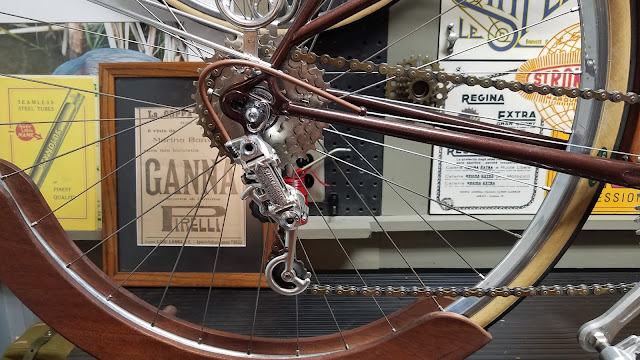 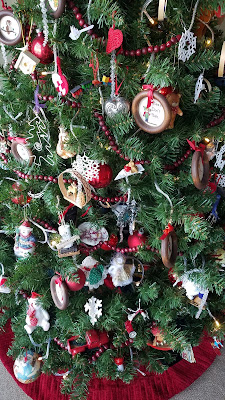 We have a Christmas Tree. With Ornaments. Quite a number of ornaments, most handmade. Lorna has recently been embracing her heritage and is considering going with more of a Danish theme next year. That does not necessarily mean we will not use all of the existing ornaments. She will find room. 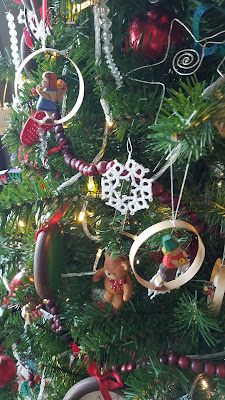 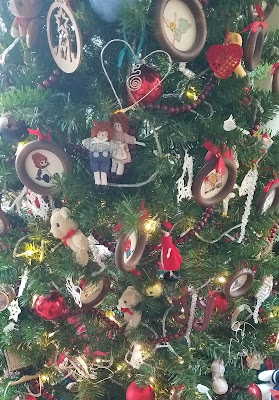 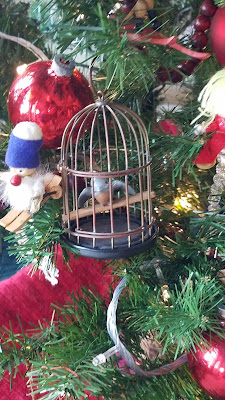 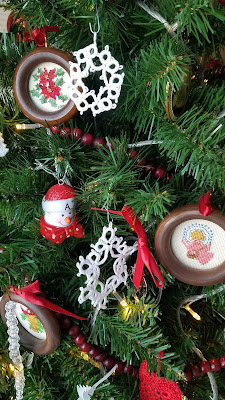 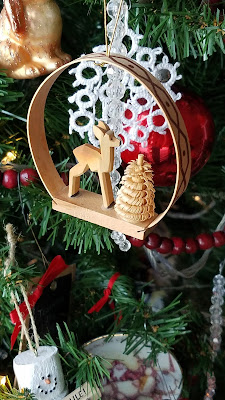 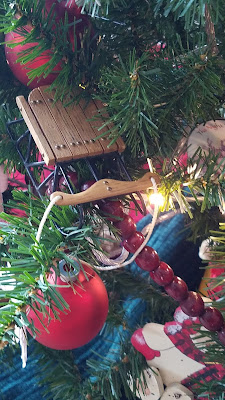 "Twas the night before Christmas..."

Always a difficult time for those among us who live alone - the singles, the childless, those who have no close relatives with whom to spend the holidays. Some will spend Christmas Eve by themselves. This is the story of one of them.
He sits by the fire, sipping hot tea and watching the flames chase and frolic among the logs. At his feet, a warm pile of sleeping cats. Except for the occasional sputter from the fire, it's a silent night. The winter sun is already setting amid a few crimson clouds, leaving a starry indigo sky to the east. His room grows dim, lit only by the dancing orange flames. It's still early - a few more hours must pass before he makes his rounds. Across the room, leaning serenely against the far wall, is a bicycle. Normally it would be stored for the season, waiting patiently for Spring rains to wash away the road salt, but this evening it stands ready for one last ride before it's winter slumber. Headlights are mounted, along with a single red taillight. A thermos full of hot coffee has replaced the water bottles. Tonight will be a special ride - an honor reserved for this bicycle, which has been favored for the past twelve months. 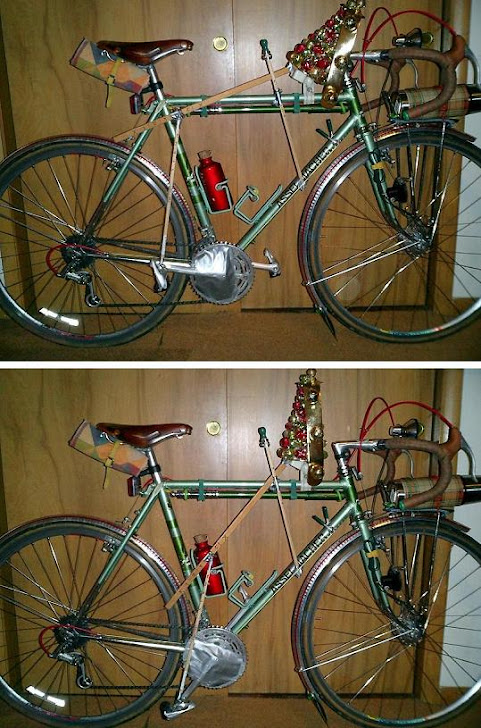 Curious and confusing changes have been made to the bike. The toptube has been wrapped in cloth tape to protect the paint, and over this a split piece of PVC tube has been slipped into place. Twenty-four silver sleigh bells,arranged in three rows of eight, are attached to a strap of leather at each end of which is tied a length of wire. The strap of bells lays over the top tube, hanging down on either side of the frame, and the ends of the wires are attached to the pedal spindles in such a way that, when the crank is turned, the bells are pulled alternately up and down over the PVC sleeve, so that each revolution creates a "jingle-jingle" sound. It's almost 9:30 - the man begins dressing for the ride ahead. Wrapped in several layers of warm wool, he rolls his bicycle out into the chilly night. Lights turned on, leg over the bike, feet into the pedals, and off he goes. First he rides a lap around his neighborhood. His breath turns to frost in the chilly air, but inside his woolen cocoon, smelling slightly of lanolin, he remains cozy and warm. The bells work as planned, jingling with each stroke of the pedals. Most folks are already in for the night, so the roads are silent and empty - there is only the sound of his sleigh bells in the crystalline air. He has lived in this town for many years, and knows it's neighborhoods well. He knows where many of the children live. Passing their homes, he bounces the bicycle up and down a bit to make extra jingling noises, but only colored lights and silence greet him. First loop completed, he turns onto the main road and heads downtown. He has only a few hours to cover all of the little neighborhoods, his small white light guiding him along the darkened streets. During the ride he thinks about his childhood, and all those early Christmas nights when he lay awake, too excited to sleep. He remembers listening as his parents turned-off the television and went to bed. He recalls the low rumbling from the steel mill across town, where the machinery never slept, and the lonely whistle from trains rolling through the farmlands beyond. A sort of panic would build as sleep continued to elude him. He'd toss and turn, wondering what would happen - would he get in trouble if he couldn't sleep all night? And then he'd suddenly awaken on Christmas morning to a world full of magic. Tonight he continues his ride, visiting one neighborhood after another, covering the entire town, the bells jingling all the way. But what if no one else can hear the bells tonight? Perhaps the televisions are still turned on, the kids are up late playing games on their computers, their exhausted parents having surrendered to wishes to open presents early. But perhaps there is one house, one small room, where one child stares wide-eyed into the darkness... one little believer is wishing for sleep to come, wondering perhaps what time Santa will visit, and how He gets down the chimney, and how He manages to cover the entire world in just one night. Perhaps one small soul will think about the glass of milk and the little plate of cookies left on the table by the Christmas tree. And then, perhaps, they'll hear the gentle jingle of bells outside and rush to the window to see a dot of red light disappearing into the distance. And it won't matter if the light is at road level rather than flying up over the rooftops - an amazing site, otherwise inexplicable - not a car taillight or anything like that, bobbing slightly from side to side as it crests the hill and vanishes. It's three hours later, and the rounds have been completed. The bike rests once more against the far wall. The fire is little more than deep red embers. He sits in his chair, three happy cats napping in a pile amid the warm wool. He thinks about this night's work, reflecting on all the Christmas Eves he's spent alone, and probably will continue to spend alone, and how life isn't always what we expect it to be.
And he's only a little surprised to find that, on the table beside him, someone has left a glass of milk and a small plate of cookies.
3 comments: