Ras said, "Did you notice, with all that yelling and dancing he never even took his hands out of his pockets."
3 comments:

One Small Step for Man...

Not that anyone in the world cares but Christy and me, he was able to make it down to the Growlery for the first time since his stroke months ago. He declined the use of my arm and apologized for his cane. I was quite happy to see him. That is about it for today. A very good day.
3 comments: 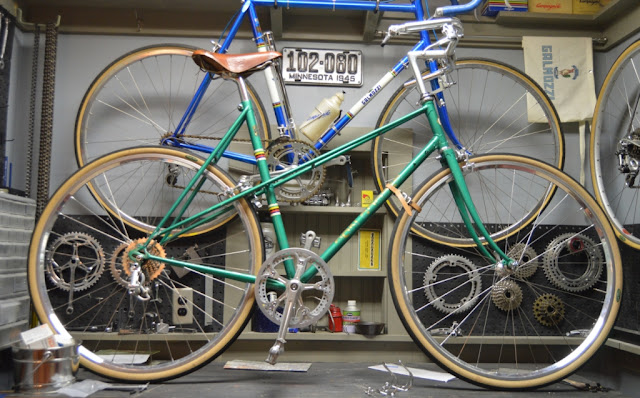 It's coming along pretty fast. The decals arrived from England the other day. I still need hand grips, cables, etc and a way of routing the bar-end shifter cable under, around or through the brake lever. I think I have figured out a way to route it cleanly through the brake lever - a couple of hours with a drill, a round bastard cut file, a Dremel grinder and a medium weight ball pein hammer ought to get the job done. 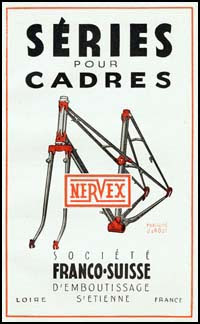 This color looks pretty good in photos, in the flesh it is just, "oh". I like green, I just want a better green. I was going to pick a contrasting color to feature the ornate Nervex lugs and Chris Kvale's painting skills, maybe dark red or yellow, but the Ron Cooper decals that were available are white, so I think a white head tube and a white seat tube panel to visually balance it a little. 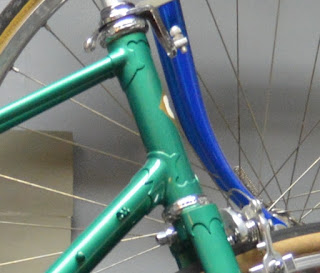 I have changed my mind about paint half a dozen times. Ron Cooper built over 7000 custom bicycle frames and to my knowledge he never painted one with more than one color. If you tell Kvale you want the paint to look like it was new originally, he will ask if you want the orange peel finish, the drips and runs, and crooked decals. People seldom really do. Some might think me a heathen. Why should I corrupt this one with two colors with perfect cut edges? Because we can I guess.

These rebuilds used to be how I managed our Minnesota winter- agonizing over little details for hours, for days, for weeks! If I don't slow down this one it may be rideable before we leave for Texas in January.

I have been dry fitting the  Ron Cooper with parts on hand to see what I have to come up with, It has become obvious that I need a bar stem. My world has mostly involved road bikes. I do not exactly remember where the Nitto stem came from, but it is waaay too long, front to back. If I hope to save my back I need to pull the bars more back in my lap. Other than that and brake levers I am pretty much in good shape.

Okay, let's talk about that paint color again. I was thinking about black, but the ladies rule. Lorna likes the Cinelli green - and I sleep with her. And then Justine played the green poetry card. Green it is. Cinelli green with a yellow head tube and a yellow seat tube panel. You flam red and purple guys can complain all you want, but this is going to be it. 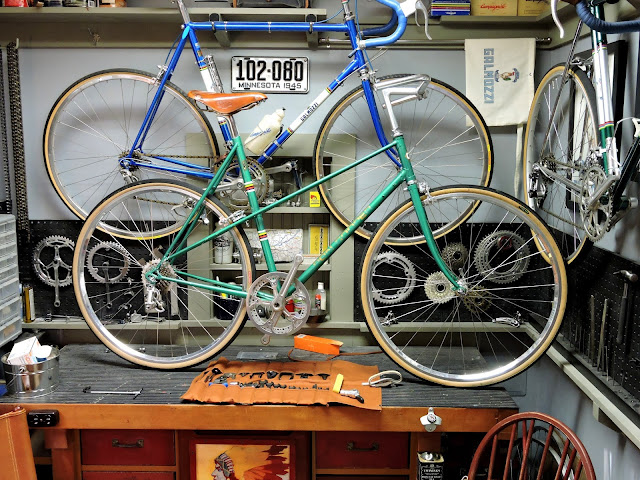 When I shot the picture my wrenches were spread out. I have two sets of wrenches, the wonderful drop forged S-K chromium American made set I inherited from my father-in-law, and a more workman like set of "made in the U.S of A," black oxide wrenches. Inheritances aside, I prefer the black tools that look and feel more like the real tools I grew up with back on the farm. 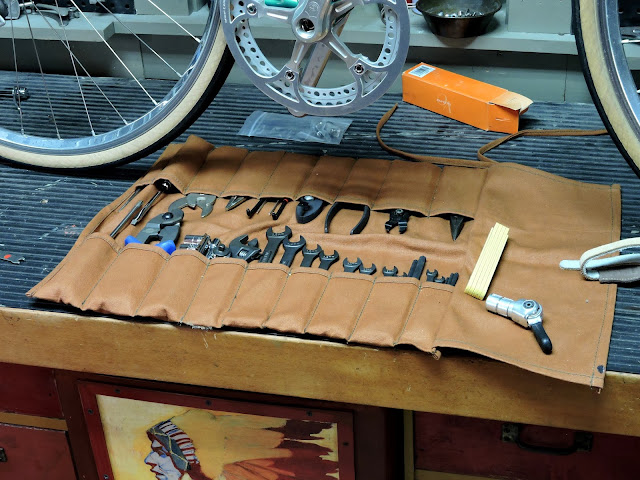 One of the locals slipped away. He was not someone that any of you knew, but he left behind a great obit.

Thomas Desmond Donnelly IV of Geneva died Monday, Oct. 5, 2015.
Tom was born on Oct. 15, 1951, on an island just east of Ireland to Thomas and Elizabeth Donnelly.

He spent his childhood in England, Okinawa and Texas and graduated from Dugway High School in Utah, where he was on the varsity teams for football, basketball and golf. He studied macrobiotic cooking in Boston where he met his future and former wife, Sheila O’Leary. They were married in Donegal, Ireland, in 1975. They later moved to the Blooming Prairie area where they farmed organically with draft horses raising cattle, sheep and chickens.

Tom, or “Digger,” as he was affectionately known, dug graves to the top of his head at 13 different cemeteries.
He was beloved by his many friends and could often be found manning the jukebox at Geneva Bar, opening the ceremonial Guinness to start the weekend at Harmony Park as the mayor, or serving as a mascot for the Minnesota RollerGirls as Tom Tom the Leprechaun.

He was quick witted. One of his favorite retorts to those who asked if he dug graves by hand was no, he used a shovel. He finished the crossword puzzle daily and loved to bird watch.

Tom was small in stature but large in heart.
The family would like to invite all to celebrate his life with a burial at St. Mary’s Cemetery in rural Geneva at 2 p.m. Sunday, followed by food and merriment from 3 to 7 p.m. at Harmony Park.  They also ask those in attendance to wear green, Tom’s favorite color, and come prepared to toast Tom.
1 comment: 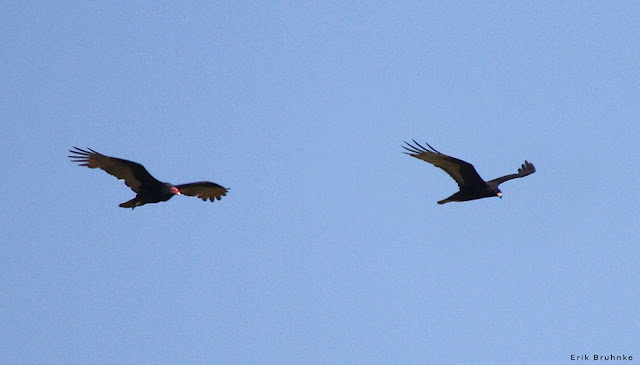 I stole this photo from Erik Bruhnke. (Lorna made him a Minnesota wildrice hotdish down in Texas so he owes me.) His photo shows a Turkey Vulture (L) and a Zone-tailed Hawk (R). Selective evolution can do amazing things. The Zone-tails are the same color as the Turkey Vultures, they hold their wings at a classic Turkey Vulture angle, AND they tend to soar with flocks of vultures, where they can hide in plain sight to sneak up on their prey.
No comments:

This 58cm 1970s(?) Reynolds 531 mixte with Campagnolo dropouts and Nervex lugs is now sitting down in the Growlery. 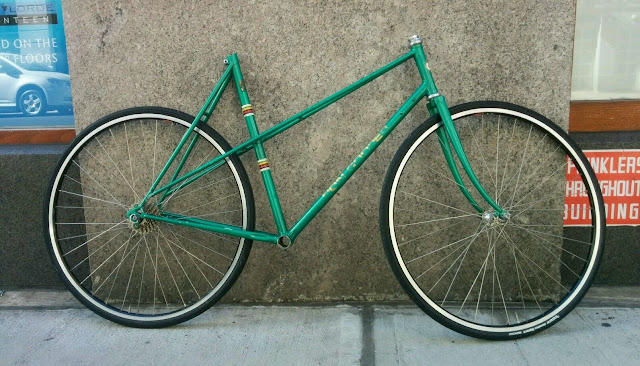 The decals are obviously virtually gone. I have replacements on the way from Jolly Olde England, although with white lettering. The paint is not as good as it photographs, just little nicks and scrapes, but am not crazy about the color anyway. I was thinking about jet black, or another dark color.

Any thoughts or opinions would be welcome. (And likely ignored.)