Nothing rare, nothing unusual, no great photos - just a record of the early migrants passing through our garden. 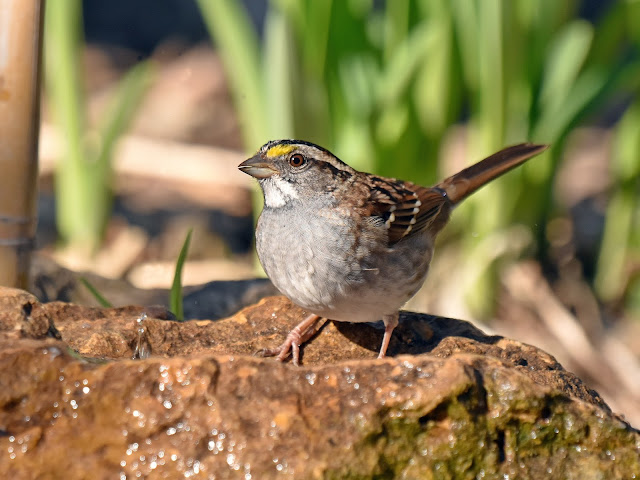 It is a little early for Warblers right now, though I believe Lorna got a nice shot of a Yellow-Rumped perched on the drip. I photographed my first of year White-throated Sparrow yesterday, the Chipping Sparrows have arrived and there is still a single lingering Dark-eyed Junco. Also, there is an Eastern Phoebe - hope it stays. That varies year to year. Oh, and the Wood ducks are back. Just one or two pairs. Not as many as the past couple of years. Maybe just a little late? Or they were shotgunned?


But yesterday the real show was Ruby-crowned Kinglets, so that is what I focused on - so to speak. They are small, twitchy and can be difficult. Mostly they seemed to be in the evergreens right beside me, impossible to photograph, but it was nice to get so many good looks at them in the open. I did not catch one flashing up his little ruby flare. That is more of a breeding territorial thing, not something to be wasted in migration. They are in transit, just passing through. Oakwood is a motel stop on the highway to northern Minnesota or more likely Canada. 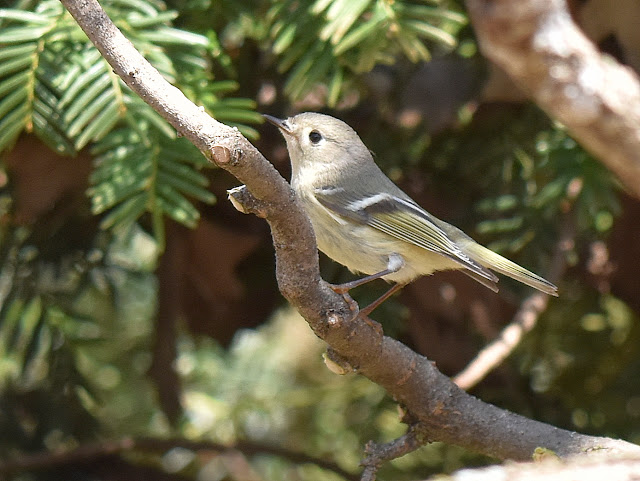 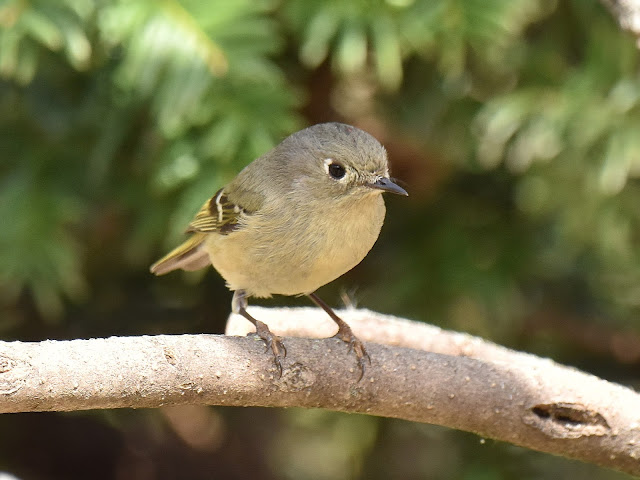 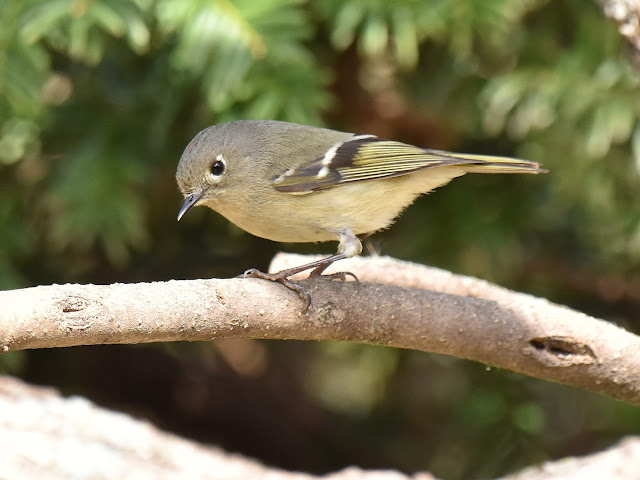 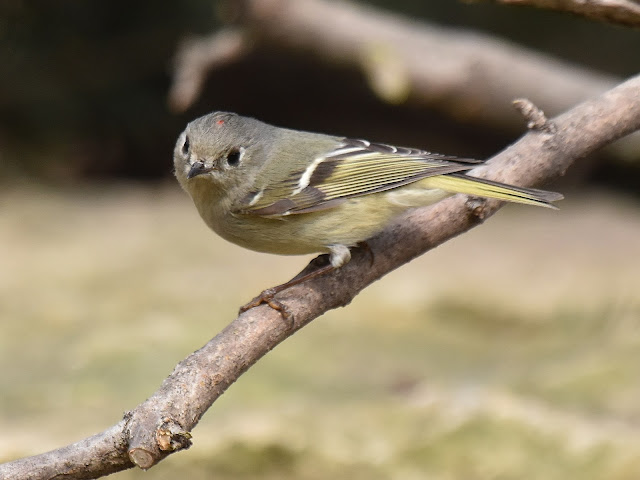 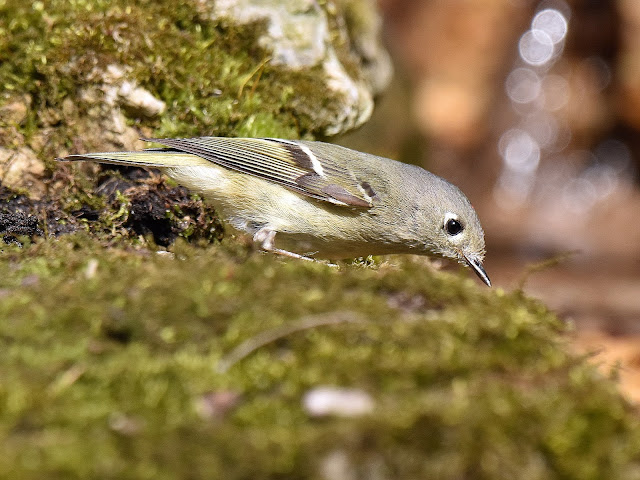 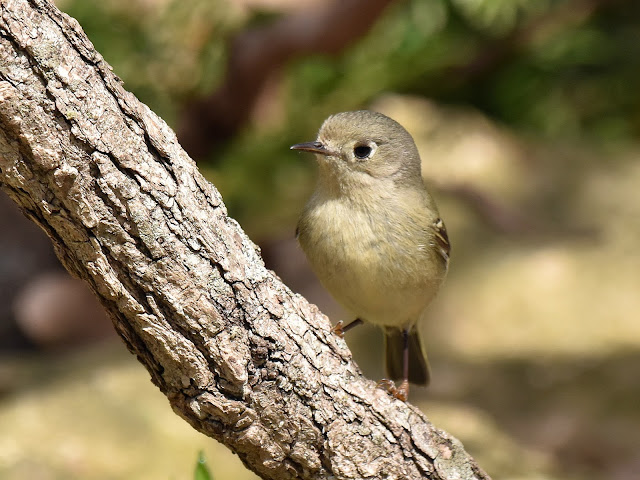 Gustavo Salmon created the decal set from the degraded decals and details from the headtube badge. Twice.  First when I thought the graphics had been black and silver. Then another set after we discovered those were degraded from red, blue and gold.

To say Jeffrey Bock "touched up" the blue panel paint may be the understatement of the decade. He mixed a match for the existing translucent blue panel and went into the paint booth with two air brushes, blue in one hand and clear in the other. Blending them as he sprayed, he repaired the faded and gouged paint and blended it into the existing paint. The end 1 1/2" of the downtube panel and most of the seat tube panel are still original paint. There was a dark thin "ghost" at the ends of the panels where we surmised there had been a "world stripes" transfer that Galmozzi favored. After applying the decals Jeff went back over the panels with a soft clearcoat, matching the sheen of the existing green paint. 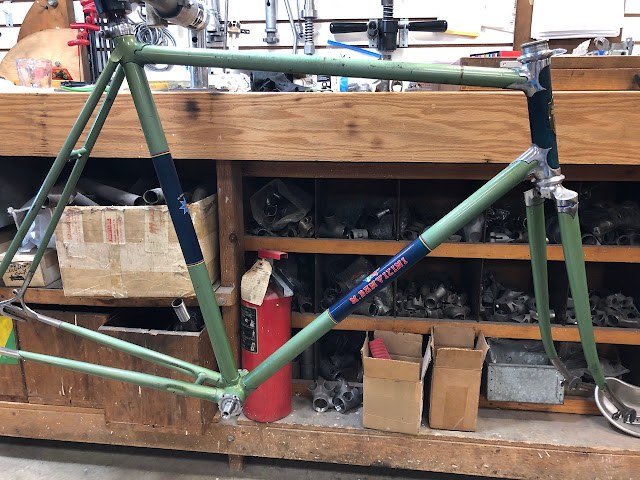 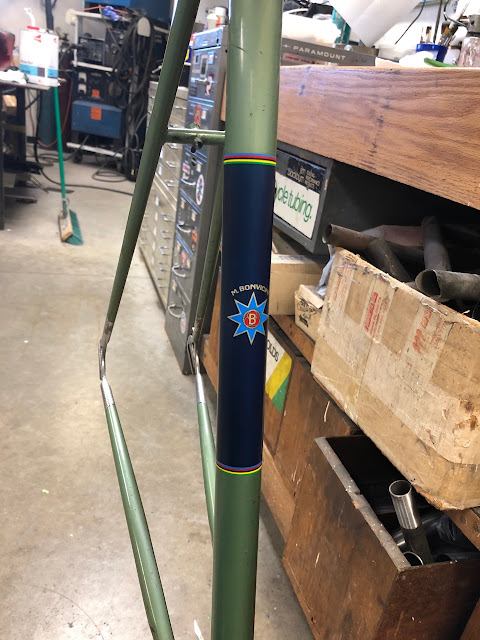 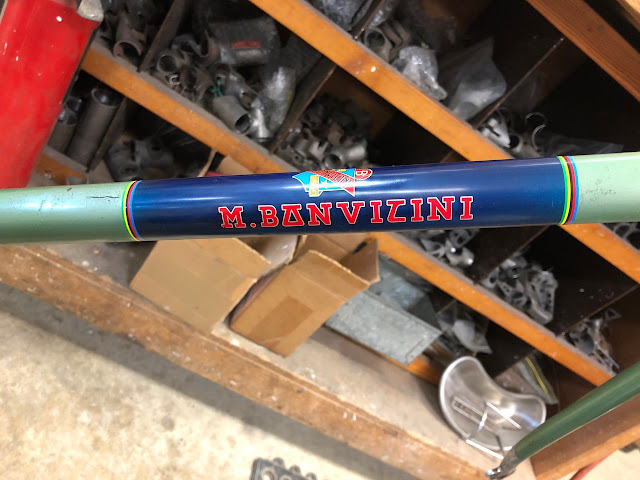 The bicycle came to me with a small front stub fender. The remaining fenders were left in an Italian garage or barn decades ago. The fenders are Honjo reproductions with the same profile and Italian style wishbone stays. Jeff Bock blended three green paints to achieve the match to the frame paint - an interesting task, as the original green has faded to different tones all over the frame. So he was matching to an average? 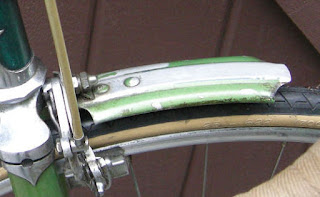 It does not show well in this photo, but there are faded sections of a blue pinstripe. Matching that stub fender, John Parker will paint a blue pinstripe at the color break. In this day and age how many people have the skillset to paint a thin curving pinstripe freehand? After Parker  finished, Jeff applied a crest decal on the rear fender in the same location as the vintage Cinelli fenders, which were our only frame of reference. 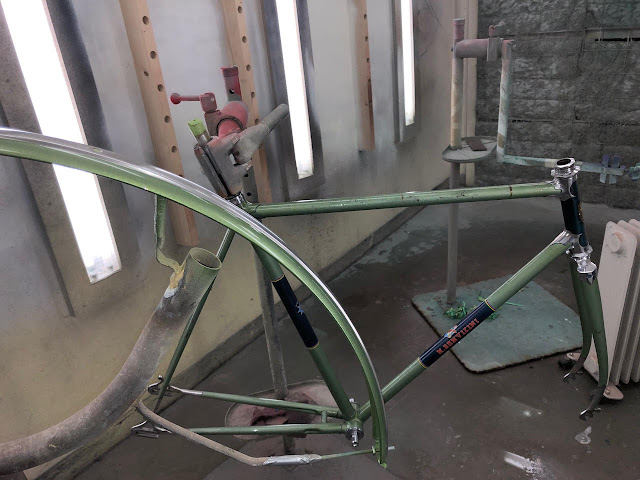 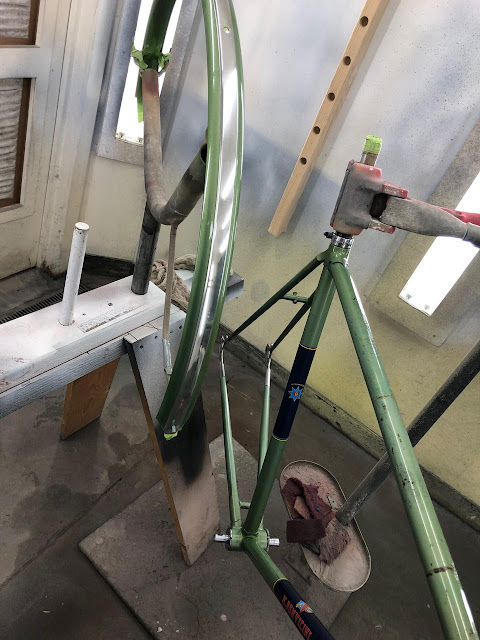 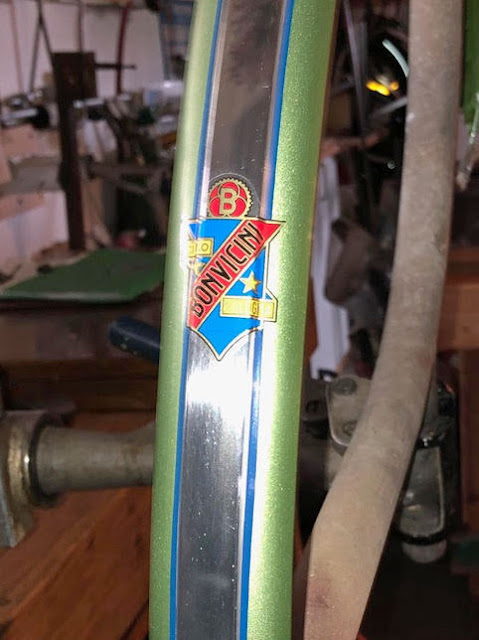 I'm cleaning and polishing wheels, brakesets, pedals, etc. We are getting closer.

How sticky was this snow? It sticks to bicycle spokes. 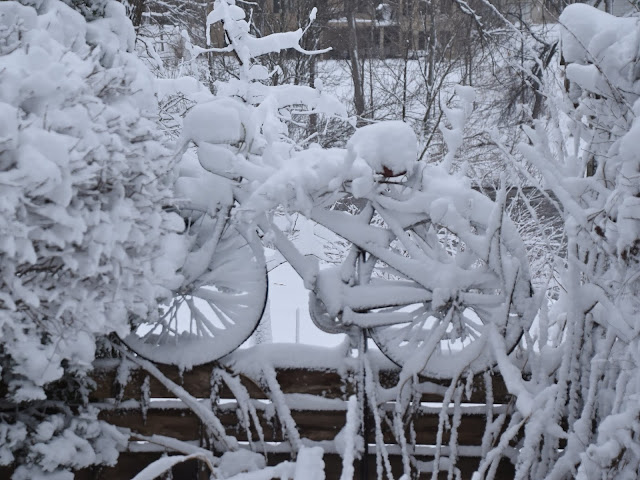 Our stream and little waterfall are still flowing, but I fear for the shrubs. I shook the snow off of some, but it clings to the evergreens, particularly the Arborvitae. Why did I plant Arborvitae? Because it was give-away end of the season cheap 30 years ago at Walmart. Now it is a monster hedge defending us against Judy and Christy next door. They are older and Christy is armed. God only knows what havoc he could wreak on us without that hedge. They are still in Texas ... and I worry. But back to the snow. 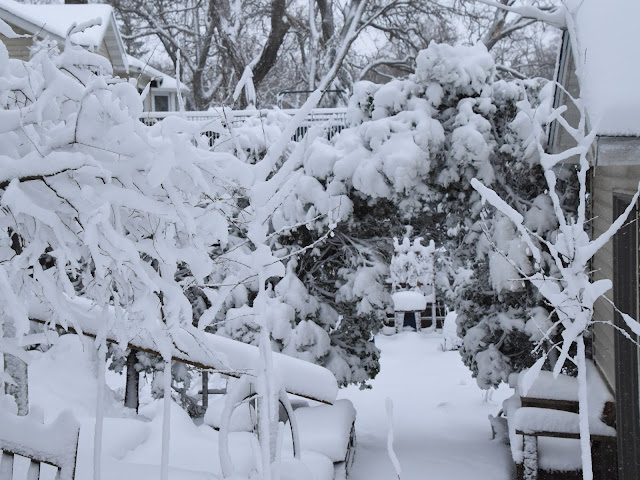 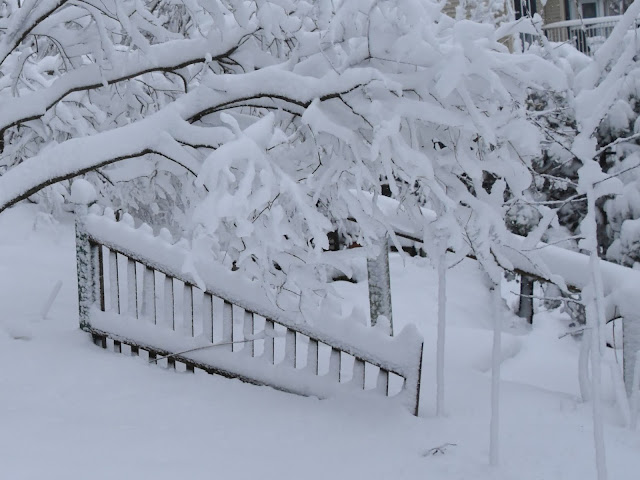 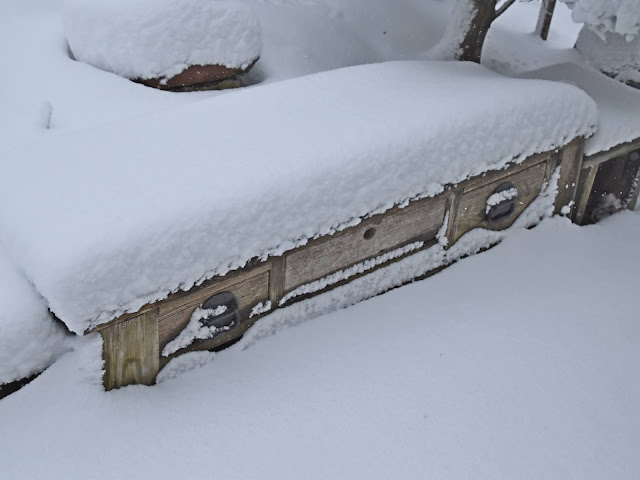 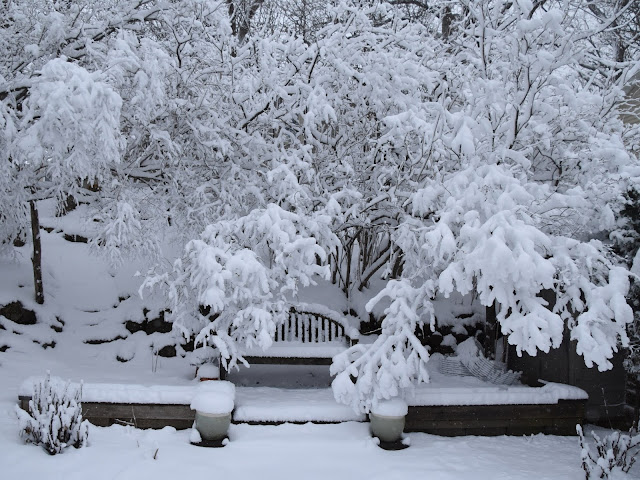 The return of Minnesota from the dead. It started out innocently. I was at window commenting on how beautiful it all was - the steel gray of the lake, off-white sky, the charcoal dark trees edged in snow. The Woman said, "Well, it isn't my favorite color scheme. 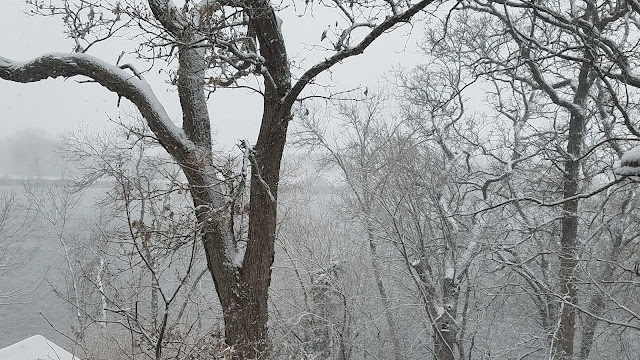 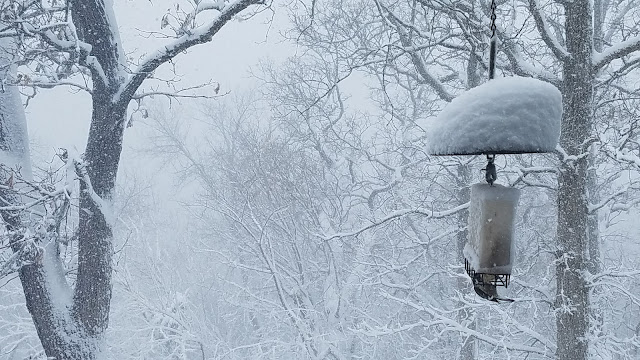 Below, from our bedroom deck:
Somewhere under all this is our stream (in black), still flowing. 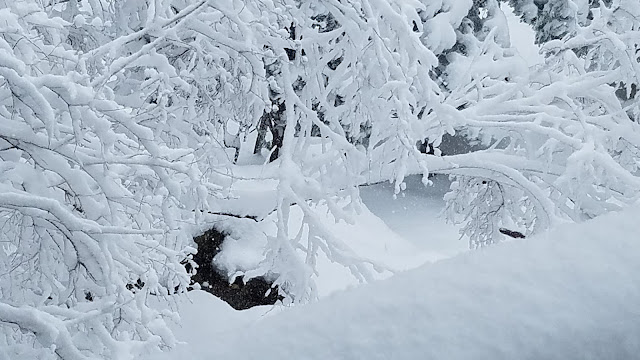 Still coming down, but it is shovel time now - Gunnar

A Drip For the Boids.

This rock with a hollow, a vaguely squarish little dish, has been staring at me for a couple of years. 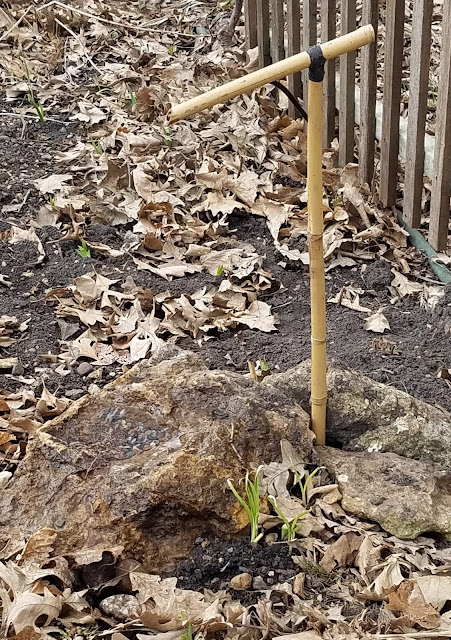 Now half of the boulder is underground. It is quite heavy. I know this because I dug a hole, lugged the rock down the hill, dropped it in the hole, and lifted, twisted and jockeyed it until the cavity was on the top and it "looked right". A little tired, I sat on the bench to catch my breath and admire my handiwork. And realized that it could not be seen from the end of the bench where Lorna usually sits. So I grabbed the spade and did it all again.

Yesterday I removed the nodule barriers in a couple of lengths of bamboo, turning them into pipes. Think about that process for a while - easier said than done. Then, after a little notching, drilling, I lashed them together with waxed cord. I fished 1/4" tubing through the tubes and oblong holes cut in the  pipes.

After I anchored the bottom of the pipe assembly in the ground, propped by a couple rocks, I plugged the end of the tubing to a water source. I adjusted the flow is as low as possible, which gives me a steady trickle.

Will small birds like a one-bird bathtub with shower? Actually use it? I do not know. I like it and after plants and moss have grown in, it will look like it has been there for decades. I like aged gardens that do not appear new, neat or too "tended".

Back Home in Minnesota 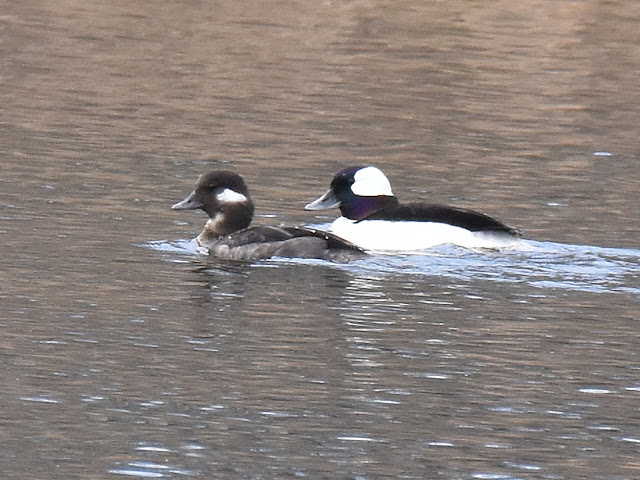 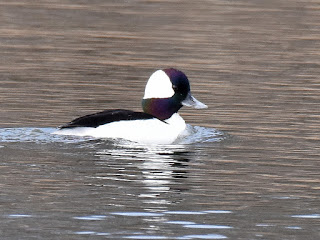 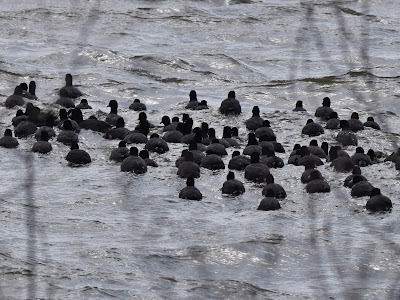 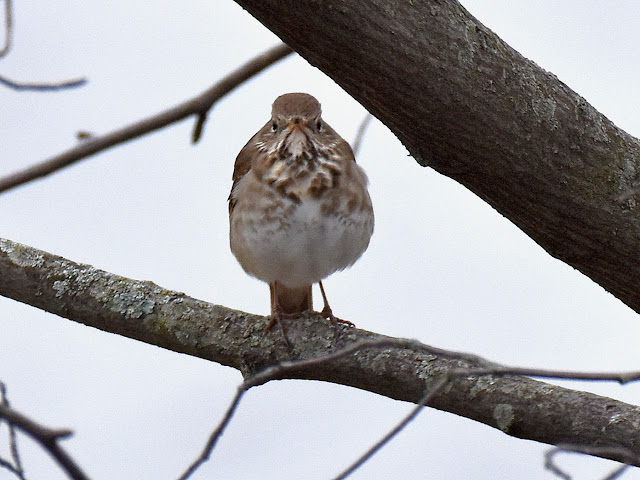