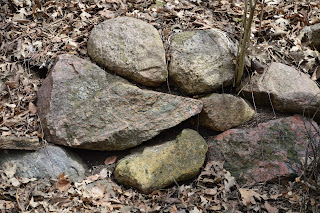 First, the boulders. 25 or 30 years I took it upon myself to rebuild a rock retaining wall on the slope down to the garden. Over time I put a bench guarded by a pair of huge Hosta in front of the wall and the wall disappeared. So here is a shot before the Hostas bury it. 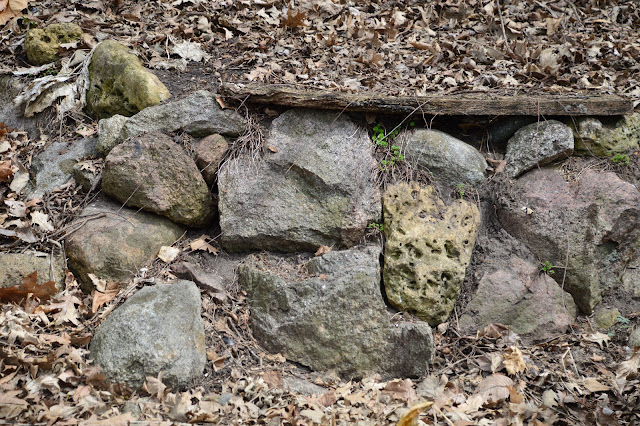 Now today's birds. First the Ruby-crowned Kinglets. I never did get a Golden-crowned or a Ruby-crowned showing the red crown feathers. 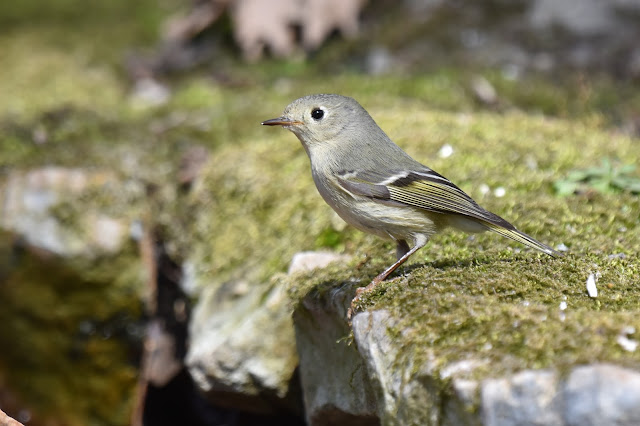 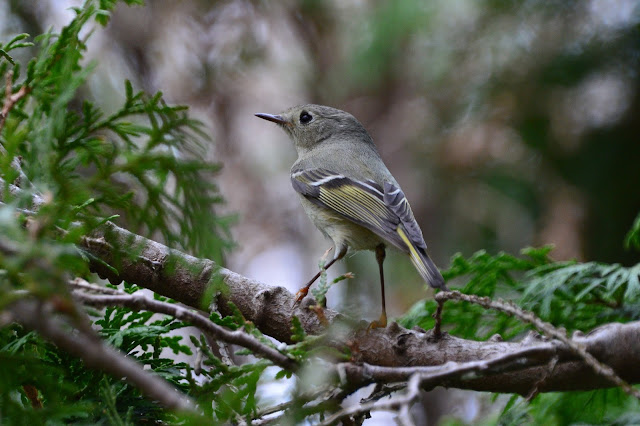 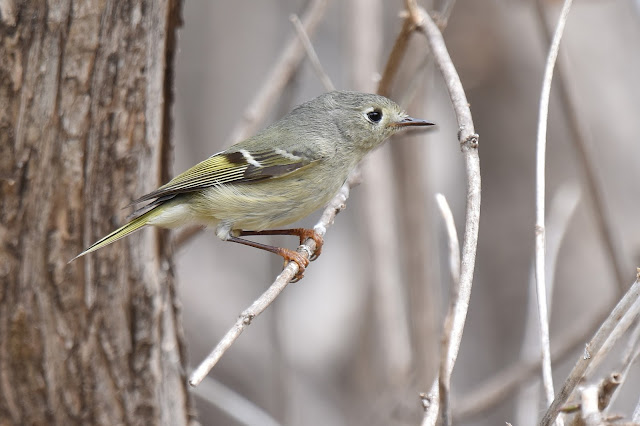 Then a couple of local birds. House Finches and Cardinals. 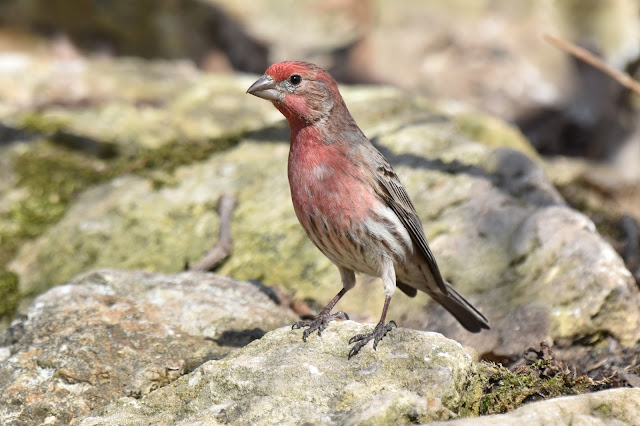 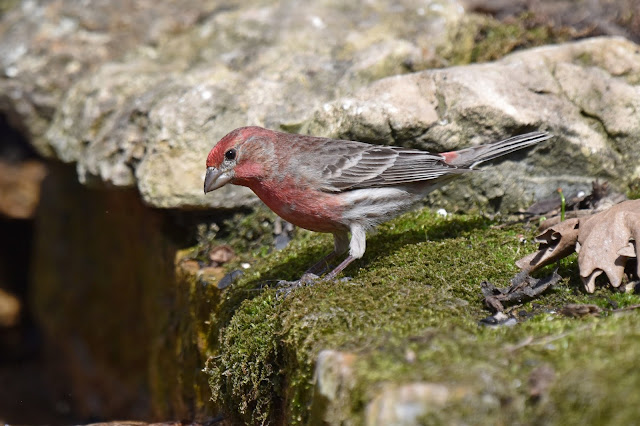 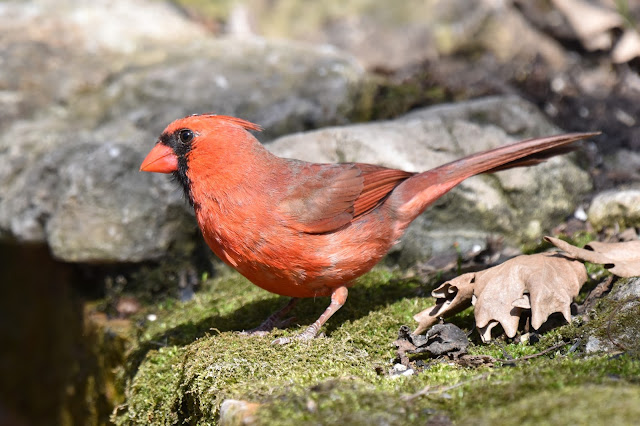 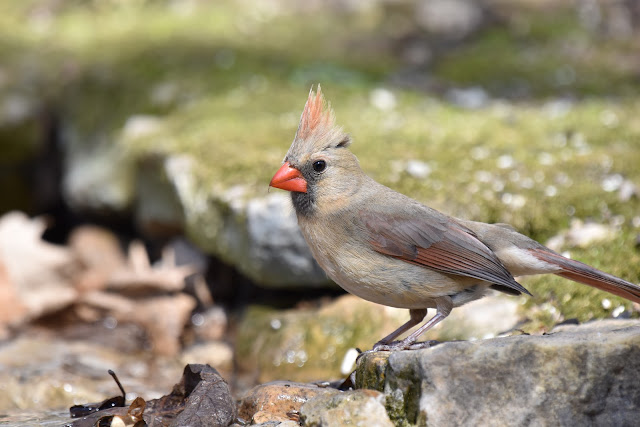 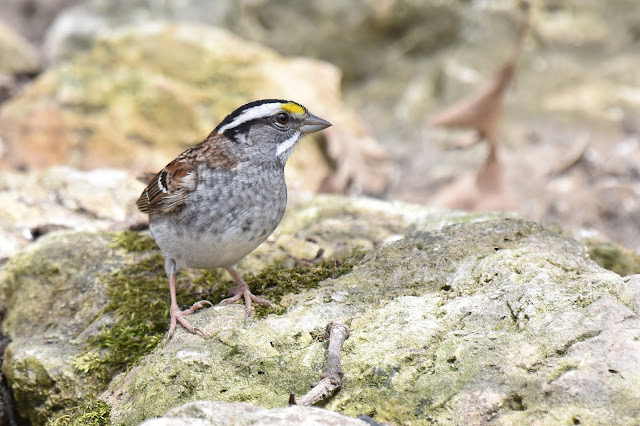 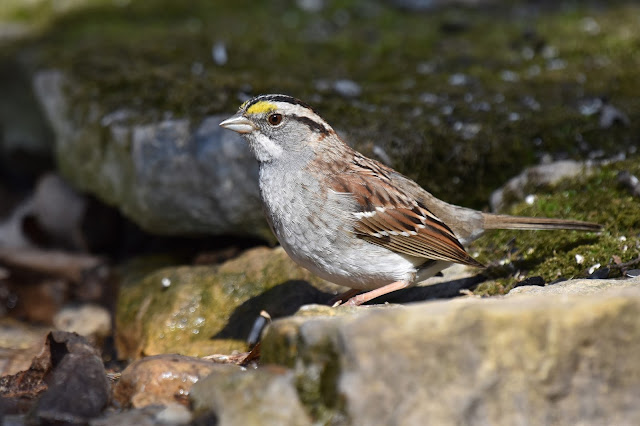 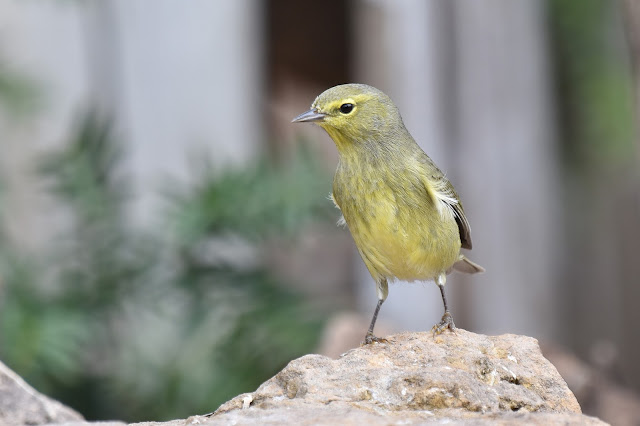 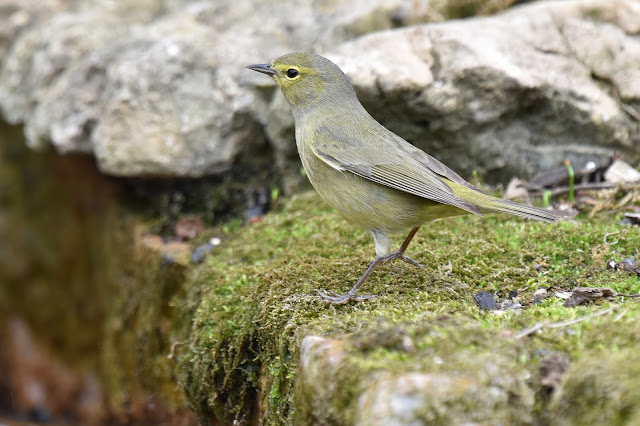 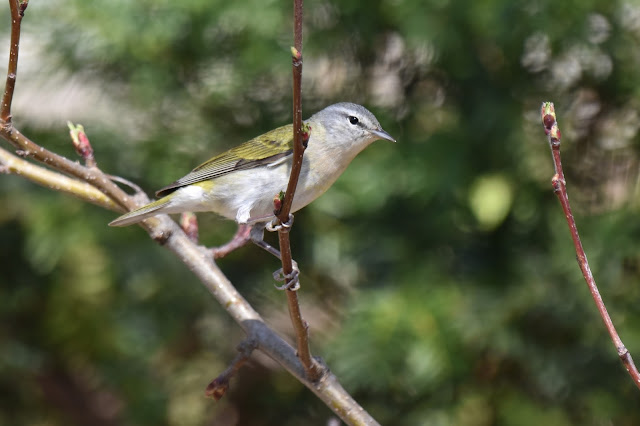 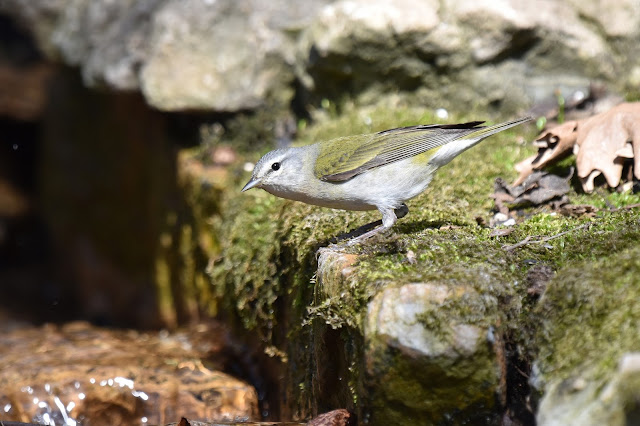 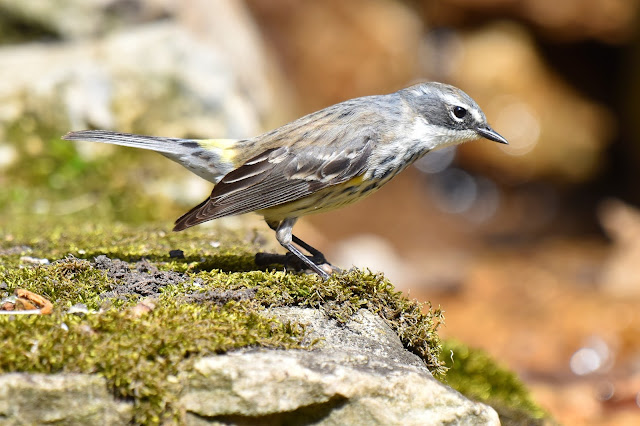 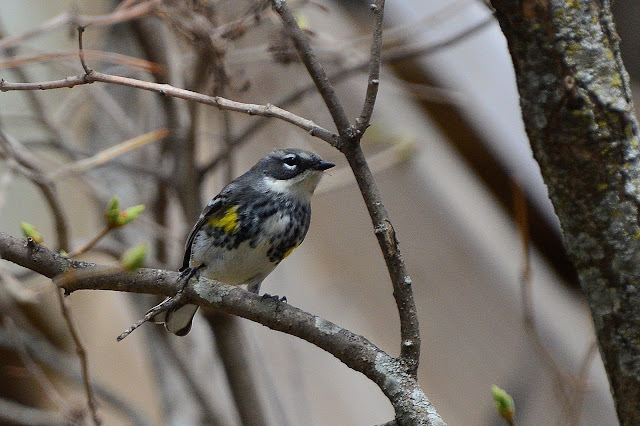 There was also a Palm Warbler and a Nashville, but my photos were quite poor. -Gunnar
No comments:

Today was our first Warblers of the Spring - a Black and White Warbler, which I think Lorna got photos of, and the Orange-crowned Warbler. This was a little surprising, as we generally expect the Yellow-rumped Warblers to be the first to arrive. The Warblers are all insect eaters. Maybe they were ambushed by the weather? An odd year.

The Orange-crowned Warbler is a rather drab Warbler - no wing-bars, no markings to speak of, and I have only seen the "orange crown" when it is in a birdbath in Texas where they winter. 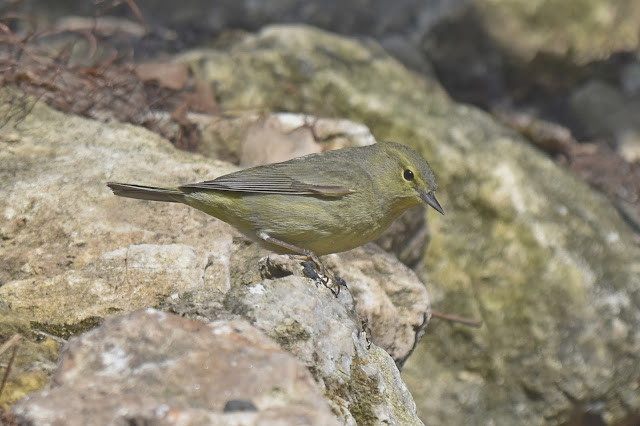 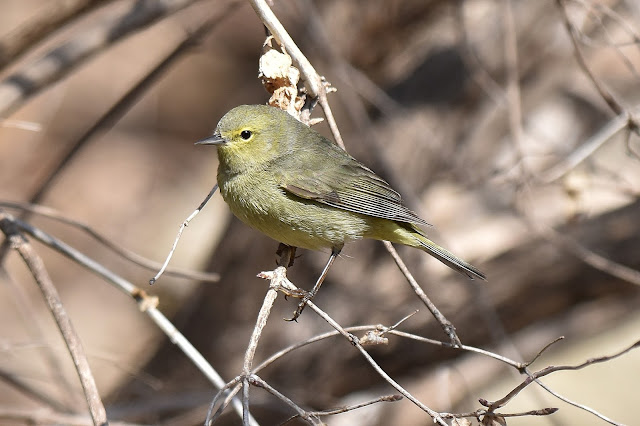 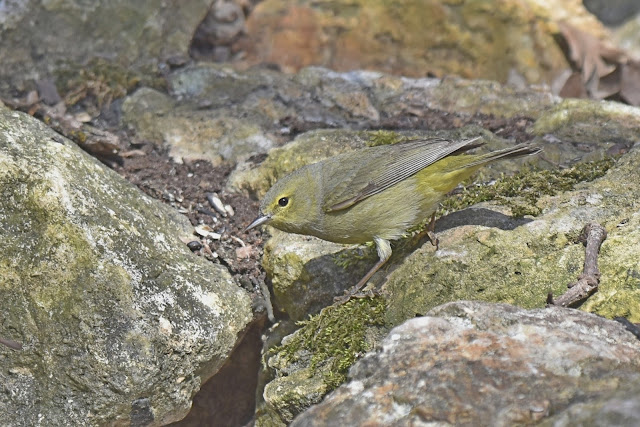 The other migrators today were not Warblers, but a Kinglets, tiny birds, Golden-crowned and Ruby-crowned. Lorna got pics of a Golden-crowned Kinglet earlier. I did not. Again, Lorna managed to get photos of the Ruby-crowned head tuft flaring, but I didn't. The male generally doesn't his ruby red tuft up except when confronting other males or just showing off for a female.

I just didn't catch a good photo. They are small and never stop moving. My poses were all either not quite in focus, or awkward and non-typical poses. My best picture of the day was probably that ass-end shot. *sigh* 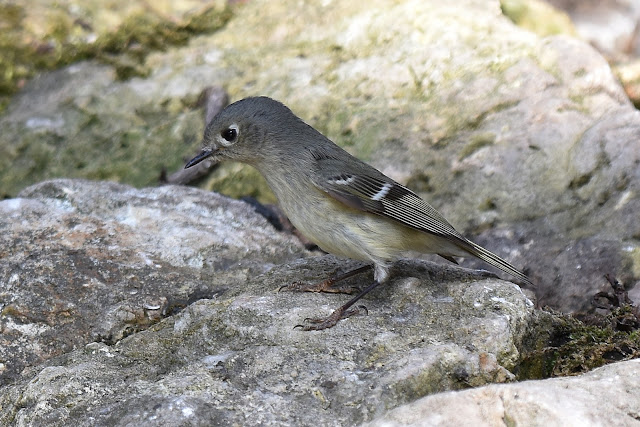 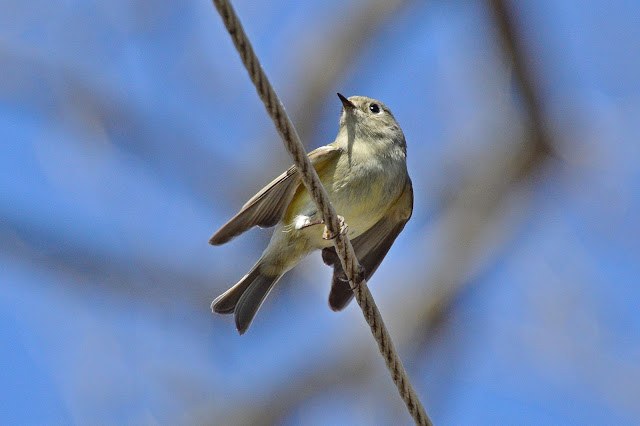 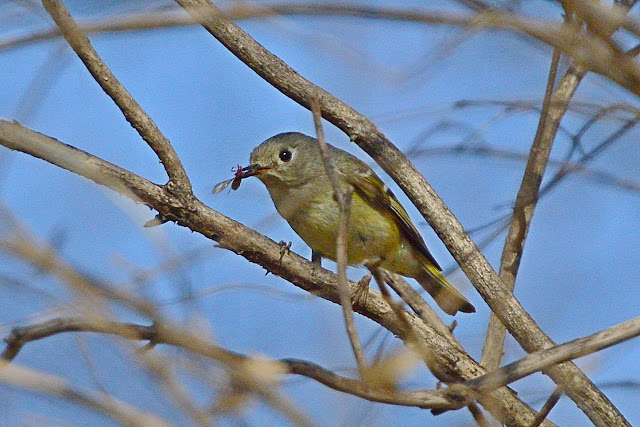 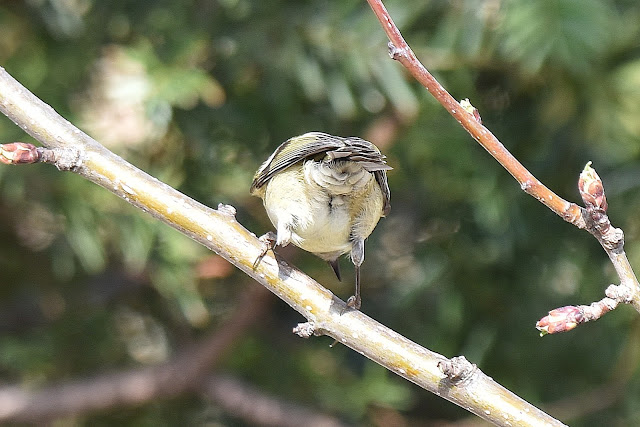 Let's just chalk this off to a practice round for the real show in a couple of weeks. - Gunnar
1 comment:

I have ownership in this food heating device. 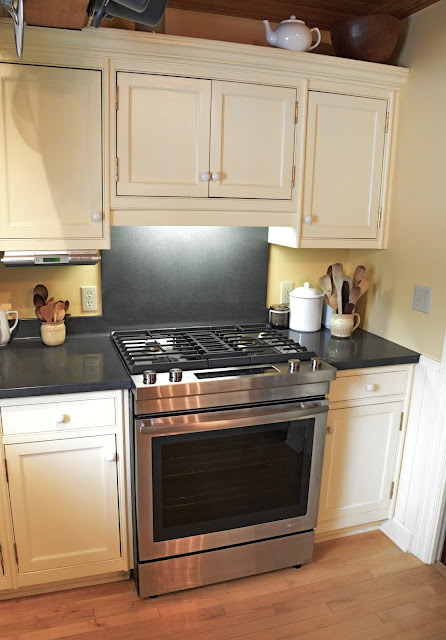 It started with a leaky faucet in the bathroom. Let the refurbishing begin. Bathroom and kitchen.  And let's have it done while we are south over winter. Eventually we blew through $20,000. Included in the project(s) were two rooms of faucets, sinks, plumbing, lighting, painting, a lot of miscellaneous, and solid-surface countertops. But not a stove.

Our stove was a downdraft vented, dual-fuel range (gas top burners/electric convection oven), a little dated looking, but very functional. While we were in Texas work went on. In the process of lifting the oven out to install countertops and re-installing the oven, "something" happened. We returned from Texas to a beautiful kitchen. But the downdraft venting didn't work. I cannot tell you how many times the fellow returned to fix it. Eventually we figured out it was just this complicated 3-function switch. We found out this was a special switch, not available anywhere since 2015. In the world. People buy whole old Jenn-Air ranges on eBay just to harvest the switch. But what the hell, our range was 22 years old, we would just replace it with a new range. Just pop out the old range and plug in a new one.

Then it got ugly. Nothing fit; all the venting needed to be redone, the new range wouldn't fit the hole in the brand new countertop, the gas line was in the way, the venting all needed to be redone. Nothing fit. After much cutting, grinding, belt sanding, eventually the range fit the hole in the top. Then began hours of professionals laying on the floor, poking, grunting, swearing. As they left I overheard one to the other, "If my wife ever wants one of those fuckin stoves, you just shoot me."

Then this morning it was me on the floor, fighting to get the electronics for the vent fan hooked up. The instructions looked so easy. It wasn't. Eventually I went down to the basement and threw the breaker. We had won. 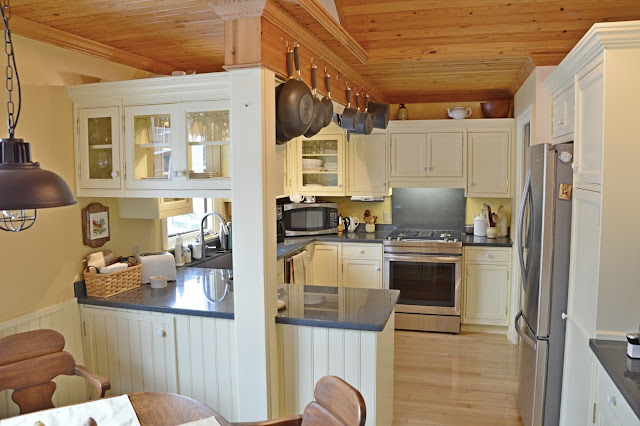 So pardon me for sharing pictures of our god-damned stove. It looks so innocent. - Gunnar
4 comments:

"I am not going to whine about another foot of snow, the second storm in two weeks!" he whined.  It is Minnesota. It's climate change. It is our new reality. Get over it, pick up your shovel and get to work.

Everyone copes in their own way.
We had dinner reservations with Barbara and her cousin Kjell at Crescendo, a local restaurant. Kjell visits from Norway once a year and I am likely the only local man he knows. If the restaurant was open, cancelling was not an option. They were open, which surprised me a little because by that time I-90 had been closed to the west. (You know you are in the Northland when there are entrance gates to close the Interstate on-ramps.) In the words of J.F. this late season storm was "a real calf killer".

On the way to Crescendo we passed a fellow jogging around the lake with his dog. Both coping, not letting a blizzard come between them and their daily run.

I could not say Crescendo's was crowded, but there were a number of tables of diners. It is a small town. People know each other. The conversations sometimes migrated to other tables. People got up and came over to talk. The entire room sang Happy Birthday twice for different celebrators. Badly, but with much gusto. The lone out-of-town traveler at the table behind us seemed more than a little bemused.

This morning, the Juncos are still outside the living room window. I scraped the snow off the table  and threw down a bag of small birdseed, They were eating whatever was on or under the table. I think there may have been fewer birds than yesterday, but still quite a flock. 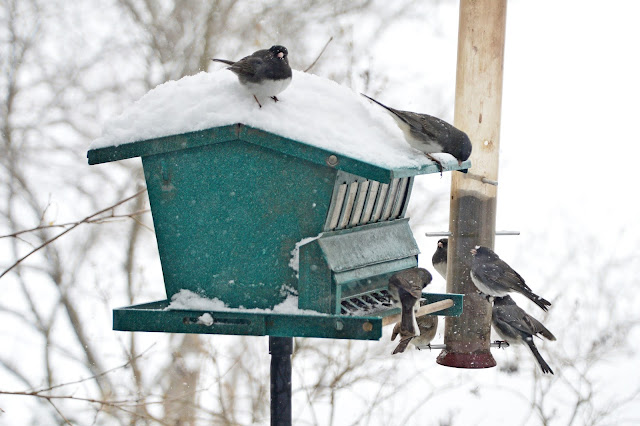 Everyone copes in their own way.
I shoveled a little. Snow shoveling time is like lawn mowing time. It is a time for thinking. And remembering. In this case remembering back to a really bad winter when I was about 12 years old. I had shoveled our walk and the neighbor's, and was back in front of the television (black and white snow with rolling bars). The neighbor next door, P.C. Sorenson, was shoveling his driveway. P.C. was a mover and shaker in our little village - he had been a farmer, but also president of the bank and president-of-the-board of a number of local businesses. He could have paid to have someone shovel his driveway, but he was an old Dane. He didn't get rich throwing his money away. He     shoveled.

Through the window, I glimpsed a shape dropping down. I assumed P.C. had slipped and fallen, but he didn't get up. I ran out to see if he was okay. He wasn't. I called out to Sprankle, the preacher across the street who was also out shoveling. He came running over over and together we tried to get P.C. into the house. He was dead weight. Dead. Weight. Eventually we called the cafe up the street and got help to get him into the house. P.C.'s wife Enola had called the ambulance. P.C. was laid out on the living room floor. Enola put blankets over him because he was cold and she kept wondering what was taking the ambulance so long. I was 12. I knew there was no hurry for an ambulance ... and I knew why Pete was cold.

Today I was exhausted from shoveling the heavy snow. Catching my breathe, I leaned on my shovel remembering P.C. Sorenson. Pete was the first person I saw die - a milestone of sorts. At at the time he died he seemed very old to me, probably even 75 years. I will be 73 in a month.

I took a break.

Coping in my own way - Gunnar
6 comments: