Some would say this is Edgewater Bay. They are misguided and obviously do not live in Oakwood. The ice has come and gone a couple of times this year as the temperature has fluctuated. I suspect it will stay now and in January it will be a foot thick and the ice fisherman will be driving their trucks and setting up fish-houses on it. For now it is just a crystal skin on the water. There was no wind on Thanksgiving when the ice set up so it is as smooth as glass except for crystal etchings where droplets fell from the branches. 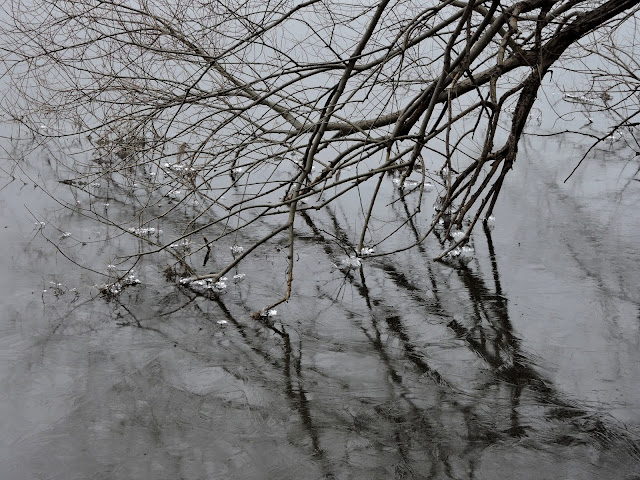 Earlier to day I was checking out the frozen garden.

Okay, I wasn't looking at the garden, I had stepped out of the Growlery to take a good healthy outdoor piss. (This always seems to offend Lorna, but I suspect it is simply jealousy of male convenience.) Off to the south the crows were raising hell about something. I zipped up and walked down toward the lake to see what their issue was, suspecting some poor owl being mobbed. The Great Horned Owls pick off a crow now and then for a night lunch. The crows know this; they remember, they harbor 100,000 years of memory of bloody night raids, and they scream, "Murderer!" at any owl daring to show it's face in daylight. 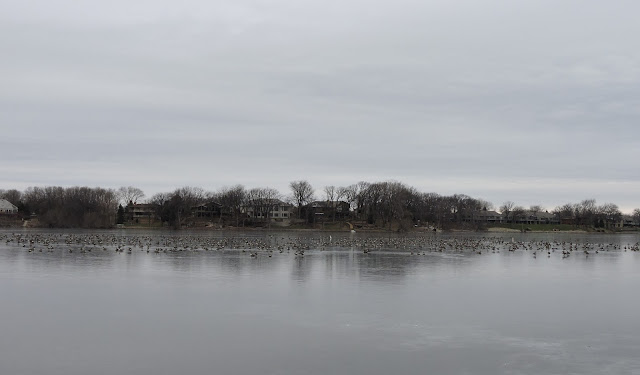 But it was not an owl, it was a mature Bald Eagle flying a bombing run over the lake to check on the health and fitness of the hundred or two Canada Geese camped out on the ice. Not evil, just keeping their gene pool strong. Very cool to watch. 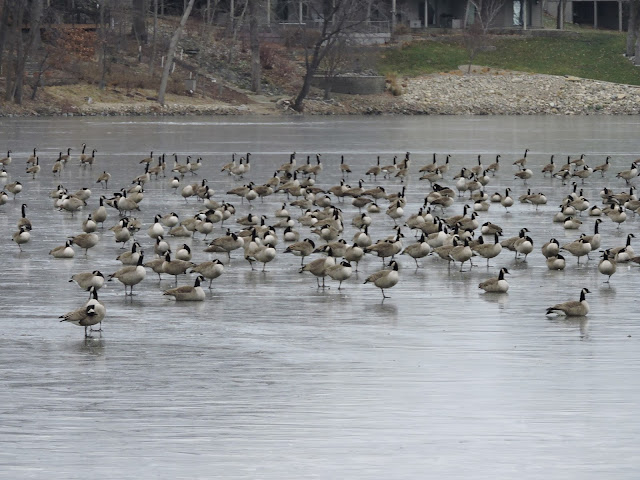 The Eagle nests a quarter mile to the north end of Edgewater  Oakwood Bay. I don't know if eagles kill crows, but given the chance they damned well would like to eat a goose. And, like the crows, the geese know this, and the 200+/- geese were trumpeting their displeasure at that Eagle in their airspace. Everyone is dissatisfied with their spot, their link, in the food chain I suppose. Anyway, it was a loud, magnificent chorus.

That's all I have, except to say that Thanksgiving was fine again  - 24 people this year, adding more people every year.

Parr is playing the St. Mane in Lanesboro next weekend. Got our tickets. .... actually I lost the tickets, but they said I don't need the tickets 'cause they know I am old and forgetful.

I am solo in Albert Lea this weekend - except my friend Laurie Sather and I went out for dinner last night, and I am meeting L.P. for breakfast tomorrow - and John Rust was over today. Anyway, I guess "solo" really means I am sleeping alone. Lorna and her yoga retreat friends are in Lanesboro. Our cottage is full of women ... and I was not invited. She called me yesterday because "the toilet exploded" and I should come over and deal with it. It seemed that "exploded" may have been an exaggeration, but nevertheless I "dealt with it" with a phone call to one of our Lanesboro neighbors who is a plumbing contractor. The ladies now have a shiny new Kohler stool to sit on.

Today Lorna called again. They checked the internet last night to see if the Village Hall was open. It was, at least theoretically. When they arrived there was another couple waiting to be served, but no one seemed to be around to serve them. Taking charge of the situation they served a round of beer to the other couple, then picked out a bottle of nice red wine for themselves.

Only then did they call the proprietor to advise him of his new serve yourself open door policy.


Barbara tending the bar - Jane pouring the wine. I realize Lanesboro is a small town and the tourists have left for the season, but this self-service bar thing may be pushing it a little.

"Foodies" are generally portrayed as being young affluent hipsters. No one would accuse me or most of the locals of being young. Or hipsters. Or even particularly affluent. But I do love good local food prepared with care. From a recent outgoing email:

"Yesterday morning I walked down to the Pastry Shoppe for breakfast. It was early, midweek and only Brett working. I fetched my own coffee, sat down with John Tuck, and hollered to Brett to just cook whatever he wanted to make, a ploy which has proven a winner in the past. Shortly he set a steak and eggs breakfast in front of me. This is not something I would normally order; heavy, two eggs is a lot and breakfast steaks tend to be pretty bad. This one was about 3" x 8" and 1/2" thick. Amazing piece of meat. Where the hell? How? He said the eggs were from an Amish farm - usually fresh daily and the steak was prime sirloin. "It's the only beef I buy." ??? I said, "What about the hamburgers?" (which I have never ordered because the other stuff is so good). "I just grind up sirloin." By then Lorna had come in and he was telling her about what he had put in the chili for the noon special. Cooked it the day before and again when he came in early to bake. I asked. Yep, he puts ground sirloin in chili." 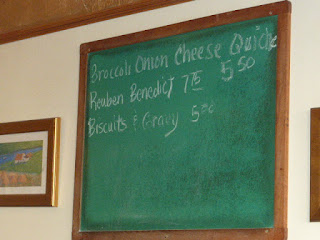 One of the internet food rating site said the  the Pastry Shoppe had "a very limited menu". What the hell, this isn't Applebee's.  This is real local food prepared when you order it. *sigh*

Okay now pictures. This is why I have never ordered steak and eggs in the past.


I chose the Reuben Benedict - homemade Hollandaise sauce (simply amazing!) poured over a couple of eggs on corned beef, piled on a hearty biscuit baked that morning. 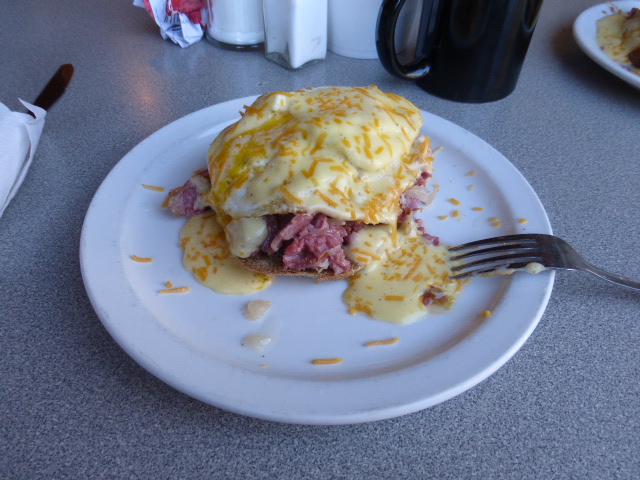 And yes, Brett makes his own corned beef from scratch from prime sirloin beef. Maybe the best $7.75 I have ever spent. If I happen to die in the next decade or so, I want Brett to cater the funeral meal and John Pieper from the Village Hall to select the wines - yes wine, lots of red wine.

See you there. - Gunnar
No comments: 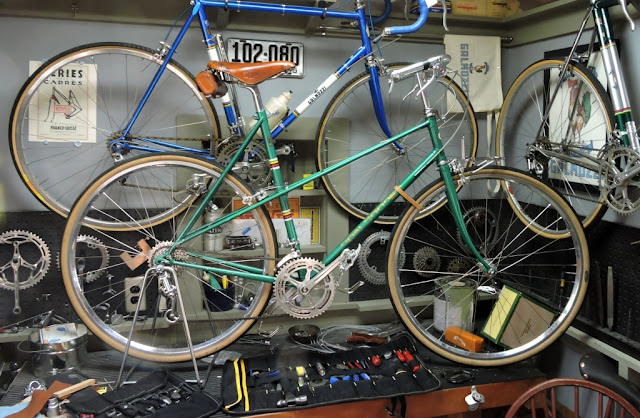 The brake calipers are vintage Dia-Compe pulled with Weinmann levers which have been filed, cleaned and polished. The little Dia-Compe front rack is likely going to be history for a more elegant option which is still in a drawer.

I was going to use a set of those Suntour shift levers which mount on the stem. Yesterday I was talking to Mark Stonich who has forgotten more about commuting on upright bikes (and 'bents) than I will ever know. He said upright bicycles tend not to be as stable as a drop bar bike and he was never very comfortable moving his hand to the stem and he prefers bar-end shifters. I bought in to his experience, but I can only find a single of a pair of vintage Shimanos I have ...er, had. How on earth can a person lose one of a pair? - like misplacing a left shoe.