Minneapolis singer, born in Hibbing, Mn. She attributes her clear enunciation to being a victim of the Minnesota tradition of choral music. This one is going out to everyone who is older and happens to be named Tom  Sanders. Enjoy.

Great guitar player. Great songwriter. Wrote  lot of songs for other people. He was really laidback - always seemed a little embararrassed to sing or play in public. He just died at 72 years of age.

On Wednesday we went over to the 'Boro and I had my first bike ride since my surgery. I rode my white Chris Kvale for the first time in a while. It was exhilarating. I had forgotten what a glorious bicycle it is to ride. I'm certain my weight loss also contributed to my feeling of flight. A year ago I put a Galli rear derailleur on it - only 'cause it's anodized a pimp blue color. The only downside to this derailleur is that it won't swing far enough inboard to catch the big cog on the derailleur. I suppose I could find a spacer to kick the freewheel out a little. It never makes any difference except climbing up Church Hill in Lanesboro to get back to the cottage. Don't know who I'm kidding; I couldn't make that hill no matter what my gearing was. 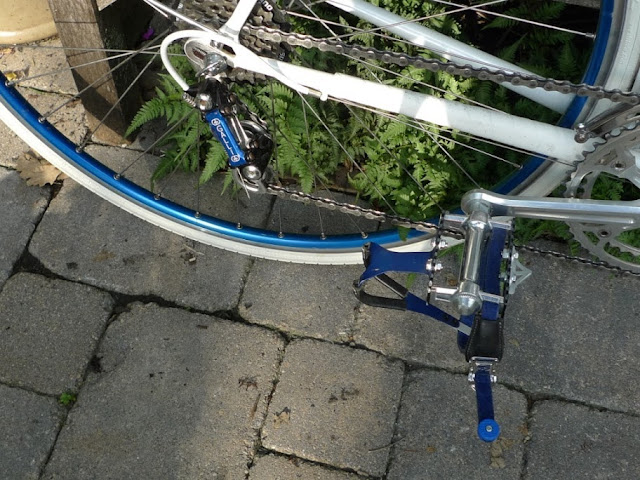 Yesterday we went from Lanesboro to Minneapolis to shuttle some furniture and celebrate my daughter's 28th birthday. We talked, ate (and drank beer) at the Northbound Smokehouse brewpub. Beer, wild rice, smoked fish and meats - that's about as Upper Midwest as it gets. We ate inside because it was chilly, but it was still really good eating, and it didn't break ol' dad's bank. Two thumbs up. Thanks to everyone. 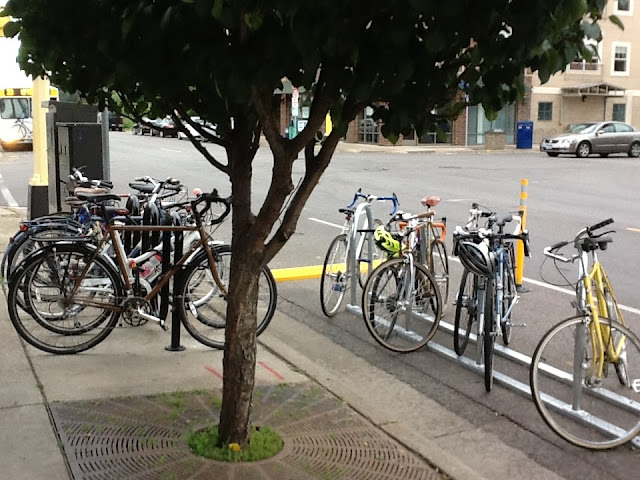 Here's shot of the Northbound bike rack. All steel bikes with horizontal top tubes - no carbon, no titanium, no aluminum. Steel rules. At least in conservative Minneapolis. ;-)
No comments:

I had my right eye operated on yesterday - cataract removal and a prescription lens implanted. Today I went in for a follow up. I had three people examine me today, but I'm really only interested in the opinion of the surgeon. He said my left eye, done last week, has healed remarkably fast and is virtually healed. The right eye is still dilated a little so that vision is fuzzy. He said unless some unforeseen problem shows up I should be able to ride my bicycle in a week. I've been planting trees and moving a lot of rock and gravel recently. We didn't actually discuss heavy yard work, but I think the implication is that that will be okay then too.

I couldn't help but notice that I am always the youngest person by ten years in the waiting room. I asked the doctor if that didn't get a little depressing after a while. He said on the contrary, it was very gratifying. He is giving people new life. Often they haven't been able to drive, been able to do things that make their life fulfilling and he is able to give that back to them. That morning he talked to an older woman who hadn't been able to do her hardanger embroidery for years and now she can again. Obviously my vision was shortsighted.

I'm not going to take up needlework, but I can see better than I ever could. I probably will get glasses, particularly prescription sunglasses for driving, but right now I'm operating with $9 sunglasses and a pair of cheaters from Walgreen for reading. Gosh, it's great so far.

Late last night I sat on the Lanesboro deck. The 'Boro has very little light pollution - few street lights, etc. It was a clear night and as I listened to the distant cattle down at the livestock barn complaining about death and taxes to the coyotes up on the north rim, I sat bedazzled by the night sky. I didn't realize my stars had become vanishing fuzzy spots of light. Now they are tiny crystals of light on black velvet. I will never take a night sky for granted again.

My vision in the left eye went from 20-450 to 2-30, but I will still need glasses to deal with my severe astigmatism. Next Thursday I have the right eye done and after they stabilize I get new glasses.

May all your visions be beautiful.

Be well and take care out there,

Lorna's family and Addy and Abby are coming down from the Twin Cities this afternoon. Summer food on the deck, fireworks, etc.

Yesterday morning I had a physical. The results were really good. I have lost 50 pounds in the past year.  Right now I'm 6'- 1+" and weigh 205. I would still like to lose another 20, but it's not exactly melting away. More importantly, my blood pressure is 118/74 which is pretty good for a 68 year old man.

I had good intentions of really cleaning up the garden in the afternoon, but The Judge stopped by and invited me to help him deal with his excess supply of craft beer. After an hour or two in his gazebo working on the beer problem I went back down to the Growlery.

I was about to fire a cigar when Bracker stopped by on his bike (no potential DWIs) and just happened to have four beers in his pack. So we spent an hour or more sampling his home-brewed Irish red ale and an Ambrosia hopped ale. Both very nice.

As Bracker was getting ready to get on his bike and wobble back home, The Lighthouse Keeper arrived packing a noticeable thirst. Another hour or two slipped away - it was dark, Lorna was back from yoga and we went up the house.

I didn't get any weeds pulled and I missed two meals, but I don't think my calorie intake suffered for the day. I wonder why those pounds aren't falling off?
3 comments:

Two or three days ago he got to the Canadian border where his quest ended because high water had washed out the trail and roads. Good job overall.
No comments: