(This is as much for my future memory as it is for other readers.)

Two days ago I took my M.Bonvicini frame to a remote shop south of Ames, Iowa. Mr. Jeffrey Bock has been building bicycles and doing custom painting for over 45 years. He does not have a website. People who know, find him. Here is some of his work, both frame building, racks and paint. 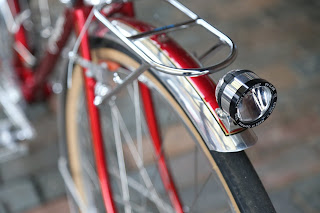 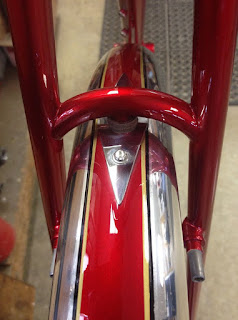 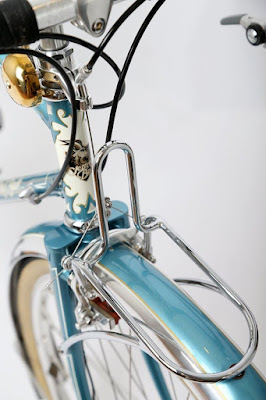 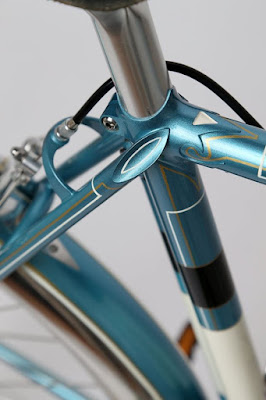 Mr. Bock clamped the 1948 M.Bonvicini frame in a vise stand, strapped on his jewelers headset glasses and began slowly rotating the bike around like a clock, softly mumbling colors as he gently scratched at the degraded silver decals with needle-sharp awl. 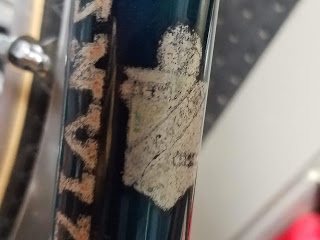 Then he removed the headset magnifiers and delivered the bombshell as he carefully made notes on a pad. (conversation condensed as recalled)

"The old decals oxidized and degraded down to that faded silver carrier. Originally the lettering was red with silver or gold edging - more likely gold, which was popular at the time. (What?! red, not silver?) The shield on the downtube was multicolored, probably matching the head badge. That dark line at the ends of the downtube panel isn't a pin-stripe at all, it is the original dark panel color which was protected from light fading by what appears to have been be a 1/4" wide World Championship Stripes (*). I think I may be able to save the seattube panel paint and closely match the downtube panel. For its age the paint is remarkable and we have to save as much of it as is absolutely possible."

It was good to hear that coming from a man who makes a fair amount of his living refinishing vintage bicycles. I obviously have the right man. I also have the right decal maker. Both have taken ownership in this project, in this bicycle. Now I have to process all this - and to consider a second set of new decals made.

*This bicycle was likely built by Francesco Galmozzi who, when he was with Gloria, built the bicycle that Libero Ferrario rode to the 1923 World Championships. Galmozzi seemed to favor World stripes after that and used them on his frames whenever possible. (Francesco's son Angelo built the 'Flandria' labeled bicycle that Rik Van Looy rode to the 1961 World Championship.) 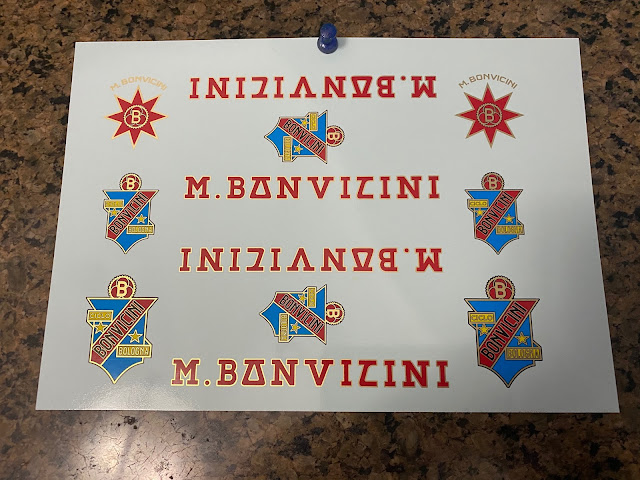