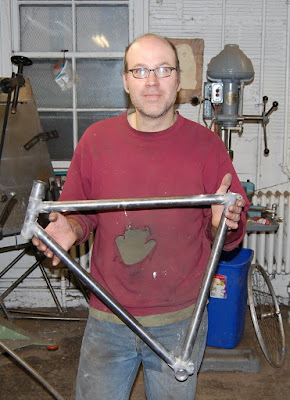 I stopped by to talk to Curt Goodrich about final braze-ons and paint colors for Addy's bicycle. Curt is a relatively young man, but he has built over 1,700 frames. That's a lot of cutting, brazing and filing. He has definitely mastered his trade.

While I was there, I met the now famous Bob Brown for the first time. Bob was recently covered in an article in the Rivendell Reader for building a bicycle for a gentleman who weighed over 500 pounds. Thanks to Bob, his bike and the man's will power, he now weighs just over 200 pounds. While I admire Bob's skills, I admire the man who was able discipline himself that much even more. Continued power and good life to him. 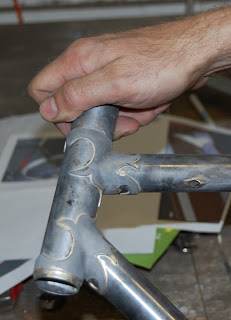 The close-up shows the head tube lugs of Ad's bike. Curt files the shoreline profile of the lugs before brazing, then after the frame is assembled he will thin the lugs down with a file.

I have changed my mind a dozen times on colors. While Curt and I were discussing and I was try to describe paint colors by drawing pictures in the air with my hands, Bob excused himself into the conversation holding a paint can lid, wet with a dark merlot red. A color so good you could eat it - or drink it. In my mind it will forever be "Bob Brown Red". Thanks Bob, I appreciate the help.

The photo below shows the rear dropout surrounded by the organized chaos of a frame shop.

THE CAN LID SHOWN IS NOT BOB BROWN RED!!!

Addendum: Bob Brown Red is out, in favor of green and yellow - Limetime Pearl with Lime Gold trim, by House of Kolor. Funky colors that, as Curt says, "Really pop together". 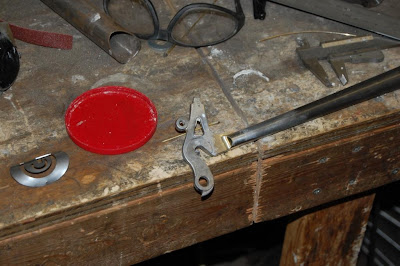