“There is no sun without shadow, and it is essential to know the night.” ― Albert Camus 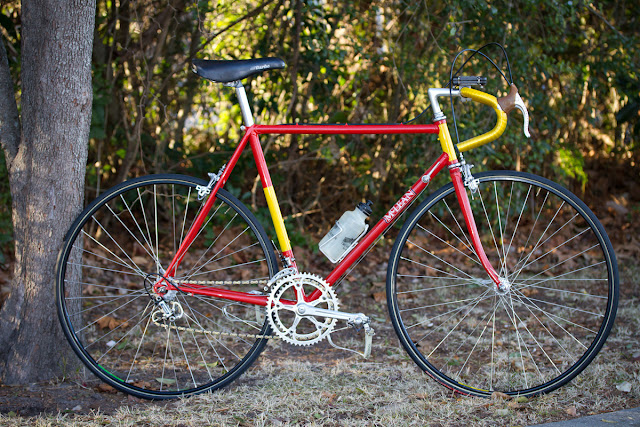 This McLean showed on a blog named Prolly Is Not Probably, which generally is a single-speed hipster world, which as an over-the-hill roadman, I generally do not relate to. Initially I expressed some disbelief that the paint color was original, as it is everything that McLean Fonvielle was not. It is an Anti-McLean. After a couple of email exchanges with people who would know better, Dale Brown in particular, it turns out that once again I was wrong. Wrong. Again. This has been repainted, but that's it's birth colors. More pictures here, or if you just want to go over to the dark side for a while. Link.

What is odd sans the colors isn't that the Kvale scheme?

Yes, but Chris pulls the seat tube panel up a little higher. To my eye a McLean with a seat tube panel looks odd because there isn't any graphics, which for me is the purpose of the panel.

nothing on the head tube, either, so the contrasting head tube and seat tube panel are both sans graphics. i never saw a performance bike catalog from the era when mclean frames were in it, but i have a feeling i was born too late and would have enjoyed that long long ago.

chris kvale's work shares an aesthetic sensibility with mclean/silk hope frames; it is a damn shame that mclean fonvielle did not have the opportunity to refine his craft over many decades.