Floating Deep In the Driftless

I posted the food on Facebook yesterday as it happened. I like to eat at a place where a handwritten menu is passed from the next table or the waitress as she pours coffee. I chose the shrimp tortellini alfredo and Lorna had the smoked salmon salad with a raspberry pastry as an appetizer. Really incredible food - food that you let lay in your mouth as long as is polite because swallowing it ends the experience. And besides the whole idea of  food pictures is kind of hilarious. 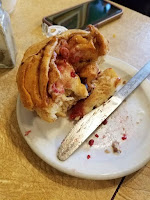 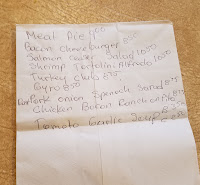 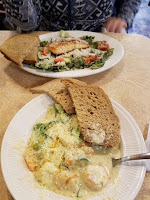 After the early lunch at the Pastry Shoppe we had a little time to kill until The Clockworks opened at about 1:00. We had a old family clock that had quit ticking a number of years ago. It just sat up there on a cabinet, staring down on us with its sad 4:20 o'clock face.

Lorna wandered off to "shop", something I do not fully grasp. I really do not mind buying things I need or want, but the process of looking and hoping to buy something unexpected ... oh, nevermind. While she was browsing, I walked up the street to the Root River Rod Shop. I rarely actually buy anything, but Steve Sobieniack is pleasant, intelligent and passionate about his interest.

Steve shared his future plans for expanding the sales area into the back room and upgrading the shop where he builds bamboo fly rods. As we were poking around the back rooms there was the music of Hoagy Carmichael drifting through the shop. Steve explained it was for Hoagy B. Carmichael, an old friend who had called the night before. Hoagy the younger (now 84), was a rod maker, a disciple of Everett Garrison, a master rod maker. After Garrison died, Hoagy B. wrote a book about about him and the process of building split cane rods. The book has sold 22,000 copies and was a major impetus for a new renaissance of handmade rod and fishing with cane. 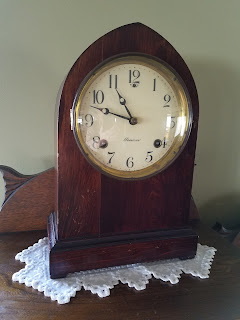 About a month ago, Goodie Goodwin, the clock man, called to tell us the clock had been repaired. The clock is now back home in Oakwood. (The Hardanger cutwork embroidery was made by a younger-eyed Lorna.) The clock should now outlast me.

We occasionally stop at a diner in south Jersey on our way to the beach house. The waitress, Mary, has the evening's specials plus the soups of the day hand written on the back side of a page from her order tablet.

We also have several old clocks from both sides of the family which either run when they feel like it or not at all. I need to find a good clock man. Good clock men are thin on the ground in these parts. I've yet to trip across a clock woman, good or otherwise. Hand written menus and contrary old clocks that fail to report for duty; who knew that these things were universal?