I found this unposted story the other day..


We were in a booth at the Blue Onion with our friends Brian and Jutta Plath, drinking craft beer (and red wine with ice for Jutta), eating charro bean soup (most meals in The Valley begin with charro bean soup, ordered or not), flat breads, dips or wraps, most covered or filled with pesto, goat cheese, shrimp, humus, etc - eating fine things that my friend Bill once called "liberal elitist food" .... as if that was a pejorative.

Brian is a hail-fellow-well-met (just wanted to use that one). His wife Jutta is a native of Frankfurt, and has a kiss of a German accent. Our conversation turned to stories of trips and vacations gone bad. Brian began his tale of woe, with Jutta expounding and correcting.

They were birding the Salton Sea. It had been raining and they were excited to finally be out looking for birds along narrow clay maintenance roads. Jutta: "I told him not to go down that road, but he wouldn't listen! He never listens." Brian said the road was so slippery the truck would slide sideways even when they weren't moving. Of course they ended up in the ditch. (And recorded it.) 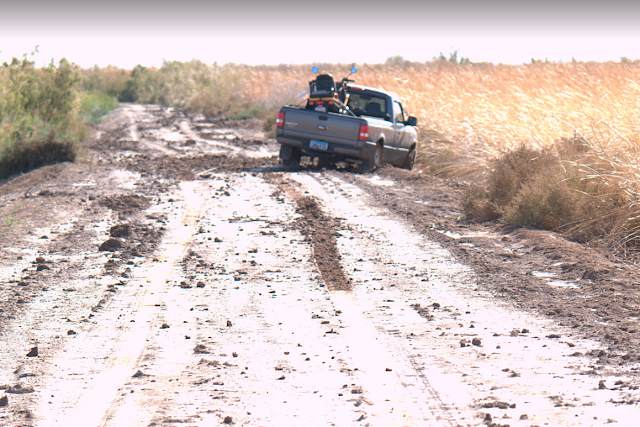 Brian took out his cell phone and found the number of the local AAA tow service. They just said, "We don't go out there." What? "We won't go out there for any amount of money." Jutta: "I told him we shouldn't be out there." After calling all potential tow services it appeared their only option was walking out, then going back for the truck later when the road was dry. Jutta: "Every step we took our shoes got heavier and heavier from the clay. It took us forever to get to a house."

They walked for hours until they came upon a shack out in the middle of nowhere. They could hear activity through the open screen door, but no one came to the door when they knocked, so they stood and hollered. Eventually a nervous looking man with a gun came to the door. No one EVER came to their door out there.

After an offer of a substantial amount of money, the fella led them around back to an open garage where there was an old 4-wheel drive truck with huge tractor tires - a mud-buggy. It turned the man's job had been turning valves to manipulate water levels and the truck was probably the only way out of there after heavy rains. He put a battery in it and strung an extension cord to the shed to charge it enough to crank the engine. And then it was out of gas. They had to siphon gas out of a barrel.

Then the guy said, "My wife is gone, so my kids will have to come along." So the Samaritan for hire, Brian, Jutta and three kids all wedged into a glorified pickup and headed out into maze of mud roads to find the truck. They had lost their bearing walking out and couldn't tell him where it was so they followed the footprints out to the truck. He hooked on, pulled it out and towed them until they reached decent roads.

A tale as I remember it being told to me.

Ugggh. We've birded down in that area and were told by a few local birders NOT to go down those clay roads after a rain. We listened.