Frank gave this to me a few weeks ago. He figures he made over 40,000 spoons and other kitchen utensils between his mid-life and when he walked out of his shop on his 65th birthday. The high heel spoon was thrown into a box in the corner to rest for 20 years, waiting for its Cinderella, because the limb it was carved from had a nail embedded in it. On the bottom of the heel it is noted in black India ink: #894 Frank Wright 1993. Frank said that somewhere long the line he thought, "I'm not a numbering kind of guy, I don't even fold my underwear, why am I numbering these damned things?" An early, numbered Frank Wright? ;-) With the framing nail upgrade? Wow! 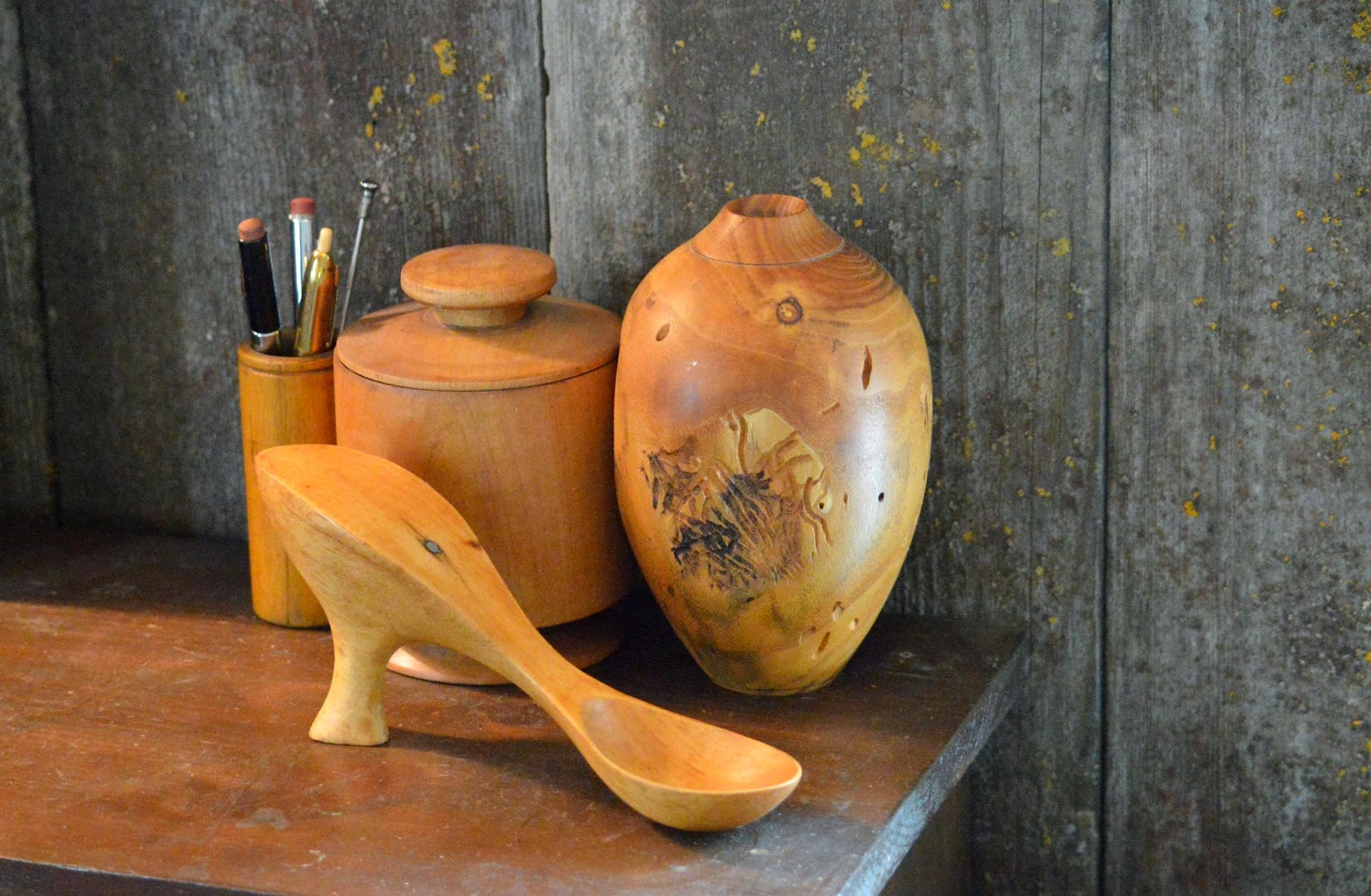 Stories? Just to prove it is possible to write trivia that only three people in the entire world (counting myself) care about, here's a tour of the picture:


The wall panels are weathered redwood boards recycled from the fence in front of our house. You remember, the fence that the neighbors would look at as they walked by - and stop, silently shaking their heads in a tsk tsk.

I bought the desk at an estate sale for $15. Actually I paid $25 for the desk, but I re-sold a couple of other items I had bought to an antique dealer for a $10 profit before I had technically paid for them myself. $15. The desk ain't much, I may have gotten taken.

To my eye the vase is beautiful, an opinion not shared by everyone in this house. It has worm holes and a couple of flat sides with worm trails. The interior is fully hollowed out and smooth to the touch as far as my finger can reach. I have no idea how that was done. Unfortunately for the life of me I cannot remember the name of the guy that turned it.

The lidded cup was made 50 years ago out of a broken hard rock maple bowling pin by Joe Koevnig. The walls are amazingly thin and the top fits quite tight. Nice job. It's empty. I'm saving it in case I ever find a pocketful of precious things.

The small wooden cylinder originally had a threads cut into the wood and a screw on wooden cap. It was in my grandfathers tackle box, containing a small bottle of fine oil. The threads had become stripped and split so eventually I cut them off. The pens and pencils are old giveaways advertising things like Bud the Bailer and Berg Corn Shelling. My father as a young man.

And a heavy piece of bicycle spoke cut out of a vintage Galmozzi wheel for punching out cheap plugged cigars.

That particular spoon was made in St Bonifacius, MN a few months before I moved to Lanesboro in the fall of 1994. When I decided to make a series of "Imelda Marcos" shoe spoons I borrowed a high heel from my friend Ann Gilbert to use as a model. Interestingly enough, her family I believe was originally from Albert Lea. Her brother Mitch lives in rural Lanesboro. The spike visible in the middle of the spoon wrecked a perfectly good bandsaw blade, one of the hazards of using reclaimed timber for spoon making. I've used hundreds of bandsaw blades and perhaps 10% succumb to a similar fate.

Thanks for the info. I'll have to save it to paper and memory.