When this I purchased this bicycle I assumed I was buying a bastardized touring bike because of the fender bosses, cantilever brakes and triple crankset. After contacting Peter Mooney, who is still building frames in the Boston area, I was surprised to learn that it had originally been built as an upright town bike, apparently for a hilly neighborhood. Initially I rebuilt it with that in mind, but was never quite satisfied with the feel of the upright bars. It has since evolved into a bike with stem mounted shifters and dropped bars mounted very high to accommodate my stiff 62+ year old back. 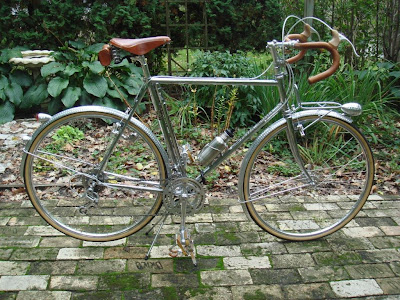 Although this bike is very French in attitude, if not geometry, it is an American frame, built by an Englishman, with mostly Italian components. The frame is made of Reynolds 531. At 1.0/.7/1.0 and with a sprung leather seat, it's a little heavy, but the light spokes and wide, light tires, make it feel fast and quick, yet with a ride like an old Buick. The frame is a little small for me and visually the bars are too high, but at this point in my life, it feels right. But make no mistake about it; this is an old man’s bicycle.

Below is the bike as purchased. The only components still intact are the headset, crankset and bottom bracket. 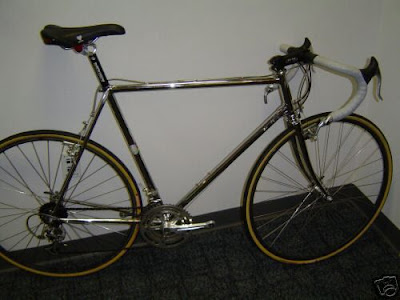 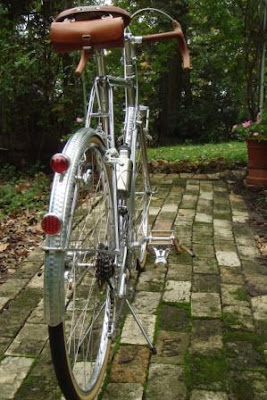 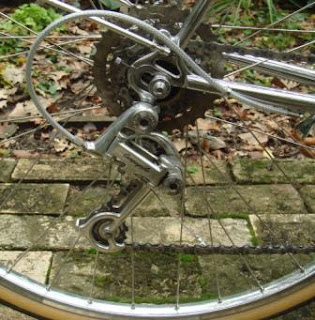 Late 1980s Campagnolo Rally derailleur; Campy’s last gasp effort at touring components. They finally got it right and then quit making them.
Whisper quiet IRC 7-speed freewheel. We’ll see if its reputation for
shucking its bearings on the ground under stress is
deserved. 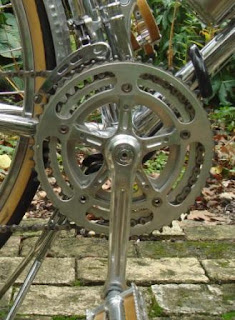 
The front derailleur is an early 80's Campagnolo Super Record. 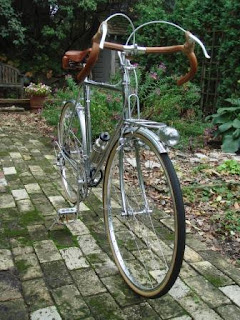 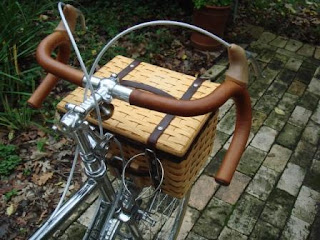 The Nitto Grand Raundoneur (sic) bars are covered with elk leather and are mounted to an Ambrosio adjustable stem. The stem-mounted shifters are ratcheting Suntours.
I have an additional Nitto bottle cage mounted to the basket for morning coffee or a second water bottle.
Also note the obligatory "On your left!" bell under the stem. 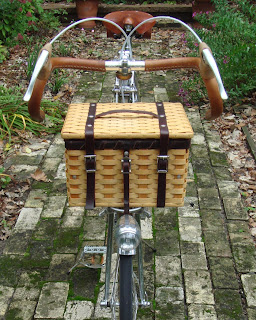 The leather trimmed Amish basket was made by my friend Eli R. Hershberger. The basket detaches from the rack by releasing the buckle of the toe strap at the front. Neat, I think.