Lucky Lestrud was over a couple of days ago and we spent 5 hours getting in trouble. Lestie is a rum connoisseur and is sitting on 5 cases of a Barbados rum that is so obscure that it can only be purchased in one equally obscure liquor store in the world. And that is not hyperbole. Even with the aid of the internet and a credit card with a high limit, you cannot acquire this stuff. Sworn to secrecy, if I told you any more I would have to kill you... just let it be said that this is the Nectar of the Gods and after five hours we had not finished tasting it, nor finished discussing religion, bicycles, politics and family. The third passive aggressive phone call from his wife convinced us we were finished ...temporarily. 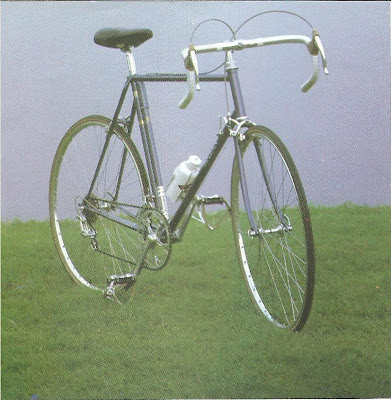 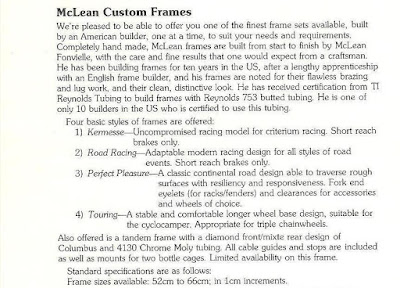 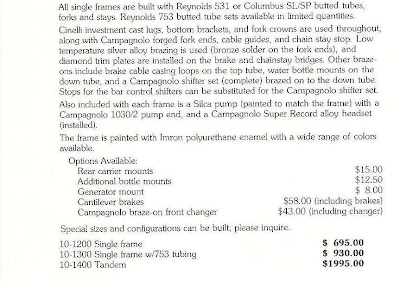 Lestie had a bicycle shop at one time and he brought over some books, tapes, old Campagnolo catalogs and some 1982 Performance Bicycle catalogs. At that time Performance Bike was 28 pages of high end components, one of the places where guys in Jerkwater, Minnesota could get outfitted with Campagnolo gear or fine frames. On Page 6 of the Fall/Winter catalog, along with Pinarello and DeRosa, there were McLean framesets! One of the things that jumped out at me was that in 1982 you could buy a Pinarello frameset for $495, for $595 a DeRosa, and for $695 a McLean. If you wanted a McLean made from the new exotic Reynolds 753 it was $930! I don't know how much inflation there has been, but $930 had to be about as much as you could spend on a bicycle frame in 1982. My McLean is virtually identical to the photo, even in size and color, except my mine has fastback seat stays and the older Cinelli pressed steel lugs rather than the investment cast lugs advertised. Also, even though M05030 is apparently also a "Perfect Pleasure" model, it does not have the fender eyelets shown. It is kind of poignant, by the time the catalog was printed and distributed, McLean Fonvielle finally making the bigtime, he had died unexpectedly of a heart attack at the age of 29.