There are some that say that handbuilt bicycles have souls, that they carry part of their creator with them. I don't know about that, but if they do, McLeans, built by the late McLean Fonvielle with simple hand tools, without modern power equipment, would have soul in spades. That's why this one hurts a little to look at.

Bicycles are not like automobiles, Duesenbergs for instance, where the location of every one is know by the aficionados. That said, because there are relatively few McLeans out there, it is rare for one to show up unexpectedly. This one did. This is clipped from an e-mail yesterday from Jack Gabus:

When I first saw a McLean I fell in love because of it simpleness (is that a word). So I started looking for one when Mike Schmidt got a hold of me and said there was one chained to the parking meter in lower Manhattan outside his office (see attached pics). He and I went on for about a month with this when he finally met the owner, some beautiful blond in the advertising Biz. I finally got her e-mail. We went around and around on this. I even offered to buy her a brand new single speed. That is what she had turned it into. 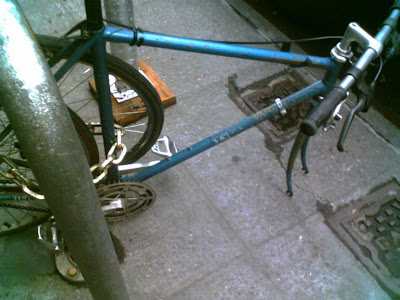 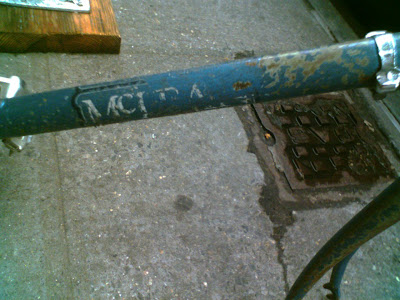 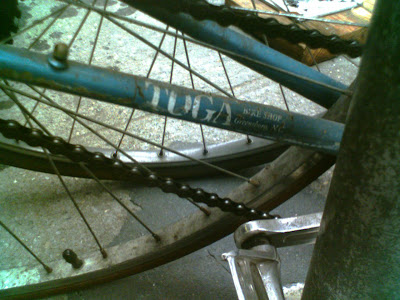 This bike was originally purchased at the Toga Bike Shop in Greensboro, North Carolina, which later became Cycles D'Oro. How did she get from there to the single-speed streets of New York? How does a world class athlete fall so far, to become a grungy, rusted street bum chained to a post? Drugs? Alcohol? We'll probably never know. God bless her and maybe some day Ms. Blond Bombshell will pass her on to a loving home where she can be looked after better in her old age.

Don't you blasphemy in here.


Don't You Blasphemy In Here!

And Mayor Bloomberg claims the crime rate in NY is dropping.

Michael,
The previous offers have been high, including replacing it with a new bike. $300 won't touch it.

I'm your huckleberry.
The bike is being ridden. The lady doesn't want some piece of crap replacement; she likes her current bike.

It seems to me that it is just fine like that. How is it a Higher Purpose for that bike to be owned and (I'll grant you- this aspect could be just in my mind) garaged/trailered by someone else?

Huck.
Of course you are right to a certain extent. It's just a bike, it's hers, she can wreck it if she choses.

Of course The Mona Lisa is just a painting, The Peita just a sculpture. People have a right to drill holes in Strads, electrify them and paint them orange. Or chop and channel a blower Bentley. It's all a matter of degree I suppose.

I just wish she'd at least grease the chain.

Bikes are for riding. She's riding it and not wasting all the fuel and labor it would take to replace it. Heartbreaking sometimes til you remember that it is a vehicle first.

A vehicle first?...or a mobile sculpture that just happens to have a saddle on it.

I suppose a true vigilante man would cut the lock, liberate the McLean, and leave a new/solid replacement in it's place...

or bring some framesaver and chainlube, give it a tune up while it's locked up, prolong the inevitable.

Vigilante? What would Edward Abbey do?

I'm on the statuesque bombshell's side.

I know you well. I wouldn't expect more or less.

Mike and I considered chain cutters but you Never ever want to piss of a beautiful Blond! Refer to Tiger Woods. Besides I still email the blond every six months just for the hell of it.

The McLean is under survailance it could be freed in the next month.

Recovered and being repaired.

Recovered and being repaired.

So, almost 3 yrs have passed. Any photos of this rolling piece of art? or the blond bombshell for that matter?