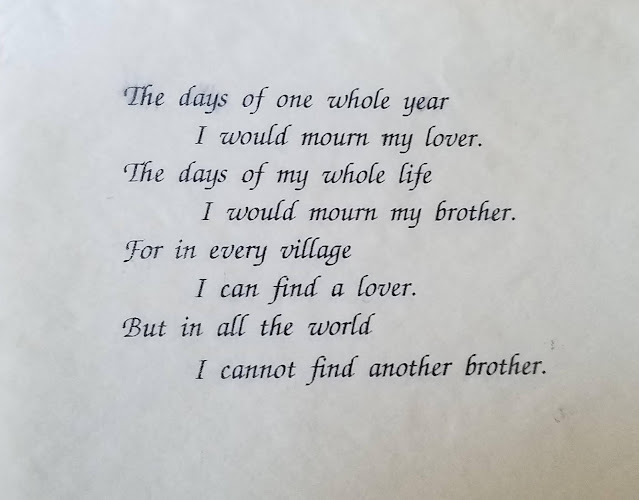 For the past ten days my brother was in an induced coma on a ventilator with a tube into his windpipe. The Mayo doctor said if he DID survive, his best possible long term outcome would be living with permanent tracheal breathing and a feeding tube into his stomach. Only one long term facility in the state, in Minneapolis, is equipped to deal with such a resident.
The doctor said that might be a satisfying life for some people.

"Would Elbert be living a fulfilling life not eating, talking and living away from family?"
Would Elbert be happy not doing everything he lived for?
My sister, Lona and I stood outside the glass door. A doctor injected morphine, two nurses removed the breathing and feeding tubes. It took half an hour of slower and slower shallow breaths, seconds longer between each breath until breathing was not perceptible. The doctor checked for a pulse with a stethoscope, checked his eyes with a light for pupil dilation. There was no declaration of death, she simply removed her rubber gloves, sadly nodded and moved on to her next patient.
I asked a nurse how many actually recovered and walked out? Virtually none. Realistically it is a ward is where people go to die a slow, horrible death. As we about to leave, my sister observed, "Day after day of this, those nurses and doctors are going to need emotional counseling forever.
It isn't right. Life is not supposed to end this way.
And we left for home to make arrangements to bury our brother. My second younger brother. Life and death are not fair.
- G.

I'm so sorry that this happened. No one should ever have to make a decision like this one to remove life support. Even though it was the right decision, it still hurts like hell. I hope it's a bit healing to visit with other family and tell stories about Elbert. (((hugs)))