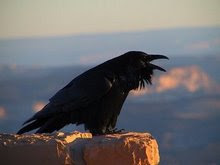 Two days ago I sold the green Kvale to the Black Raven. This afternoon it was a bittersweet feeling as I disassembled it for cleaning and shipping. This was the 5th bicycle built by Chris Kvale in 1985, almost 25 years ago. He built it for himself. When a master bicycle builder builds one for himself, it's right. He rode it for years until Tom Sanders cajoled him into selling it. I originally bought it from Tom as a fork and frame after it didn't meet an Ebay reserve price. It wasn't given the respect I felt it deserved. I spent the next few months pulling together proper components. This one is special enough that the things I bolted on it had to be right. I consulted with Chris on the parts. I got lucky on the wheels, virtually new first generation Phil Wood hubs. I found a partial Campagnolo Super Record group in Switzerland that was almost unused. Eventually it all came together.
It's a nice bike, a very nice bike, nevertheless it was not a relationship that was meant to be. It was too small for me and it didn't grow with time. Lorna didn't like the idea of an unridden bike blocking the hallway. The Raven mentioned someday he would like a... and he listed some builders names and his size. I had a bike on his list, he needed it, and he will ride it. His wife gave it her blessing, or at least tolerance. It needs to be ridden. It's not like a divorce. It's more like giving up a daughter to go away with a fine young man. You know it's the right thing to do. But it still hurts just a little. 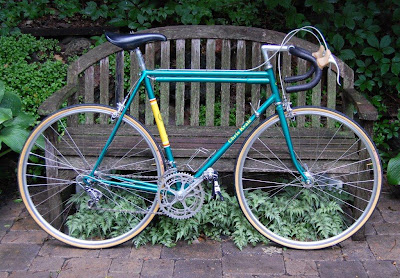 This noble beast photographs a teal green. It's not. It's Imron 14283 Jade. It's damned Green Bay Packer green and yellow. Did I mention the Raven is originally from Wisconsin?

The green Kvale is a brilliant restoration and Raven is fortunate. Has Lorna realized that she has created "gallery space" and that the next restoration draws nigh?

Hamachi- care to cram the fattest tires you can in that matchine and rally the shit out of it while pounding cheap canned beers?

Rev, You are a Hamms swilling miscreant. Leave the lad alone or we may have to have you offed.

There is a Cross Machine on my horizon. It's been out there awhile, but it's getting closer.

Then I shall follow the Reverend into the Moonlight.