There is a lot of art and live music in the Tofte, Lutsen, Grand Marias area - painters, potters, old folkies and bluegrassers playing in the bars, on street corners, we even bumped into a singer with an open hat at a bookstore. A very serious bookstore. A bookstore where poets come to read their poems. And people listen.
By far the most satisfying group we heard was Wild Mountain Thyme, a family group singing mostly Irish music - and a little Dylan. Damned fine Irish music it was, driven by a thumping bodhran drum and led mostly by the matriarch, Michelle, who on the evening I shot these pictures was having a birthday. I won't say how many, but I will say she looks pretty damned good. There was a surprise party for her, starting off with a Scottish bagpipe player, who mercifully ambushed her with only two tunes. The volume of this war instrument in a small pub is pretty intense. Anyway, all of us in the pub got a lot of cake and the band just played the hell out of that evening. There were drums and penny whistles, fiddles and guitars. And enough Redbreast Irish Whiskey that Lorna started giving me The Look as our bartender Bob just kept pouring me another round.
My benchmark for best concert ever heard has always been 35 years ago, Willie and Waylon in their prime at Redrocks. This was a very, very close second. The husband (guitar) took videos of a lot of it. He was just exuding love and pride. He promised me he'll post it to YouTube eventually. Hell, he's living in a dial-up world. There is NO cellphone there. It's like living a small village that's one block wide and a hundred miles long - with miles between the houses. Which I suppose explains why people make music together in tiny pubs. I suppose I'll post it here if he does upload it, but some things are better just remembered in our minds where they can grow to maturity. 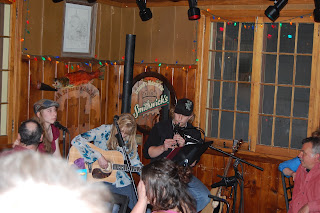 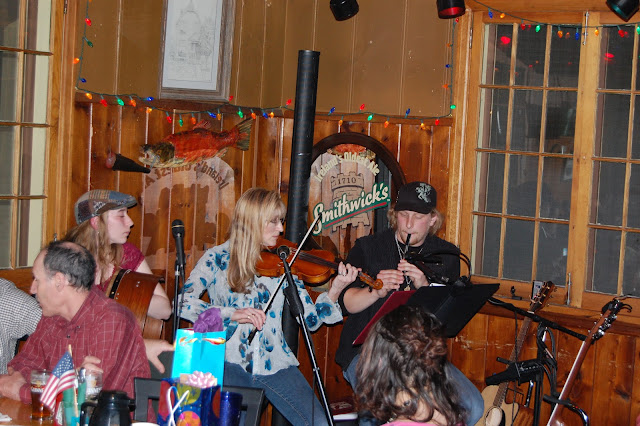 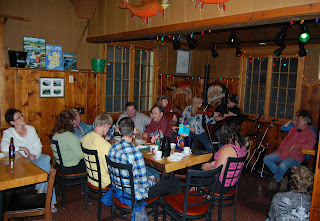 Oh, by actually measurement by this writer, the distance from O'Phelan's Pub to our cabin door was exactly 71 paces. I thought you'd like to know that.

A classier crowd than that at Worth Brewing when the more calloused elbows are vying for King and Queen. Or maybe its just because there's more light at O'Phelen's.

Far better, although if you google Bernie Kukar, you'll find he's one of the most hated men in the world of football fans. But a hell of a nice guy to spend time with - although his choice of drinks was questionable. Given one more evening I believe I could have converted him. Alas I ran out of time.